Eddie Gonzales Jr. – MessageToEagle.com – Astronomers have a model of how galaxy cluster collisions go through different stages, taking on various shapes. A blunt body shape turns into a sharp cone, which turns into a tongue-like shape.

The first and last have been observed many times, but the sharp cone was always missing, until now. 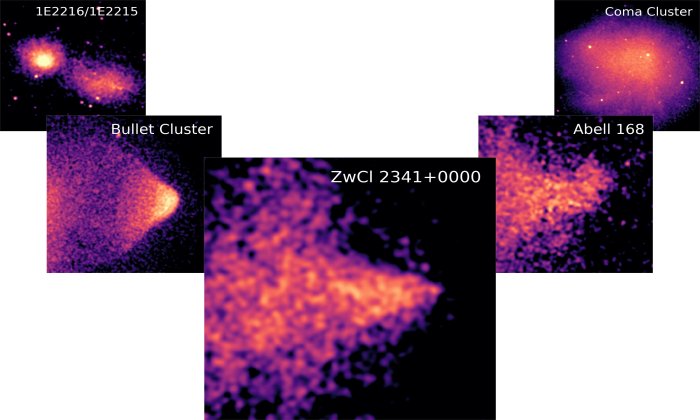 Galaxy cluster collisions go through different stages, taking on various shapes. The rough version of the model contains three stages: first a blunt body shape (see Bullet Cluster), then a sharp cone (see ZwCl 2341+0000) and then a tongue-like shape (see Abell 168). Until now, astronomers were still missing the middle piece of the puzzle in their observations. Now they have found it with ZwCl 2341+0000. In the upper left (1E2216/1E2215) you see two galaxy clusters prior to collision. In the upper right (Coma Cluster) you see the end result after the merger has taken enough time to reach its final form. These are all X-ray images showing the intracluster medium (ICM). The ICM is the matter that actually collides. The galaxies and possible dark matter drift along undisturbed, apart from a gravitational pull. Credit: SRON Netherlands Institute for Space Research

Most galaxies live in clusters: Groups of hundreds or even thousands of galaxies. In between, them is lots of space, filled up by a hot gas called the intracluster medium (ICM). Galaxies can be observed in visible light, for example with Hubble Space Telescope, but the ICM is only observable with X-ray telescopes because it is extraordinarily hot—hundreds of millions of degrees Celsius. With only 1 particle per liter, it is extremely airy, but since it occupies so much space it still adds ten times more mass to a cluster than the galaxies inside. The vastness of space inside a cluster also becomes apparent during a collision with a neighboring cluster. Galaxies simply drift by each other unharmed, while the ICM actually collides.

Astronomers have seen many stages of collisions across the night sky. All observed shapes are either a blunt body, like the famous Bullet Cluster, or a tongue-like shape extending ahead, like Abell 168. The latter is suggested to be one of the final stages of a collision, the former one of the first. Simulations predict that the stage in between should be shaped like a sharp cone, but this has never been observed. Now a group of astronomers, including first author Xiaoyuan Zhang (SRON/Leiden Observatory), has finally found this last piece of the puzzle. 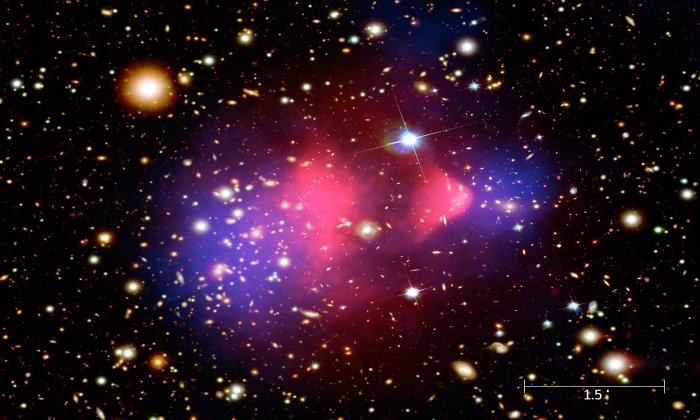 The team found the cone after performing a deep observation of galaxy cluster ZwCl 2341+0000 by pointing the Chandra X-ray space telescope at it for 55 hours. Co-author Aurora Simionescu of the SRON/Leiden Observatory said, “The sharp cone stage is very fleeting. It only last[s] for a short time so we are excited that we were able to catch it.”

Just like when in the old days farmers used to gain information about the weather from cloud shapes, astronomers study shapes of cluster collisions to learn more about the universe. The Bullet Cluster is probably the most famous example, as it is considered the smoking gun for the existence of dark matter. The ICM of both colliding clusters has slowed down, one side showing a blunt body or “bullet” shape. This is visible in X-rays (in pink in the images).

The galaxies, visible in regular light, are already much farther away from the collision center, as they don’t collide with each other and are only slightly slowed down by gravity. The majority of the invisible mass, mapped through gravitational lensing of background objects, has also moved along mostly unaffected (see blue in the images). This is evidence that this invisible mass is indeed dark matter, and not part of the “normal” matter ICM.

The new images of ZwCl 2341+0000 give us a sneak peak of how the Bullet Cluster might change its shape in a few hundred million years.