Eddie Gonzales Jr. – MessageToEagle.com – The formation of the Sun, the Solar System and the subsequent emergence of life on Earth may be a consequence of a collision between our galaxy, the Milky Way, and a smaller galaxy called Sagittarius, discovered in the 1990s to be orbiting our galactic home.

Astronomers have known that Sagittarius repeatedly smashes through the Milky Way’s disc, as its orbit around the galaxy’s core tightens as a result of gravitational forces. Previous studies suggested that Sagittarius, a so called dwarf galaxy, had had a profound effect on how stars move in the Milky Way.

Some even claim that the 10 000 times more massive Milky Way’s trademark spiral structure might be a result of the at least three known crashes with Sagittarius over the past six billion years.

A new study, based on data gathered by ESA’s galaxy mapping powerhouse Gaia, revealed for the first time that the influence of Sagittarius on the Milky Way may be even more substantial. The ripples caused by the collisions seem to have triggered major star formation episodes, one of which roughly coincided with the time of the formation of the Sun some 4.7 billion years ago. 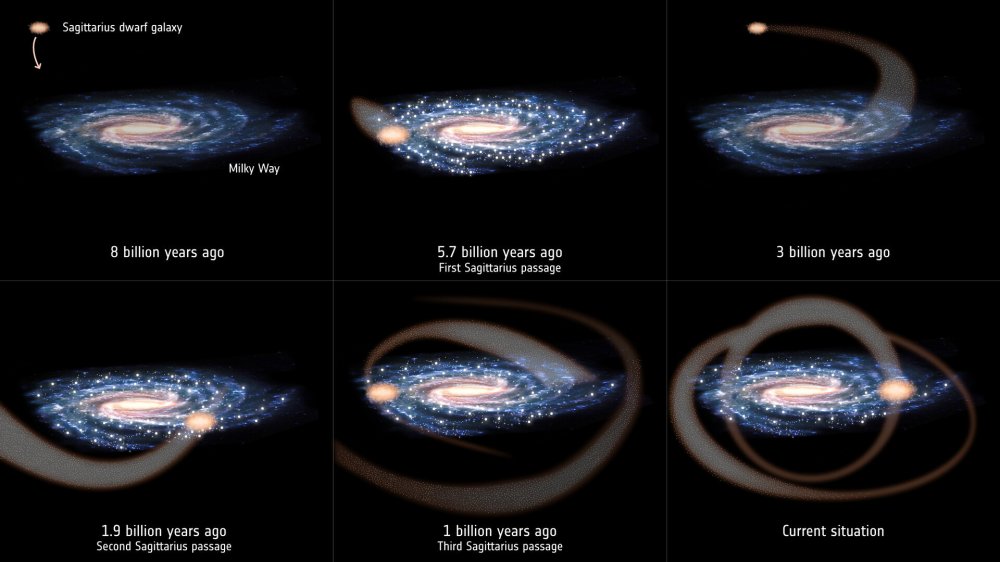 The Sagittarius dwarf galaxy has been orbiting the Milky Way for billions for years. As its orbit around the 10 000 more massive Milky Way gradually tightened, it started colliding with our galaxy’s disc. The three known collisions between Sagittarius and the Milky Way have, according to a new study, triggered major star formation episodes, one of which may have given rise to the Solar System.  Credit: European Space Agency

“It is known from existing models that Sagittarius fell into the Milky Way three times—first about five or six billion years ago, then about two billion years ago, and finally one billion year ago,” says Tomás Ruiz-Lara, a researcher in Astrophysics at the Instituto de Astrofísica de Canarias (IAC) in Tenerife, Spain, and lead author of the new study published in Nature Astronomy.

Ripples on the water

The researchers looked at luminosities, distances and colors of stars within a sphere of about 6500 light years around the Sun and compared the data with existing stellar evolution models. According to Tomás, the notion that the dwarf galaxy may have had such an effect makes a lot of sense.

“At the beginning you have a galaxy, the Milky Way, which is relatively quiet,” Tomás says. “After an initial violent epoch of star formation, partly triggered by an earlier merger as we described in a previous study, the Milky Way had reached a balanced state in which stars were forming steadily. Suddenly, you have Sagittarius fall in and disrupt the equilibrium, causing all the previously still gas and dust inside the larger galaxy to slosh around like ripples on the water.”

In some areas of the Milky Way, these ripples would lead to higher concentrations of dust and gas, while emptying others. The high density of material in those areas would then trigger the formation of new stars.

The birth of the Sun

In fact, it seems possible that even the Sun and its planets would not have existed if the Sagittarius dwarf had not gotten trapped by the gravitational pull of the Milky Way and eventually smashed through its disc.

“The Sun formed at the time when stars were forming in the Milky Way because of the first passage of Sagittarius,” says Carme. “We don’t know if the particular cloud of gas and dust that turned into the Sun collapsed because of the effects of Sagittarius or not. But it is a possible scenario because the age of the Sun is consistent with a star formed as a result of the Sagittarius effect.”

Every collision stripped Sagittarius of some of its gas and dust, leaving the galaxy smaller after each passage. Existing data suggest that Sagittarius might have passed through the Milky Way’s disc again quite recently, in the last few hundred million years, and is currently very close to it. In fact, the new study found of a recent burst of star formation, suggesting a possible new and ongoing wave of stellar birth.

According to ESA Gaia project scientist Timo Prusti, such detailed insights into the Milky Way’s star formation history wouldn’t be possible before Gaia, the star-mapping telescope launched in late 2013, whose two data releases in 2016 and 2018 revolutionized the study of the Milky Way.

“Some determinations of star formation history in the Milky Way existed before based on data from ESA’s early 1990s Hipparcos mission,” says Timo. “But these observations were focused on the immediate neighborhood of the Sun. It wasn’t really representative and so it couldn’t uncover those bursts in star formation that we see now.

“This is really the first time that we see a detailed star formation history of the Milky Way. It’s a testament to the scientific power of Gaia that we have seen manifest again and again in countless ground-breaking studies in a period of only a couple of years.”

“The recurrent impact of the Sagittarius dwarf on the Milky Way star formation history” by T. Ruiz-Lara et al is published in Nature Astronomy.