Conny Waters – MessageToEagle.com  – A huge statue of the god Horus, was recently unearthed during Egyptian-German archaeological excavations carried out at the Funerary Temple of king Amenhotep III. 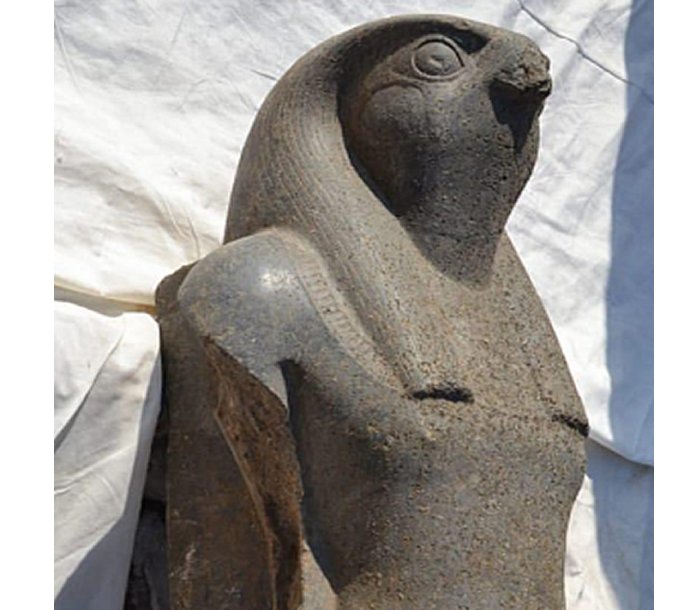 Colossus was unearthed at the Funerary Temple of king Amenhotep III. Credit: Ministry of Antiquities

The statue was found in the remains of the Columns Hall at the Millions of Years Temple of King Amenhotep III in Kom al-Hettan area on the western mainland of Luxor, according to Dr. Hourig Sourouzian, who led the team.

The statue is missing the legs, and the arms are broken, but the head and torso are very well preserved. The 1.85-meters-tall statue depicts the ancient Egyptian deity Horus wearing the divine pleated kilt held around the waist with a horizontally pleated belt.

The back pillar of the statue is unsubscribed.

Dr. Sorouzian said that the discovered statue is in good condition and that it possesses important artistic, scientific and archaeological value because it will contribute to enhancing the whole picture of the temple after its collapse due to a devastating earthquake in the 28th century BC.

Stone was used to building temples and other royal statues in the Ramesside period. It is now undergoing restoration and the mission will continue to excavate to find the legs of the statue, reports Egypt Today.

The team archaeological team also unearthed half statues of some other deities. One of such discoveries is the lower part of a seated goddess and the head of a god, both carved in granodiorite. The god is wearing a tripartite wig, and a wide collar -adorns his chest.

The mission earlier found several huge statues of deities and of king Amenhotep III and his wife Queen Ti, in addition to a large number of statues depicting Sekhmet, a warrior goddess as well as a goddess of healing, commonly depicted as a lioness. King Amenhotep III had built a large number of statues of the Goddess Sekhmet in his funerary temple, which he called the “Temple of Millions of Years.”

The goddess was very strong and at the same time, she possessed healing skills, making her a good protector of the Amenhotep III’s temple from diseases and other dangers.