Eddie Gonzales Jr. – MessageToEagle.com – Over the past 6 years, gravitational wave observatories have been detecting black hole mergers, verifying a major prediction of Albert Einstein’s theory of gravity. But there is a problem—many of these black holes are unexpectedly large. 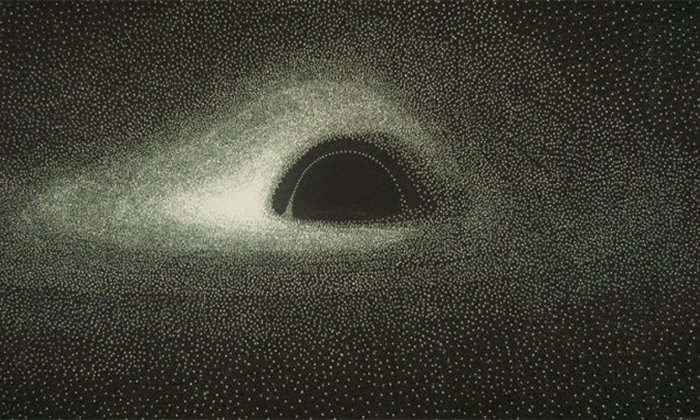 The first rendered image of a black hole, illuminated by infalling matter. In this study, researchers have proposed a model where these objects can gain mass without the addition of matter: they can cosmologically couple to the growth of the universe itself. Image Credit: Jean-Pierre Luminet, “Image of a Spherical Black Hole with Thin Accretion Disk,” Astronomy and Astrophysics 75 (1979): 228–35.

Since the first observation of merging black holes by the Laser Interferometer Gravitational-Wave Observatory (LIGO) in 2015, astronomers have been repeatedly surprised by their large masses. Though they emit no light, black hole mergers are observed through their emission of gravitational waves—-ripples in the fabric of spacetime that were predicted by Einstein’s theory of general relativity. Physicists originally expected that black holes would have masses less than about 40 times that of the Sun, because merging black holes arise from massive stars, which can’t hold themselves together if they get too big.

The LIGO and Virgo observatories, however, have found many black holes with masses greater than that of 50 suns, with some as massive as 100 suns. Numerous formation scenarios have been proposed to produce such large black holes, but no single scenario has been able to explain the diversity of black hole mergers observed so far, and there is no agreement on which combination of formation scenarios is physically viable. This new study, published in the Astrophysical Journal Letters, is the first to show that both large and small black hole masses can result from a single pathway, wherein the black holes gain mass from the expansion of the universe itself.

Astronomers typically model black holes inside a universe that cannot expand. “It’s an assumption that simplifies Einstein’s equations because a universe that doesn’t grow has much less to keep track of,” said Kevin Croker, a professor at the UH Mānoa Department of Physics and Astronomy. “There is a trade-off though: Predictions may only be reasonable for a limited amount of time.”

Because the individual events detectable by LIGO—Virgo only last a few seconds, when analyzing any single event, this simplification is sensible. But these same mergers are potentially billions of years in the making. During the time between the formation of a pair of black holes and their eventual merger, the universe grows profoundly. If the more subtle aspects of Einstein’s theory are carefully considered, then a startling possibility emerges: The masses of black holes could grow in lockstep with the universe, a phenomenon that Croker and his team call cosmological coupling.

The most well-known example of cosmologically-coupled material is light itself, which loses energy as the universe grows. “We thought to consider the opposite effect,” said research co-author and UH Mānoa Physics and Astronomy Professor Duncan Farrah. “What would LIGO—Virgo observe if black holes were cosmologically coupled and gained energy without needing to consume other stars or gas?”

To investigate this hypothesis, the researchers simulated the birth, life, and death of millions of pairs of large stars. Any pairs where both stars died to form black holes were then linked to the size of the universe, starting at the time of their death. As the universe continued to grow, the masses of these black holes grew as they spiraled toward each other. The result was not only more massive black holes when they merged, but also many more mergers. When the researchers compared the LIGO—Virgo data to their predictions, they agreed reasonably well. “I have to say I didn’t know what to think at first,”‘ said research co-author and University of Michigan Professor Gregory Tarlé. “It was a such a simple idea, I was surprised it worked so well.”

According to the researchers, this new model is important because it doesn’t require any changes to our current understanding of stellar formation, evolution, or death. The agreement between the new model and our current data comes from simply acknowledging that realistic black holes don’t exist in a static universe. The researchers were careful to stress, however, that the mystery of LIGO—Virgo’s massive black holes is far from solved.

“Many aspects of merging black holes are not known in detail, such as the dominant formation environments and the intricate physical processes that persist throughout their lives,” said research co-author and NASA Hubble Fellow Dr. Michael Zevin. “While we used a simulated stellar population that reflects the data we currently have, there’s a lot of wiggle room. We can see that cosmological coupling is a useful idea, but we can’t yet measure the strength of this coupling.”

Research co-author and UH Mānoa Physics and Astronomy Professor Kurtis Nishimura expressed his optimism for future tests of this novel idea, “As gravitational-wave observatories continue to improve sensitivities over the next decade, the increased quantity and quality of data will enable new analysis techniques. This will be measured soon enough.”