Eddie Gonzales Jr. – MessageToEagle.com – The largest alpine lake system in the world sits atop the Qinghai-Tibet Plateau, commonly known as the Tibetan Plateau, which is the highest and largest plateau in the world. Researchers know the lakes influence the transfer of heat between the land and atmosphere, affecting regional temperatures and precipitation. But little is known about the physical properties and thermal dynamics of Tibetan lakes, especially during the winter months when the lakes are covered in ice. 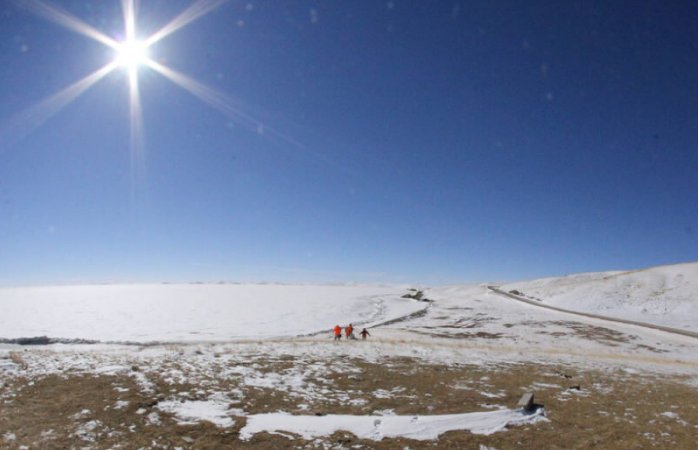 In a new study, Kirillin et al. looked at China’s Ngoring Lake—the largest freshwater lake (610 square kilometers) on the plateau—which is typically covered in ice from December through mid-April. The team moored temperature, pressure, and radiation loggers in one of the deepest parts of the lake in September 2015. They observed an anomalous warming trend after the lake surface froze over, as solar radiation at the surface warmed the upper water layers under the ice. Strong convective mixing left Ngoring Lake fully mixed down to its mean depth within a month of full ice cover.

In most ice-topped lakes, water temperatures typically remain below the maximum density temperature, but here the authors found that the water temperature was higher than the maximum freshwater density by the middle of the ice season, which accelerated the ice melt at the end of the winter season. As the ice broke up, water temperature dropped by nearly 1°C, releasing some 500 watts per square meter of heat into the atmosphere in just one or two days.

The study demonstrates that lakes do not lie dormant under ice. But the impacts extend beyond local lake effects; taken together, the thousands of lakes across the plateau could be heat flux hot spots after ice melt, releasing the heat absorbed from solar radiation and driving changes in temperatures, convection, and water mass flux with potential impacts at even global scales.