Eddie Gonzales Jr. – MessageToEagle.com – Geologists found a hot “river of rocks” being squeezed from the Pacific Ocean through a gateway under Central America and reaching the middle of the Caribbean Sea.

The team looked at minute changes in satellite-detected gravitational pull within the Caribbean and at mantle tomography images—similar to a CAT Scan—of the asthenosphere under the Caribbean, and found the layer is actually flowing vigorously, moving fast enough to drive plate motions. 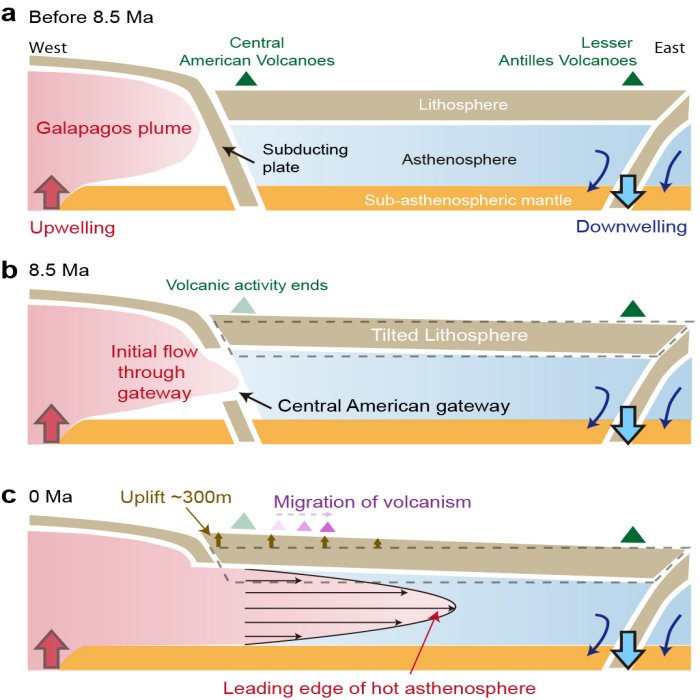 In this image, the warped amount of the surface is due to the opening of the Central American gateway that allowed hot material to flow through. (a) Before 8.5 million years ago, hot material was upwelling under the Galapagos from deep inside the Earth, but was blocked out of the Caribbean because of a curtain of subducting plate. (b) A gateway opened at 8.5 million years ago allowing the hot material to flow through. (c) Today, the hot material reaches midway between Central America and the Lesser Antilles, tilting up the bottom of the Caribbean sea by about 300 m (1,000 ft). Credit: University of Houston

This underground “river of rocks” started flowing eight million years ago, when the Central American gateway opened, uplifting the overlying seafloor by several hundred feet and tilting it to the northeast toward the Lesser Antilles.

“Without the extra support generated by this flow in the asthenosphere, portions of Central America would still be below sea level. The Atlantic and the Pacific Oceans would be connected without a need for the Panama Canal,” said study co-author Lorenzo Colli, assistant professor of geophysics, geodynamics and mantle structure in the Department of Earth and Atmospheric Sciences. 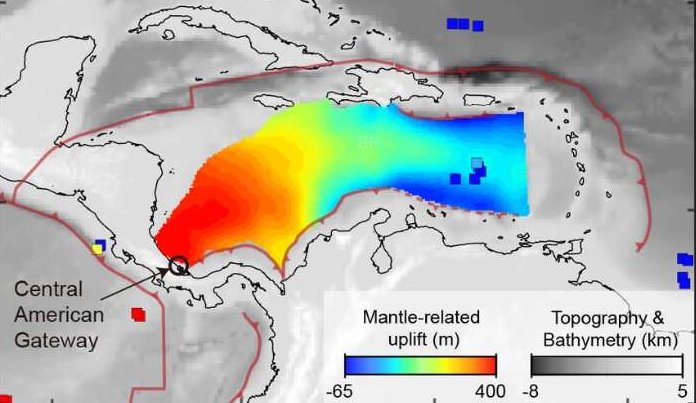 An image of the Earth’s warped surface of the Caribbean shows its tilted due to the east-flowing mantle underneath the Caribbean that pushes up the western Caribbean. Credit: University of Houston

The findings have implications for understanding the shape of the Earth’s surface, of its evolution over time through the appearance and disappearance of shallows seas, low-lying land bridges and the forces that move and cause earthquakes.

Another fascinating discovery, according to the researchers, is the asthenosphere is moving six inches per year, which is three times faster than an average plate. It can move independently from the overlying plates and drag them in a different direction.

“This challenges the top-down notion that subduction is always the driver,” explained Jonny Wu, study co-author and assistant professor of structural geology, tectonics and mantle structure.

“Think of the plates moving like an air hockey puck and being lubricated from below. Instead, what we found is the air hockey table is imposing its own currents on the puck that’s moving around, creating a bottom-up movement that has not been well recognized, and that’s being quantified here.”

Research is published in Nature Communications.