Eddie Gonzales Jr. – MessageToEagle.com – Clean energy is the leading solution for climate change. But solar and wind power are inconsistent at producing enough energy for a reliable power grid. Alternatively, lithium-ion batteries can store energy but are a limited resource.

“The advantage of a coal power plant is it’s very steady. If the power source fluctuates like it does with clean energy, it makes it more difficult to manage, so how can we use an energy storage device or system to smooth out these fluctuations?” said Nian Liu, an assistant professor at the Georgia Institute of Technology. in a press release. 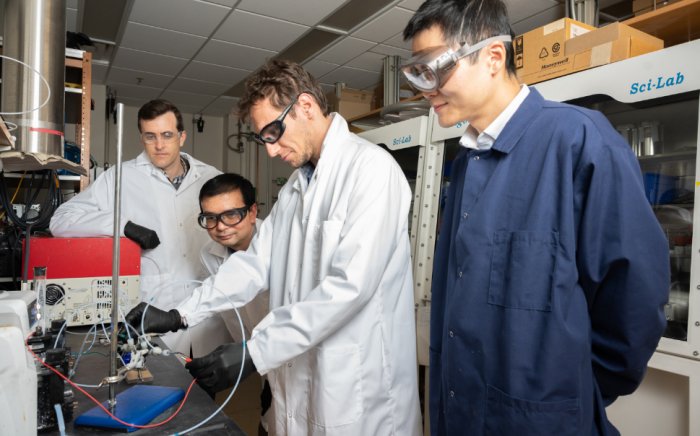 Flow batteries offer a solution. Electrolytes flow through electrochemical cells from storage tanks in this rechargeable battery. The existing flow battery technologies cost more than $200/kilowatt hour and are too expensive for practical application, but Liu’s lab in the School of Chemical and Biomolecular Engineering (ChBE) developed a more compact flow battery cell configuration that reduces the size of the cell by 75%, and correspondingly reduces the size and cost of the entire flow battery. The work could revolutionize how everything from major commercial buildings to residential homes are powered.

The all-Georgia Tech research team published their findings in the paper, “A Sub-Millimeter Bundled Microtubular Flow Battery Cell With Ultra-high Volumetric Power Density,” in Proceedings of the National Academy of Sciences.

Flow batteries get their name from the flow cell where electron exchange happens. Their conventional design, the planar cell, requires bulky flow distributors and gaskets, increasing size and cost but decreasing overall performance. The cell itself is also expensive. To reduce footprint and cost, the researchers focused on improving the flow cell’s volumetric power density (W/L-of-cell). 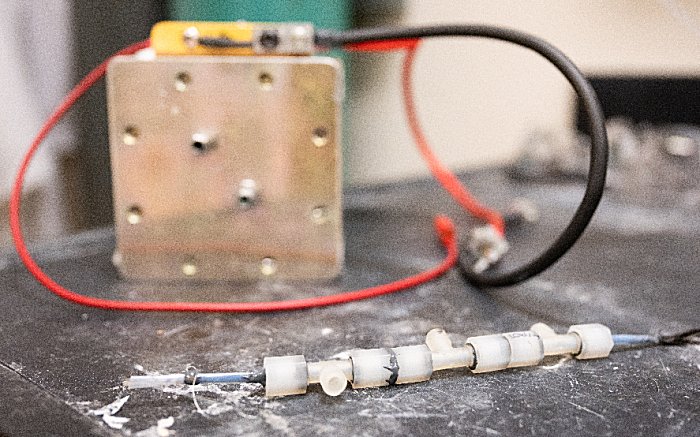 Liu’s lab in the School of Chemical and Biomolecular Engineering (ChBE) developed a more compact flow battery cell configuration that reduces the size of the cell by 75%, and correspondingly reduces the size and cost of the entire flow battery. Image credit: Georgia Tech

They turned to a configuration commonly used in chemical separation — sub-millimeter, bundled microtubular (SBMT) membrane — made of a fiber-shaped filter membrane known as a hollow fiber. This innovation has a space-saving design that can mitigate pressure across the membranes that ions pass through without needing additional support infrastructure.

“We were interested in the effect of the battery separator geometry on the performance of flow batteries,” said Ryan Lively, a professor in ChBE. “We were aware of the advantages that hollow fibers imparted on separation membranes and set out to realize those same advantages in the battery field.”

Applying this concept, the researchers developed an SMBT that reduces membrane-to-membrane distance by almost 100 times. The microtubular membrane in the design works as an electrolyte distributor at the same time without the need for large supporting materials. The bundled microtubes create a shorter distance between electrodes and membranes, increasing the volumetric power density. This bundling design is the key discovery for maximizing flow batteries’ potential.

To validate their new battery configuration, the researchers used four different chemistries: vanadium, zinc-bromide, quinone-bromide, and zinc-iodide. Although all chemistries are functional, two were most promising. Vanadium was the most mature chemistry, but also less accessible, and the reduced form of it is unstable in air. They found zinc iodide was the most energy-dense option, making it the most effective for residential units. Zinc-iodide offered many advantages even compared to lithium: It has less of a supply chain issue and also can be turned into zinc oxide and dissolve in acid, making it much easier to recycle.

This electrochemical solution for this unique shape of the flow battery proved more powerful than conventional planar cells.

“The superior performance of the SMBT was also demonstrated by finite element analysis,” said Xing Xie, an assistant professor in the School of Civil and Environmental Engineering. “This simulation method will also be applied in our future study for cell performance optimization and scaling up.”

With zinc-iodide chemistry, the battery could run for more than 220 hours, or to > 2,500 cycles at off-peak conditions. It could also potentially reduce the cost from $800 to less than $200 per kilowatt hour by using recycled electrolyte.

Building the Future of Energy

The researchers are already working on commercialization, focusing on developing batteries with different chemistries like vanadium and scaling up their size. Scaling will require coming up with an automated process to manufacture a hollow fiber module, which now is done manually, fiber by fiber. They eventually hope to deploy the battery in Georgia Tech’s 1.4-megawatt microgrid in Tech Square, a project that tests microgrid integration into the power grid and offers living laboratory for professors and students.

The SBMT cells could also be applied to different energy storage systems like electrolysis and fuel cells. The technology could even be strengthened with advanced materials and different chemistry in various applications.

“This innovation is very application driven,” Liu said. “We have the need to reach carbon neutrality by increasing the percentage of renewable energy in our energy generation, and right now, it’s less than 15% in the U.S. Our research could change this.”