Jan Bartek – AncientPages.com – The Etruscan civilization, which flourished during the Iron Age in central Italy, has intrigued scholars for millennia. With remarkable metallurgical skills and a now-extinct, non-Indo-European language, the Etruscans stood out from their contemporary neighbors, leading to intense debate from the likes of the ancient Greek historian Herodotus on their geographical origins. 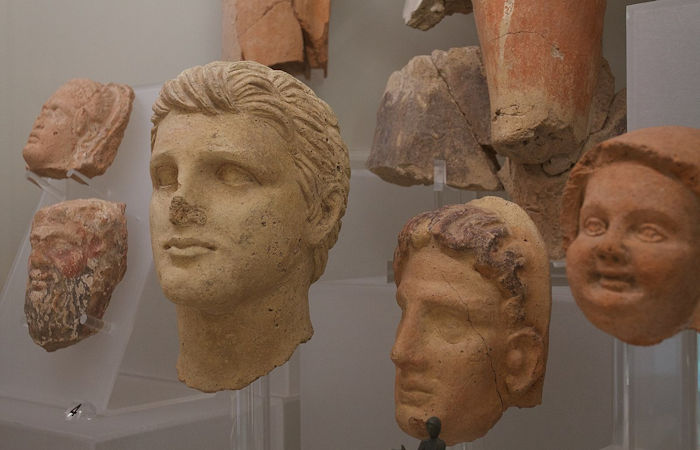 Now, a new study by a team of scholars from Germany, Italy, U.S., Denmark and the U.K., sheds light on the origin and legacy of the enigmatic Etruscans with genome-wide data from 82 ancient individuals from central and southern Italy, spanning 800 BCE to 1000 CE. Their results show that the Etruscans, despite their unique cultural expressions, were closely related to their italic neighbors, and reveal major genetic transformations associated with historical events.

With an extinct language that is only partly understood, much of what was initially known about Etruscan civilization comes from the commentary of later Greek and Roman writers. One hypothesis about their origins, the one favored by Herodotus, points to the influence of ancient Greek cultural elements to argue that the Etruscans descended from migrating Anatolian or Aegean groups. Another, championed by Dionysius of Halicarnassus, proposes that the Etruscans originated and developed locally from the Bronze Age Villanovan culture and were therefore an autochthonous population.

Although the current consensus among archaeologists supports a local origin for the Etruscans, a lack of ancient DNA from the region has made genetic investigations inconsistent. The current study, with a time transect of ancient genomic information spanning almost 2000 years collected from 12 archaeological sites, resolves lingering questions about Etruscan origins, showing no evidence for a recent population movement from Anatolia. In fact, the Etruscans shared the genetic profile of the Latins living in nearby Rome, with a large proportion of their genetic profiles coming from steppe-related ancestry that arrived in the region during the Bronze Age. 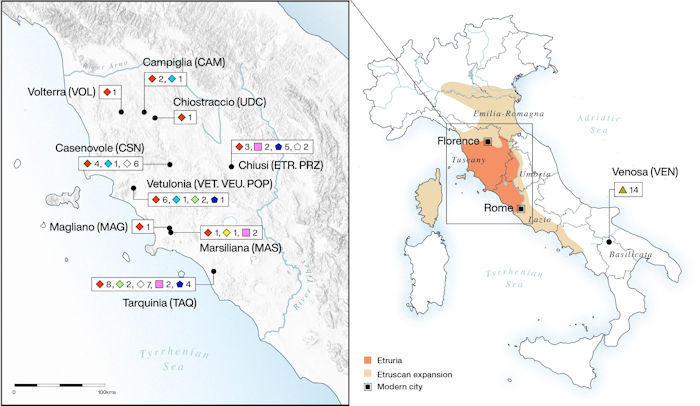 Geographic map of the Italian peninsula (right) including a zoom-in (left) indicating the maximum extension of Etruscan territories and the location and number of individuals for each archeological site newly analyzed in this study. Credit: Michelle O’Reilly, MPI SHH

Considering that steppe-related groups were likely responsible for the spread of Indo-European languages, now spoken around the world by billions of people, the persistence of a non-Indo-European Etruscan language is an intriguing and still unexplained phenomenon that will require further archaeological, historical, linguistic and genetic investigation.

“This linguistic persistence, combined with a genetic turnover, challenges simple assumptions that genes equal languages and suggests a more complex scenario that may have involved the assimilation of early Italic speakers by the Etruscan speech community, possibly during a prolonged period of admixture over the second millennium BCE,” says David Caramelli, Professor at the University of Florence.