Question:  What is unique about the Kuuk Thaayorre language?

Answer: Pormpuraaw is a small Aboriginal community on the western edge of Cape York, in northern Australia. The locals of Pormpuraaw speak a language called Kuuk Thaayorre. What is unique about Kuuk Thaayorre is that there are no words for left or right and time and space are intimately related in language, thought, and experience.

Instead of words like “right,” “left,” “forward,” and “back,” which, as commonly used in English to define space relative to an observer, the Kuuk Thaayorre, like many other Aboriginal groups, use cardinal-direction terms — north, south, east, and west to define space.

Have Scientists Found A “Universal Language” That Ties All Languages Together?

This is done at all scales, which means you have to say things like “There’s an ant on your southeast leg” or “Move the cup to the north northwest a little bit.” One obvious consequence of speaking such a language is that you have to stay oriented at all times, or else you cannot speak properly. The normal greeting in Kuuk Thaayorre is “Where are you going?” and the answer should be something like ” Southsoutheast, in the middle distance.” If you don’t know which way you’re facing, you can’t even get past “Hello.”

Though most Kuuk Thaayorre speakers prefer to use this language in the home and for social interaction, English is the language of most official institutions in the community such as the school, church, store, police station, cultural center, and council. 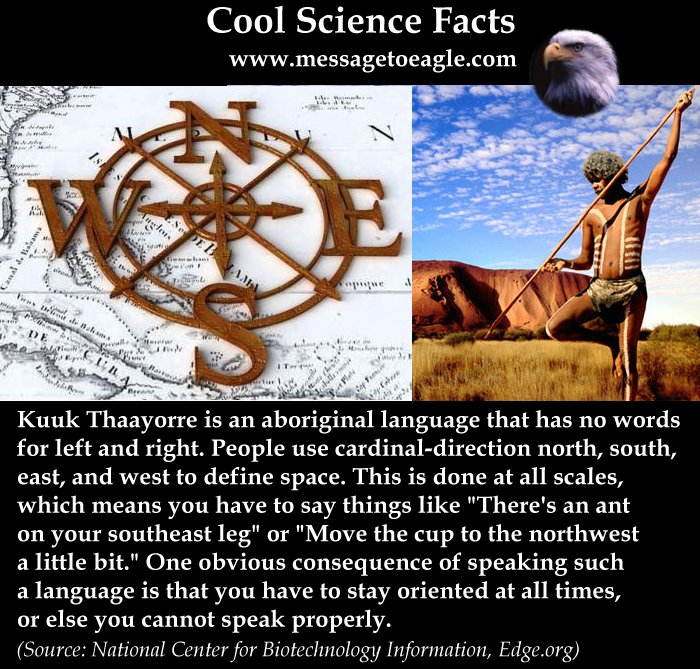