Eddie Gonzales Jr. – MessageToEagle.com – Forget about online games that promise you a “whole world” to explore. An international team of researchers has generated an entire virtual universe, and made it freely available on the cloud to everyone.

Uchuu (meaning “outer space” in Japanese) is the largest and most realistic simulation of the universe to date. The Uchuu simulation consists of 2.1 trillion particles in a computational cube an unprecedented 9.63 billion light-years to a side. For comparison, that’s about three-quarters the distance between Earth and the most distant observed galaxies. Uchuu reveals the evolution of the universe on a level of both size and detail inconceivable until now. 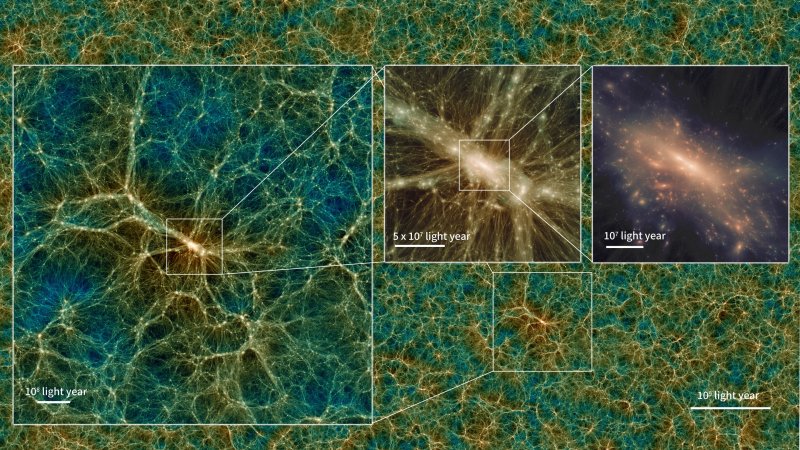 Figure 1: The distribution of dark matter in a snapshot from Uchuu. The images show the dark matter halo of the largest galaxy cluster formed in the simulation at different magnifications. Credit: Tomoaki Ishiyama

Uchuu focuses on the large-scale structure of the universe: mysterious halos of dark matter that control not only the formation of galaxies, but also the fate of the entire universe itself. The scale of these structures ranges from the largest galaxy clusters down to the smallest galaxies. Individual stars and planets aren’t resolved, so don’t expect to find any alien civilizations in Uchuu. But one way that Uchuu wins big in comparison to other virtual worlds is the time domain; Uchuu simulates the evolution of matter over almost the entire 13.8 billion year history of the universe from the Big Bang to the present. That is over 30 times longer than the time since animal life first crawled out of the seas on Earth.

Julia F. Ereza, a Ph.D. student at IAA-CSIC who uses Uchuu to study the large-scale structure of the universe explains the importance of the time domain, “Uchuu is like a time machine: we can go forward, backward and stop in time, we can ”zoom in” on a single galaxy or ”zoom out” to visualize a whole cluster, we can see what is really happening at every instant and in every place of the universe from its earliest days to the present, being an essential tool to study the cosmos.”

An international team of researchers from Japan, Spain, U.S.A., Argentina, Australia, Chile, France, and Italy created Uchuu using ATERUI II, the world’s most powerful supercomputer dedicated to astronomy. Even with all this power, it still took a year to produce Uchuu. Tomoaki Ishiyama, an associate professor at Chiba University who developed the code used to generate Uchuu, explains, “To produce Uchuu we have used … all 40,200 processors (CPU cores) available exclusively for 48 hours each month. Twenty million supercomputer hours were consumed, and 3 Petabytes of data were generated, the equivalent of 894,784,853 pictures from a 12-megapixel cell phone.”

An international team of researchers developed the largest and most detailed simulation of the Universe to date and has made it freely available on the cloud to everyone. This simulation, named Uchuu, will help astronomers to interpret results from Big Data galaxy surveys.

Before you start worrying about download time, the research team used high-performance computational techniques to compress information on the formation and evolution of dark matter haloes in the Uchuu simulation into a 100-terabyte catalog. This catalog is now available to everyone on the cloud in an easy to use format thanks to the computational infrastructure skun6 located at the Instituto de Astrofísica de Andalucía (IAA-CSIC), the RedIRIS group, and the Galician Supercomputing Center (CESGA). Future data releases will include catalogs of virtual galaxies and gravitational lensing maps.

Big Data science products from Uchuu will help astronomers learn how to interpret Big Data galaxy surveys expected in coming years from facilities like the Subaru Telescope and the ESA Euclid space mission.

These results appeared as Ishiyama et al. “The Uchuu simulations: Data Release 1 and dark matter halo concentrations” in the September 2021 issue of Monthly Notices of the Royal Astronomical Society.