Conny Waters – MessageToEagle.com – Archaeologists excavating in Berkshire, UK have discovered a long-lost Anglo-Saxon monastery that belonged to one of the most powerful women of the Early Middle Ages. It was most likely also her likely final resting place.

The location of the 8th-century monastery in the Berkshire village of Cookham, on the banks of the Thames, was a mystery until now, despite being well known from contemporary historical sources. Written records show it was placed under the rule of a royal abbess: Queen Cynethryth, the widow of the powerful King Offa of Mercia. 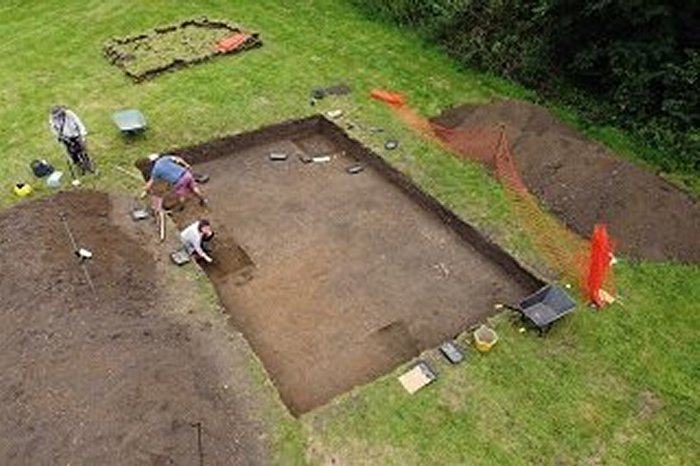 There is not much information and details of Offa’s reign or life. All it seems to mention is his death and how long he reigned. Mercia was the largest kingdom at that time and for a period of 80 years, it had only 2 kings, Ethelbert and Offa, both reigning for approx. 40 years each. King Offa of Mercia came to the throne through a civil war that started with the murder of his predecessor Ethelbert. Whether King Offa murdered King Ethelbert out of revenge r jealousy remains a historical mystery. However, history seems to agree that it was Offa’s wife, Queen Cynethryth, who became very jealous of her daughter’s happiness.  This jealousy led her to convince her husband to kill Ethelbert prior to the wedding.

The discovery of Queen Cynethryth’s monastery made by archaeologists at the University of Reading and local volunteers excavating in the grounds of Holy Trinity Church is a major archaeological and historical breakthrough.

The team uncovered the remains of timber buildings that would have housed the inhabitants of the monastery, alongside artifacts providing insights into their lives.

Dr. Gabor Thomas, the University of Reading archaeologist who is leading the excavation, said: “The lost monastery of Cookham has puzzled historians, with a number of theories put forward for its location. We set out to solve this mystery once and for all.

“The evidence we have found confirms beyond doubt that the Anglo-Saxon monastery was located on a gravel island beside the River Thames now occupied by the present parish church.

“Despite its documented royal associations, barely anything is known about what life was like at this monastery, or others on this stretch of the Thames, due to a lack of archaeological evidence. The items that have been uncovered will allow us to piece together a detailed impression of how the monks and nuns who lived here ate, worked and dressed. This will shed new light on how Anglo-Saxon monasteries were organized and what life was like in them.”

A network of monasteries was established on sites along the route of the Thames to take advantage of what was one of the most important trading arteries in Anglo-Saxon England, enabling them to develop into wealthy economic centers. The stretch of the Thames in which Cookham falls formed a contested boundary between the kingdoms of Mercia and Wessex, so the monastery here had particular strategic and political importance. In spite of this historical background, the exact location of the monastery has been long debated.

The excavation, in August, sought to answer this question by investigating open spaces straddling the churchyard of Holy Trinity Church, which still stands today.

The team has discovered a wealth of evidence including food remains pottery vessels used for cooking and eating, and items of personal dress including a delicate bronze bracelet and a dress pin, probably worn by female members of the community.

Clear evidence has emerged for the layout of the monastery which was organized into a series of functional zones demarcated by ditched boundaries. One of these zones appears to have been used for housing and another for industrial activity indicated by a cluster of hearths probably used for metalworking.

Dr. Thomas added: “Cynethryth is a fascinating figure, a female leader who clearly had genuine status and influence in her lifetime. Not only were coins minted with her image, but it is known that when the powerful European leader Charlemagne wrote to his English counterparts, he wrote jointly to both King Offa and Queen Cynethryth, giving both equal status.

“We are thrilled to find physical evidence of the monastery she presided over, which is also very likely to be her final resting place.”

Cynethryth joined a religious order and became royal abbess of the monastery after the death of her husband, King Offa, in AD 796.

King Offa is considered by many historians to have been the most powerful Anglo-Saxon king before Alfred the Great. He is known for ordering the creation of the earth barrier on the border between England and Wales, known as Offa’s Dyke, which can still be seen today.

Cynethryth is the only Anglo-Saxon queen known to be depicted on a coin—a rarity anywhere in Western Europe during the period. She died sometime after AD 798.