MessagetoEagle.com – The lost labyrinth, full of hieroglyphs sculpted for eternity in its endless stone walls is believed to contain all knowledge of ancient Egypt.

What secrets does this legendary giant underground complex contain?

Could this be the most important discovery in human history?

The Labyrinth of Egypt has been described by a number of ancient writers such as Herodotus, Strabo, Diodorus, and Pliny. The labyrinth’s age and ancient origins are unclear, but at the time of Herodotus’ visit it was more than 1,300 years old. 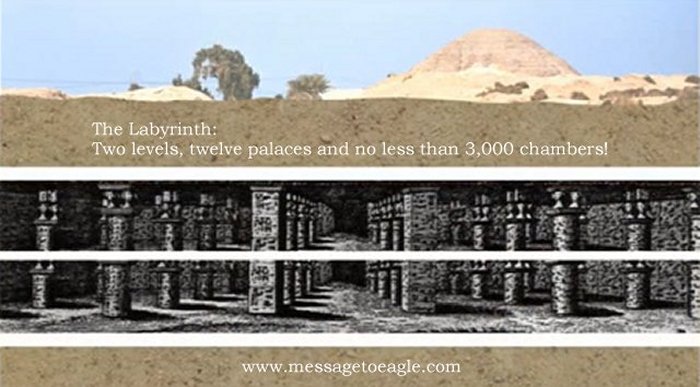 This legendary complex, named the “Labyrinth” by the ancient Greeks was legendary complex is believed to be an enormous collective tomb of the twelve kings who built it and a resting place for sacred crocodiles. Located at Hawara, about 90 km south of modern Cairo the complex contains secret chambers, passages shrines and tombs.

Herodotus wrote of the Labyrinth in the fifth century B.C. (History, 2.148-49): ‘It has twelve covered courts – six in a row facing north, six south – the gates of the one range exactly fronting the gates of the other.

Inside, the building is of two storeys and contains three thousand rooms, of which half are underground, and the other half directly above them.

I was taken through the rooms in the upper storey, so what I shall say of them is from my own observation, but the underground ones I can speak of only from report, because the Egyptians in charge refused to let me see them, as they contain the tombs of the kings who built the labyrinth, and also the tombs of the sacred crocodiles.

The upper rooms, on the contrary, I did actually see, and it is hard to believe that they are the work of men; the baffling and intricate passages from room to room and from court to court were an endless wonder to me, as we passed from a courtyard into rooms, from rooms into galleries, from galleries into more rooms and thence into yet more courtyards.

The roof of every chamber, courtyard, and gallery is, like the walls, of stone.

The walls are covered with carved figures, and each court is exquisitely built of white marble and surrounded by a colonnade’.

For a long time, the true location of the Labyrinth remained unknown.

Since Herodotus visited the legendary labyrinth of Egypt 2500 years ago, the building disappeared in the mist of time.

In 1888, Professor Flinders Petrie located the actual site of the Egyptian Labyrinth. Sufficient of the original foundations remained to enable the size and orientation of the building to be roughly determined. The Labyrinth was about 304 meters [997 feet] long and 244 meters [800 feet] wide. On other words, it was large enough to hold the great temples of Karnak and Luxor! 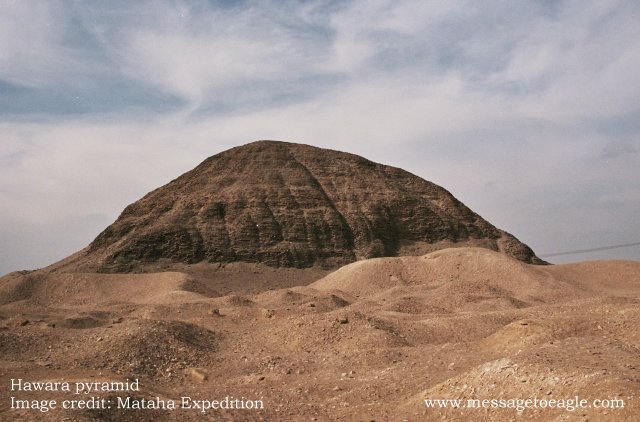 In his writings, Herodotus described nearby pyramid to be at the corner of the labyrinth. This was the Hawara pyramid. Could this offer a clue to the location of the Labyrinth?

When the Mataha Expedition scanned parts of the base area at Hawara in 2008 they found strong suggestion of complex chambers and walls several metres thick beneath the surface to considerable depth.

The findings of the research team confirmed that there were archeological features to the south of the Hawara pyramid of Amenemhat III. The scannings showed vertical walls of an average thickness of several meters, which were connected to form quite a number of closed rooms.

The scanned surfaces were at the Labyrinth area south of the pyramid. One area was 150m by 100m on the right side of the Bahr Wahbi and on the left side 80m by 100m.

Therefore, the team had proven the Labyrinth existed given the huge dimensions, but the total size and shape could not yet be concluded. The underground water and the presence of the canal had an effect on the consistency of the survey.

The researchers first encountered walls and structures 1.5m by 2.5m underground. There was nothing left other than walls and houses of mud bricks. This layer was believed to date back to Roman and Ptolemaic periods. Then, the Labyrinth region was used as a burial ground. It was during the Byzantium period that it had begun being used for housing. Under this layer, there rests the gigantic stone block Petrie had ascertained. The scientists scanned beneath the block and what they found further proved their theories.

There were rooms underneath. What Petrie had called the basin was in fact the ceiling!

The Mataha Expedition had made one of history’s greatest discoveries without even excavating. There lay underground the legendary Labyrinth of Egypt.

Unfortunately, this amazing discovery was never heard of because the Egyptian government opposed the outside world should learn about the findings.

The Mataha Expedition results were published in the fall 2008 scientific journal of the NRIAG and the results were exchanged on the public lecture at Ghent University. Shortly thereafter, Secretary General of the Supreme Council of Antiquities (Egypt) asked for a stop to communicating the results owing to the Egyptian National Security sanctions. The researchers waited patiently for Dr. Hawass to make the findings public.

It never happened. So, the team set up a website and posted their findings.

The Mataha Expedition’s discovery is extraordinary but no further attempts have been made to investigate the Labyrint. It is vital that the Labyrinth will once again be brought to daylight and presented to humanity.

For how many years will the Labyrinth and all its secrets be forgotten this time?