MessageToEagle.com – There’s no lack of ice in our solar system. Frozen water can be found almost everywhere: the poles of Mercury, Earth, the moon and Mars; the rings and icy satellites of the outer planets; and in comets that come whizzing past.

Winter in our Solar system is not as we know it on our planet. It can be dark and cold, but it’s nothing compared with the minus 280 degrees Fahrenheit temperatures on Mercury, the 21-year-long winter on Uranus, or the methane snow on Saturn’s moon Titan.

The reason for the seasons on Earth is primarily the tilt of the planet’s axis. 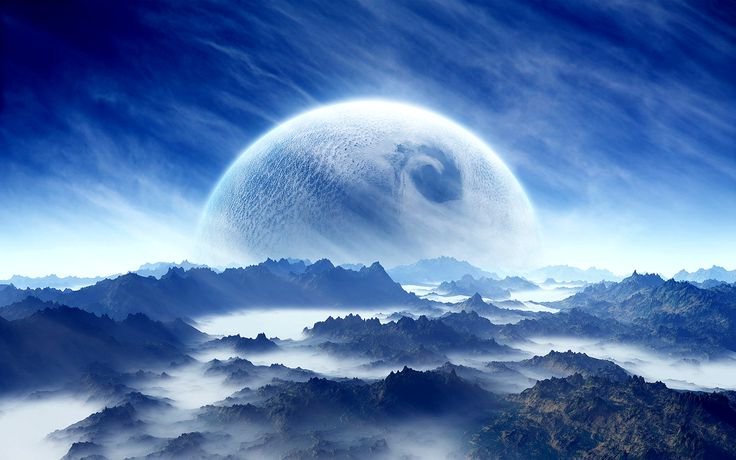 The Earth’s stable axial tilt of about 23.4 degrees means that it’s predictably warm in the summer and cold in the winter. Earth’s tilt varies very little – by plus or minus one degree over a 41,000 year period (!) and it keeps our climate relatively constant over long periods, allowing liquid water to flow and complex life to develop.

But without the stabilizing gravitational tugs from our large moon, our axialt tilt could vary much more dramatically. So – were it not for our moon, there might not be winter as we know it, or summer, or oceans, or possibly even life! Other places in our solar system have totally different weather conditions.

Europa, one of the four largest moons of Jupiter is a little smaller than Earth’s Moon. But it’s covered in ice—smooth ice! It’s gravity is only about 1/8th of Earth’s, so imagine the height you could get on a triple axel! Unfortunately, with Europa temperatures around -328° F, you would be frozen hard as a rock in a nanosecond!

As the closest planet to the Sun, Mercury must be very hot, right? It is!

The average temperature is well over 300 degrees Fahrenheit (about 149 degrees Celsius) and noontime highs can top 800 F (427 C).

So how can there possibly be ice on Mercury?

The planet has very little tilt, so in Mercury’s polar regions, the sun only appears low on the horizon, never high overhead. This means that the floors of deep craters near the poles can be constantly in the dark. These permanently shadowed cold traps may never get warmer than minus 280 degrees Fahrenheit (minus 173 degrees Celsius) — yes, that’s minus! — cold enough for ice to stick around for billions of years.

Mars – The Sky Is Falling

So the Martian sky is literally falling!

Although it is 28 miles (45 kilometers) wide, countless layers of ice and dust have all but buried Udzha Crater. Udzha lies near the edge of Mars’ northern polar cap, and only the topmost edges of its crater rim rise above the polar deposits to hint at its circular shape.

Saturn’s fifth largest moon, Tethys, is perhaps the largest chunk of ice (about 659 miles, or 1,060 kilometers, in diameter) with the least amount of rock (about 3 percent). Now all you need is a planet flowing with flavored syrup, and it’s snow cone time! The Tethyan average temperature is -305 degrees Fahrenheit (-187 degrees Celsius).

If the rains on Titan’s plains are mainly made of methane, what about elsewhere? Methane snow, of course!

Saturn’s moon Titan is the only place other than Earth known to have liquid flowing on its surface.

The difference is that while Earth’s surface liquid is water, Titan’s is probably liquid methane.

Scientists believe that methane, the primary component of natural gas here on Earth, flows freely as liquid on Titan’s surface and probably also precipitates out as snow on Titan’s mountain tops.

Uranus – Will Winter Ever End?

If you think winter nights are long in the Arctic, where the sun doesn’t rise for several months, imagine how you’d feel if you lived on the seventh planet from our sun: Uranus.

Compared with other planets, Uranus is laying on its side, probably knocked over by a giant impact early in our solar system’s history. This large tilt, by 82° causes 20-year-long seasons and unusual weather, although one thing that is for certain is that it is always cold.

For nearly a quarter of the Uranian year (equal to 84 Earth years), the Sun shines directly over each pole, leaving the other half of the planet plunged into a long, dark winter. The Uranian ‘Arctic’ is in complete darkness for almost the entire time!

Triton has a surface temperature of -235 °C (-390 °F) and is considered the coldest place in our solar system. It is so cold that most of Triton’s nitrogen is condensed as frost.

About the same size and density as Pluto, Triton, one of Neptune’s eight moons, is 30 times as far from the sun as the Earth. It is very cold and windy, with winds close to the speed of sound, and has a mixed terrain of icy regions and bare spots. Triton is a bit smaller than our moon, but its gravity is able to keep an atmosphere from completely escaping because it is so cold.

Recenly, a Massachusetts Institute of Technology researcher reported that observations obtained by NASA’s Hubble Space Telescope and ground-based instruments reveal that Triton, seems to have heated up significantly since the Voyager space probe visited it in 1989. The warming trend is causing part of Triton’s surface of frozen nitrogen to turn into gas, thus making its thin atmosphere denser.

“At least since 1989, Triton has been undergoing a period of global warming. Percentage-wise, it’s a very large increase,” said Elliot, professor of Earth, Atmospheric and Planetary Sciences and director of the Wallace Astrophysical Observatory. The 5 percent increase on the absolute temperature scale from about minus-392 degrees Fahrenheit to about minus-389 degrees Fahrenheit would be like the Earth experiencing a jump of about 22 degrees Fahrenheit.