Eddie Gonzales Jr. – MessageToEagle.com – A decades-old mystery as to how Jupiter produces a spectacular burst of X-rays every few minutes is finally solved.

The X-rays are part of Jupiter’s aurora—bursts of visible and invisible light that occur when charged particles interact with the planet’s atmosphere. A similar phenomenon occurs on Earth, creating the northern lights, but Jupiter’s is much more powerful, releasing hundreds of gigawatts of energy, enough to briefly power all of human civilization.

For the first time, astronomers have seen the way Jupiter’s magnetic field is compressed, which heats the particles and directs them along the magnetic field lines down into the atmosphere of Jupiter, sparking the X-ray aurora. The connection was made by combining in-situ data from NASA’s Juno mission with X-ray observations from ESA’s XMM-Newton. Credit: ESA/NASA/Yao/Dunn

In a new study, published in Science Advances, researchers combined close-up observations of Jupiter’s environment by NASA’s satellite Juno, which is currently orbiting the planet, with simultaneous X-ray measurements from the European Space Agency’s XMM-Newton observatory (which is in Earth’s own orbit).

The research team, led by UCL and the Chinese Academy of Sciences, discovered that X-ray flares were triggered by periodic vibrations of Jupiter’s magnetic field lines. These vibrations create waves of plasma (ionized gas) that send heavy ion particles “surfing” along magnetic field lines until they smash into the planet’s atmosphere, releasing energy in the form of X-rays.

Co-lead author Dr. William Dunn (UCL Mullard Space Science Laboratory) said: “We have seen Jupiter producing X-ray aurora for four decades, but we didn’t know how this happened. We only knew they were produced when ions crashed into the planet’s atmosphere.

“Now we know these ions are transported by plasma waves—an explanation that has not been proposed before, even though a similar process produces Earth’s own aurora. It could, therefore, be a universal phenomenon, present across many different environments in space.”

X-ray auroras occur at Jupiter’s north and south poles, often with clockwork regularity—during this observation Jupiter was producing bursts of X-rays every 27 minutes. The charged ion particles that hit the atmosphere originate from volcanic gas pouring into space from giant volcanoes on Jupiter’s moon, Io.

This gas becomes ionized (its atoms are stripped free of electrons) due to collisions in Jupiter’s immediate environment, forming a donut of plasma that encircles the planet. 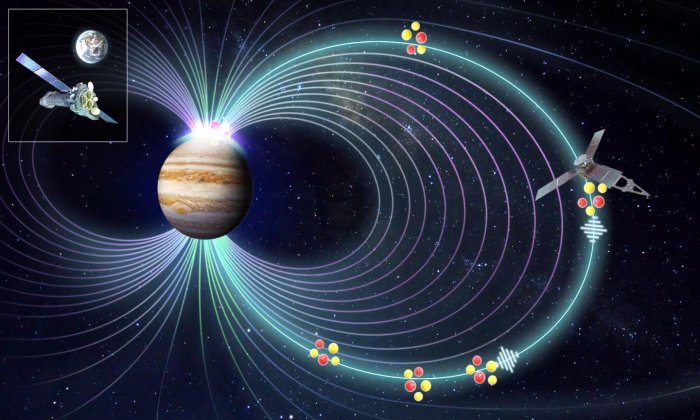 Jupiter’s mysterious X-ray auroras have been explained, ending a 40-year quest for an answer. For the first time, astronomers have seen the way Jupiter’s magnetic field is compressed, which heats the particles and directs them along the magnetic field lines down into the atmosphere of Jupiter, sparking the X-ray aurora. The connection was made by combining in-situ data from NASA’s Juno mission with X-ray observations from ESA’s XMM-Newton. Credit: ESA/NASA/Yao/Dunn

Co-lead author Dr. Zhonghua Yao (Chinese Academy of Sciences, Beijing) said: “Now we have identified this fundamental process, there is a wealth of possibilities for where it could be studied next. Similar processes likely occur around Saturn, Uranus, Neptune and probably exoplanets as well, with different kinds of charged particles ‘surfing’ the waves.”

“We can never visit black holes, as they are beyond space travel, but Jupiter is on our doorstep. With the arrival of the satellite Juno into Jupiter’s orbit, astronomers now have a fantastic opportunity to study an environment that produces X-rays up close.”

For the new study, researchers analyzed observations of Jupiter and its surrounding environment carried out continuously over a 26-hour period by the Juno and XMM-Newton satellites.

They found a clear correlation between waves in the plasma detected by Juno and X-ray auroral flares at Jupiter’s north pole recorded by X-MM Newton. They then used computer modeling to confirm that the waves would drive the heavy particles towards Jupiter’s atmosphere.

Why the magnetic field lines vibrate periodically is unclear, but the vibration may result from interactions with the solar wind or from high-speed plasma flows within Jupiter’s magnetosphere.

Jupiter’s magnetic field is extremely strong—about 20,000 times as strong as Earth’s—and therefore its magnetosphere, the area controlled by this magnetic field, is extremely large. If it was visible in the night sky, it would cover a region several times the size of our moon.