Quantum information relies on the possibility of writing messages in a quantum particle and reading them out in a reliable way. 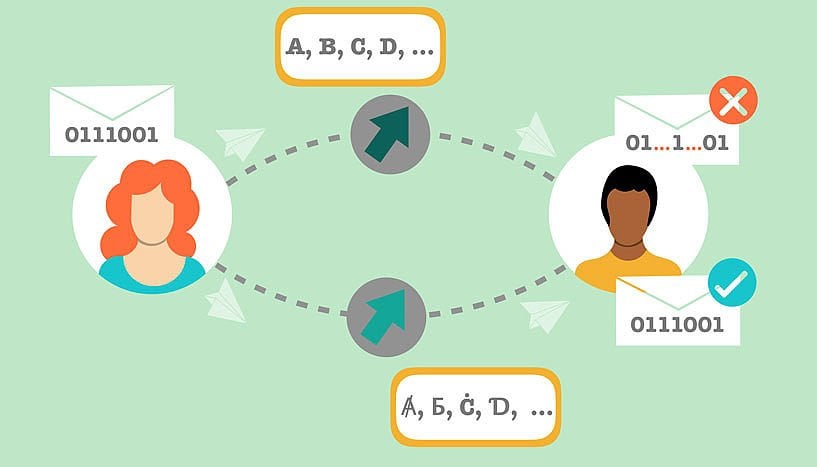 Anna writes a message to Bill using the spin of an electron which travels at velocities close to the speed of light. If Anna and Bill use the usual procedure for reading the spin (pictured as the standard Latin alphabet) Bill is unable to decode the message, and the communication fails. If they use a new definition of the spin of the electron (pictured as the modified alphabet) the message is read out correctly, and they are able to use the electron to communicate (© Flaminia Giacomini).

If, however, the particle is relativistic, meaning that it moves with velocities close to the speed of light, it is impossible for standard techniques to unambiguously decode the message and the communication fails.

Let us imagine the following situation: Anna and Bill want to communicate exchanging a message by using a property of a quantum particle, say the spin of an electron, which is an intrinsic form of particle’s rotation. Bill needs Anna’s message as quickly as possible, so Anna has to send the electron at maximum speed, very close to the speed of light. Given that Anna has the electron in her laboratory localized, one of the fundamentals of quantum physics, the Heisenberg uncertainty principle, forbids the velocity of the electron to be defined with arbitrary precision.

A New Method That Can Help Measure Quantum Entanglement – Developed

Breakthrough In Quantum Computing Will Help To Improve Computer Memory

When the electron travels extremely fast, that means, relativistically, the interplay between special relativity and quantum physics causes the spin and the velocity of the electron to get entangled. Due to this correlation, which is stronger than what is classically possible, Bill is not able to read out the spin with the standard method. Can Anna and Bill improve their communication strategy?

Researchers at the University of Vienna and the Austrian Academy of Sciences have introduced a novel alternative to the standard alphabet used by Anna and Bill.

Their technique guarantees that the message, written by Anna and read by Bill, can be decoded unambiguously even when the particle behaves according to both quantum mechanics, because of Heisenberg’s uncertainty principle, and special relativity, due to its very high velocity.

The novel method delivers a new definition of the spin of quantum particles that move very fast. Thus it modifies both the way Anna writes the message and the way Bill reads it. Key to this technique is a “translation” of the way the message would be written and read between the standard alphabet, used when the electron is at rest, and the new alphabet, used when the electron travels very fast.

“These results are indicative that this translation procedure could open up to new applications in relativistic quantum information,” Flaminia Giacomini, the lead author of the paper, said in a press release.

For instance, this technique could be helpful in satellite-based quantum communication, where a particle carrying a message has to travel quickly between two far-away points.