Eddie Gonzales Jr. – MessageToEagle.com – Scientists have discovered a new kind of quantum order, and it’s certainly not what anyone expected. This new discovery challenges our understanding of physics.

Led by  Dr. Magdalena Zych, a team from the University of Queensland experimented bringing together elements of the two big, but contradictory physics theories developed in the past century.

“Our proposal sought to discover: what happens when an object massive enough to influence the flow of time is placed in a quantum state?” Dr. Zych said. 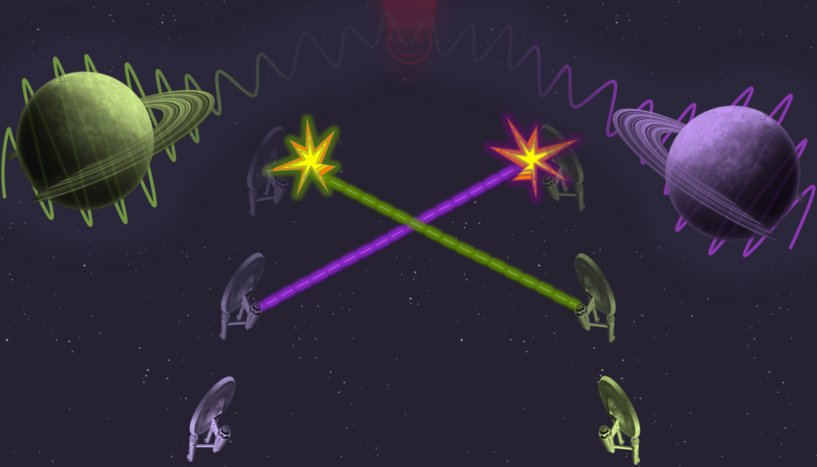 A pair of starships train for a mission. They are asked to fire at each other at a specified time, and immediately start their engines in order to dodge each other’s attack. If either of the ships fires too early, it will destroy the other, and this establishes an unmistakable time order between the firing events. If a powerful agent could place a sufficiently massive object, say a planet, closer to one ship it would slow down its counting of time. As a result, the ship farther away from the mass will fire too early for the first one to escape. © Magdalena Zych

She said Einstein’s theory described how the presence of a massive object slowed time.

“Imagine two space ships, asked to fire at each other at a specified time while dodging the other’s attack,” she said.

“If either fires too early, it will destroy the other.”

“In Einstein’s theory, a powerful enemy could use the principles of general relativity by placing a massive object — like a planet — closer to one ship to slow the passing of time.”

“Because of the time lag, the ship furthest away from the massive object will fire earlier, destroying the other.”

Dr. Zych said the second theory, of quantum mechanics, says any object can be in a state of “superposition”

“This means it can be found in different states — think Schrodinger’s cat,” she said.

Dr. Zych said using the theory of quantum mechanics if the enemy put the planet into a state of “quantum superposition,” then time also should be disrupted.

“There would be a new way for the order of events to unfold, with neither of the events being first or second — but in a genuine quantum state of being both first and second,” she said.

A New Method That Can Help Measure Quantum Entanglement – Developed

Breakthrough In Quantum Computing Will Help To Improve Computer Memory

UQ researcher Dr. Fabio Costa said although “a superposition of planets” as described in the paper — may never be possible, technology allowed a simulation of how time works in the quantum world — without using gravity.

“Even if the experiment can never be done, the study is relevant for future technologies,” Dr. Costa said.

“We are currently working towards quantum computers that — very simply speaking — could effectively jump through time to perform their operations much more efficiently than devices operating in fixed sequence in time, as we know it in our ‘normal’ world.”

Stevens Institute of Technology and the University of Vienna scientists were co-authors on Bell’s Theorem for Temporal Order, published in Nature Communications.