Eddie Gonzales Jr. – MessageToEagle.com – Fossils discovered in Scotland represent some of the world’s oldest salamanders, according to a new study led by UCL researchers.

The research team analyzed 166-million-year-old fossils of a type of animal called Marmorerpeton, found in Middle Jurassic rocks on the Isle of Skye. 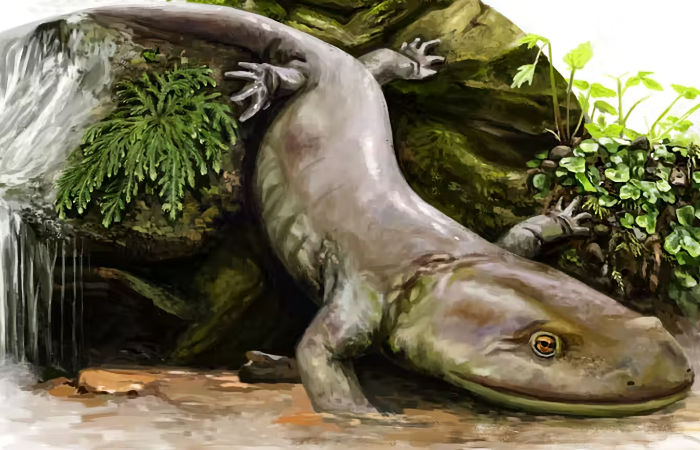 They found that it has several key salamander traits, but is not part of the modern group of salamanders. Their results are reported in Proceedings of the National Academy of Sciences (PNAS). The specimen is believed to be the oldest salamander fossil found in Europe.

Marmorerpeton was first described over 30 years ago, but only a few isolated fossil vertebrae and partial jaw bones were found, making it somewhat enigmatic. The new Scottish material adds a wealth of new data, and it also represents a new species: Marmorerpeton wakei, named after the late Professor David Wake, a leading American authority on salamander evolution.

Lead-author Dr. Marc Jones (UCL Cell & Developmental Biology) says that “the fossil is definitely a salamander but unlike anything alive today. It highlights the importance of the fossil record for preserving combinations of anatomical features that do not exist in any living animal.”

Salamanders, which include newts, are a type of amphibian. Unlike frogs they have a tail and are more variable in size and shape. There are over 700 species found across the northern hemisphere in various freshwater and woodland habitats. They are renowned for their ability to regrow limbs and organs.

This new Scottish fossil salamander had a wide, shallow frog-like head but powerful jaws and distinctive, prominent projections behind the eyes. The skull roof bones show that it was ornamented like that of a crocodile, setting it apart from modern salamanders. The limb bones and deep tail of Marmorerpeton wakei suggest this salamander was aquatic, perhaps using its wide jaws to catch prey by suction feeding, similar to the lifestyle seen in the modern hellbender of North America.

Commenting on the appearance of Marmorerpeton wakei, Dr. Jones says that “the big bony projections behind the eye were a bit unexpected but smaller projections do exist in fossil salamanders from slightly younger rocks. Their purpose remains unknown.”

Modern salamanders have been extensively studied to understand development, regeneration, and toxins. However, their early evolution is still very poorly understood. The study included a detailed survey of modern salamander anatomy which informed the subsequent analyses.

Many previous studies of fossil salamanders have relied heavily on fossils from the Late Jurassic period, found in Kazakhstan, belonging to the genus Karaurus. As new fossils are found that predate this—such as Marmorerpeton—they provide a more complete understanding of how early salamanders evolved.

Senior-author Professor Susan Evans (UCL Cell & Developmental Biology) who first described Marmorerpeton in 1988 says that “the origin and early history of modern amphibian groups remains mysterious and new fossils like this one are key to developing a better understanding of amphibian evolution.”

“In theory, the Skye salamander should give us a clue as to what the ancestors of modern salamanders looked like. However, it could be that they are a highly specialized off-shoot.”

Senior co-author Professor Roger Benson (University of Oxford) says that “the fossil site on Skye is proving to be a treasure trove for our understanding of the Middle Jurassic fauna and ecosystems, and is helping to fill gaps in the fossil record of many animal lineages including mammals, reptiles and amphibians.” 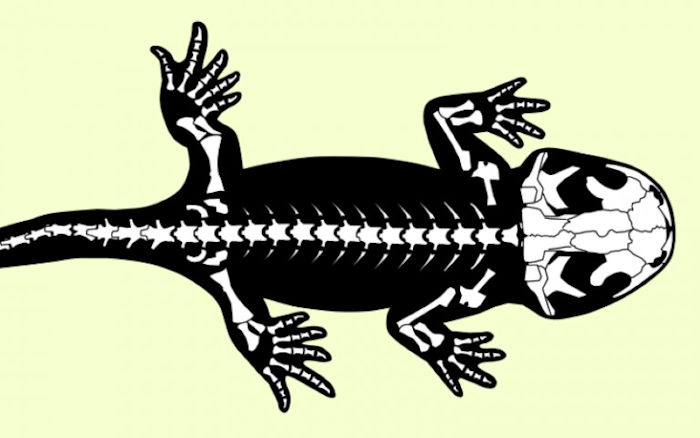 Dr. Jones added that “several fossil salamanders are known from the Jurassic and Cretaceous of China. These were thought to represent early members of modern groups, but our new analyses suggest they might not be part of specific groups as some of their characteristics are found more widely than previously thought.”

The details of the new Scottish fossils of Marmorerpeton wakei were only revealed thanks to microCT scanning, which was used to digitize the bones embedded within in the rock. This technology provides a powerful tool in revealing bones hidden for millions of years. One specimen, collected in 2016, was found to be part of a specimen collected in 1971 but left undescribed until now. The digital models are now freely available for others to examine or 3D print.