Eddie Gonzales Jr. – MessageToEagle.com – The laws of quantum mechanics allow for the existence of ‘quasi-particles’: excitations in materials that behave exactly like ordinary particles. A major advantage of quasi-particles over ordinary particles is that their properties can be engineered. In a Nature Materials News & Views article this week, IoP physicist Erik van Heumen describes recent experiments where even the interactions between quasi-particles can be tuned. 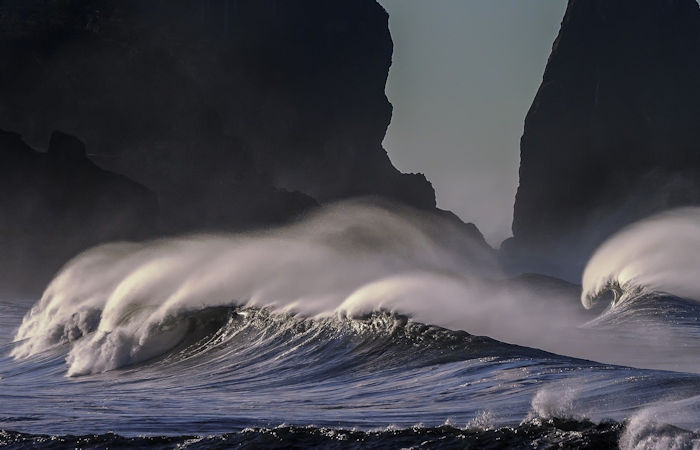 Water waves are localized excitations in the water, that in many aspects behave like particles, having velocities and energy, interacting, and so on. In materials, certain excitations can behave even more like particles, with all sorts of tunable properties: quasi-particles. Credit: Public Domain

In recent years, the mathematical branch of topology, studying the shapes of things, and the physical branch of condensed matter physics, studying the behaviour of solids and fluids, have merged into an exciting new research field: that of topological materials. One of the most exciting aspects of this combined field is the emergence of exotic quasi-particles: local disturbances in materials that behave exactly like particles. That such quasi-particles can exist, was already known from the quantum description of simple materials. What the combination with topology offers is a whole new set of such particles, known for example as Dirac and Weyl fermions, axions and magnetic monopoles.

Freeing themselves from the strict rules for ordinary particles dictated by nature, researchers gain control over the properties of quasi-particles by a careful choice of the materials used to generate them. One wish that has been high on the list has been to find materials in which the type and strength of interactions between quasi-particles can be tuned.

Recently, a family of materials was discovered that feature atoms arranged in a so-called kagome lattice. In his ‘News & Views’ article, Erik van Heumen describes experiments, reported on in the latest edition of Nature Materials, that suggest the formation in these materials of a so-called ‘flux-density wave’, an excitation that provides the first confirmation of the theoretical predictions that these materials could host exotically interacting quasi-particles. The fact that such tunable interactions between quasi-particles in materials can now be created in the laboratory holds great promise for future studies of topological materials.