Millisecond pulsars are neutron stars spinning up to 700 times per second. 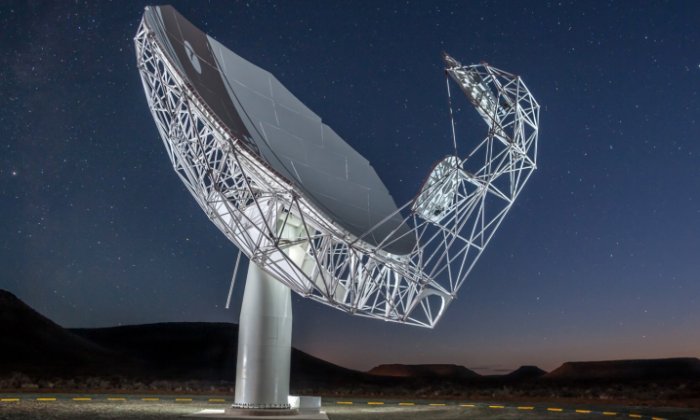 This is the first pulsar discovery using the MeerKAT antennas and it comes from the synergic work of two international collaborations, TRAPUM and MeerTIME, with the findings detailed in a Monthly Notices of the Royal Astronomical Society paper published today.

Millisecond pulsars are extremely compact stars mainly made up of neutrons, and are amongst the most extreme objects in the universe: they pack hundreds of thousands of times the mass of the Earth is a sphere with a diameter of about 24 km; and spin at a rate of hundreds of rotations per second. They emit a beam of radio waves that are detected by the observer at every rotation, like a lighthouse. The formation of these objects is highly enhanced in the star-rich environments at the centers of globular clusters.

“It is really exciting to see the potential for finding a large number of new millisecond pulsars in Globular Clusters using the excellent MeerKAT telescope,” says Professor Ben Stappers, from The University of Manchester and co-PI of the TRAPUM project. “It is also a preview of what will be possible with the Square Kilometre Array telescope for which MeerKAT is one of the precursors.”

Lead author, Alessandro Ridolfi, a post-doctoral research fellow at INAF and MPIfR said: “We directed the MeerKAT antennas toward 9 globular clusters, and we discovered new pulsars in 6 of them!” Five of these new pulsars orbit around another star, and one of these, named PSR J1823-3021G, is particularly interesting: “Because of its highly elliptical orbit, and massive companion, this system is likely the result of an exchange of partners: following a ‘close encounter’: the original partner was expelled and replaced by a new companion star”, continues Ridolfi.

“This particular pulsar could have a high mass, more than 2 times the mass of the Sun, or it could be the first confirmed system formed by a millisecond pulsar and a neutron star,” Tasha Gautam, doctoral researcher at the MPIfR in Bonn and co-author of the paper, explains.

“If confirmed by current additional observations, this would make this millisecond pulsar a formidable laboratory for studying fundamental physics“.

The 8 new pulsars are just the tip of the iceberg: the observations that led to their discovery used only about 40 of the MeerKAT 64 antennas and focused only on the central regions of the globular clusters.