Eddie Gonzales Jr. – MessageToEagle.com – The first image of the supermassive black hole at the center of our Milky Way galaxy brings radio astronomy back to its celestial birthplace.

The Event Horizon Telescope (EHT), a worldwide collection of millimeter-wave radio telescopes, made the new, landmark image of the same region from which came the first cosmic radio waves ever detected. 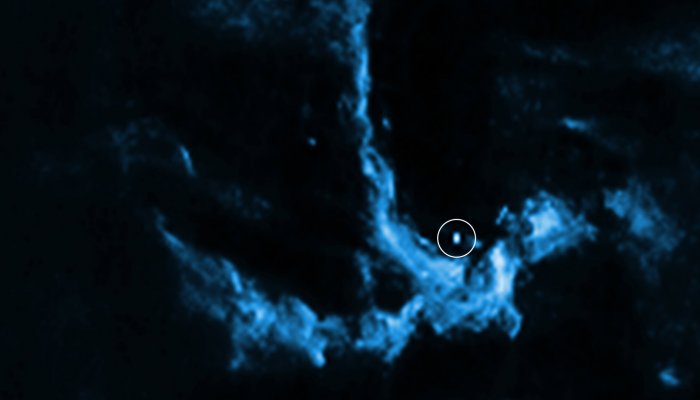 A Very Large Array image of the Milky Way’s central region. The bright spot marked by the circle is Sagittarius A*, where our galaxy’s central black hole is located. Credit: NRAO/AUI/NSF

That detection, by Bell Telephone Laboratories engineer Karl Jansky in 1932, was the beginning of radio astronomy.

The new EHT image is the culmination of a long history of Milky Way research starting with Galileo Galilei, who used his telescope in 1610 to discover that our galaxy, which appears like clouds to the naked eye, actually is composed of stars. In 1785, British astronomer William Herschel produced a rudimentary map of the Milky Way.

In 1918, American astronomer Harlow Shapley located the Milky Way’s center by using the newly discovered distance-measuring tool provided by Cepheid variable stars to determine that a halo of globular star clusters that surrounds the Milky Way is centered on a region in the constellation Sagittarius. That region is obscured from visible-light telescopes by thick clouds of gas and dust.

Jansky was hired by Bell Laboratories in 1928 and given the task of determining the sources of noise that interfered with short-wave radio telephone communications. He designed a highly directional antenna and by 1932 had identified a number of noise sources. However, one mystery remained—”a very steady hiss type static the origin of which is not known.”

The time of day when this hiss appeared changed with the seasons. At the suggestion of an astronomer friend, Jansky consulted some astronomy textbooks and in December of 1932 concluded that the strange hiss is coming “from outside the solar system.” He announced this in a paper he presented at a Washington, D.C., meeting in April of 1933. His announcement was reported on the front page of the New York Times on May 5, 1933.

Ten days later, Jansky was interviewed on a nationwide radio network and said he had located the position in the sky of the noise he had found, and “that seems to confirm Dr. Shapley’s calculation that the radio waves seem to come from the center of gravity of our galaxy.”

That region later would be called Sagittarius A, as the brightest source of radio emission in that constellation. In 1951, Australian radio astronomers further narrowed down the emission’s origin as the galaxy’s center.

In 1974, Bruce Balick and Robert Brown used the National Radio Astronomy Observatory’s Green Bank Interferometer to discover a very bright and compact object to which Brown later attached the name Sagittarius A* (adding the asterisk). A black hole became the leading explanation for what powers the bright radio emission of the object, abbreviated Sgr A*. In 1994, infrared and submillimeter studies estimated the object’s mass at 3 million times that of the Sun.

In 2002, a team led by Reinhard Genzel of the Max Planck Institute for Extraterrestrial Physics reported on a 10-year study of the orbital motion of a star called S2 near Sgr A*. That study concluded that the central object is more than 4 million times more massive than the Sun.

In 2009, another team reported on further observations of stellar orbits in the region and concluded that the central object probably is a black hole because no other phenomenon is known that can pack that much mass into such a small space. This work and other studies of Sgr A* earned the 2020 Nobel Prize in Physics for Genzel and Andrea Ghez of UCLA for producing “the most convincing evidence yet of a supermassive black hole at the center of the Milky Way.”

The EHT Collaboration’s production of an image consistent with the theoretical predictions of what should be seen around a black hole makes the case even more convincing today.