Saturn is unique among planets observed to date in that some of its aurorae are generated by swirling winds within its own atmosphere, and not just from the planet’s surrounding magnetosphere.

At all other observed planets, including Earth, aurorae are only formed by powerful currents that flow into the planet’s atmosphere from the surrounding magnetosphere. These are driven by either interaction with charged particles from the Sun (as at the Earth) or volcanic material erupted from a moon orbiting the planet (as at Jupiter and Saturn). 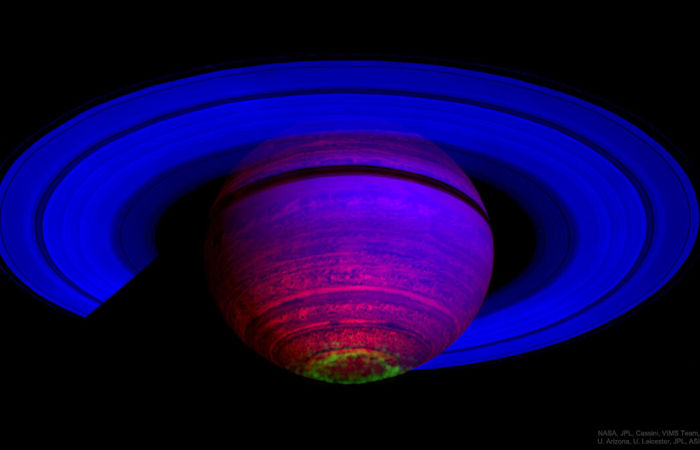 This discovery changes scientists’ understanding of planetary aurorae and answers one of the first mysteries raised by NASA’s Cassini probe, which reached Saturn in 2004: why can’t we easily measure the length of a day on the Ringed Planet?

When it first arrived at Saturn, Cassini tried to measure the bulk rotation rate of the planet, which determines the length of its day, by tracking radio emission ‘pulses’ from Saturn’s atmosphere. To the great surprise of those making the measurements, they found that the rate appeared to have changed over the two decades since the last spacecraft to have flown past the planet—Voyager 2, also operated by NASA—in 1981.

Leicester Ph.D. researcher Nahid Chowdhury is a member of the Planetary Science Group within the School of Physics and Astronomy and the corresponding author for the study, published in Geophysical Research Letters. He said:

“Saturn’s internal rotation rate has to be constant, but for decades researchers have shown numerous periodic properties related to the planet—the very measurements we’ve used at other planets to understand the internal rotation rate, such as the radio emission—tend to change with time. What’s more, there are also independent periodic features seen in the northern and southern hemispheres which themselves vary over the course of a season on the planet.

“Our understanding of the physics of planetary interiors tells us the true rotation rate of the planet can’t change this quickly, so something unique and strange must be happening at Saturn. Several theories have been touted since the advent of the NASA Cassini mission trying to explain the mechanism/s behind these observed periodicities. This study represents the first detection of the fundamental driver, situated in the upper atmosphere of the planet, which goes on to generate both the observed planetary periodicities and aurorae.

“It’s absolutely thrilling to be able to provide an answer to one of the longest standing questions in our field. This is likely to initiate some rethinking about how local atmospheric weather effects on a planet impact the creation of aurorae, not just in our own Solar System but farther afield too.”

Astronomers and planetary scientists based at the University of Leicester led a study alongside colleagues from NASA’s Jet Propulsion Laboratory (JPL), the Japan Aerospace Exploration Agency (JAXA), and the Universities of Wisconsin-Madison, Boston, and Lancaster, plus Imperial and University Colleges, London, to resolve the decades-old question.

They measured infrared emissions from the gas giant’s upper atmosphere using the Keck Observatory in Hawai’i and mapped the varying flows of Saturn’s ionosphere, far below the magnetosphere, over the course of a month in 2017.

This map, when fixed against the known pulse of Saturn’s radio aurorae, showed that a significant proportion of the planet’s aurorae are generated by the swirling pattern of weather in its atmosphere and are responsible for the planet’s observed variable rate of rotation.

Researchers believe the system is driven by energy from Saturn’s thermosphere, with winds in the ionosphere observed between 0.3 and 3.0 kilometres per second.

“The University of Leicester has long been involved in measuring the effects of this new discovery—we’ve observed how the pulsing aurorae and the wobbling magnetic field lines stretching out into space highlight an apparently changing rotation rate. For two decades our researchers, along with the wider scientific community, have speculated about what might be driving these strange periodicities.

“Over the years, scientific meetings have had late-night discussions about whether the volcanic moon Enceladus might be the cause, or interactions with the thick atmosphere of the moon Titan, or perhaps interactions with Saturn’s bright rings. But recently, many researchers have focused on the possibility that it is Saturn’s upper atmosphere that causes this variability.

“This search for a new type of aurora harks back to some of the earliest theories about Earth’s aurora. We now know that aurorae on Earth are powered by interactions with the stream of charged particles driven from the Sun. But I love that the name Aurora Borealis originates from the ‘the Dawn of the Northern Wind’. These observations have revealed that Saturn has a true Aurora Borealis—the first ever aurora driven by the winds in the atmosphere of a planet.”

Dr. Kevin Baines, a JPL-Caltech-based co-author of the study and a member of the Cassini Science Team, added:

“Our study, by conclusively determining the origin of the mysterious variability in radio pulses, eliminates much of the confusion into Saturn’s bulk rotation rate and the length of the day on Saturn.”

Because of the variable rotation rates observed at Saturn, scientists have been prevented from using the regular pulse of radio emission to calculate the bulk internal rotation rate. Fortunately, a novel method was developed by Cassini scientists using gravity-induced perturbations in Saturn’s complex ring system, which now seems to be the most accurate means of measuring the planet’s bulk rotational period, which was determined in 2019 to be 10 hours, 33 minutes and 38 seconds.

Planetary research at the University of Leicester spans the breadth of our Solar System—and beyond.

Leicester researchers are members of the Juno mission made up of a global team of astronomers observing Saturn’s massive neighbor, Jupiter, and are leading observations of the Solar System’s outer planets from the recently-launched James Webb Space Telescope. Leicester also plays a leading role in science and instrumentation on the European Space Agency (ESA)’s Jupiter Icy Moons Explorer (JUICE), due for launch later in 2022.