MessageToEagle.com – Looking at the dry and cold Red Planet today it can be difficult to imagine Mars was once very similar to Earth. But it’s true.

About 4 billion years ago, Mars had a different composition and had an atmosphere thick enough to maintain an ocean of liquid water. 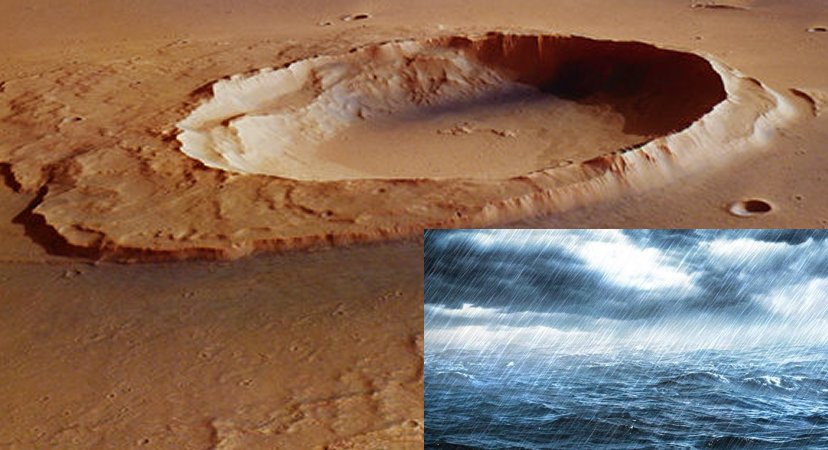 Scientists from ESA have found evidence of a great flood on Mars. In fact, the Red Planet experienced great flooding on several occasions. The conclusion was reached after ESA’s Mars Express captured images of one of the largest outflow channel networks on the Red Planet.

The Kasei Valles channel system extends around 3000 km from its source region in Echus Chasma – which lies east of the bulging volcanic region Tharsis and just north of the Valles Marineris canyon system – to its sink in the vast plains of Chryse Planitia.

Researchers now say that a combination of volcanism, tectonics, collapse and subsidence in the Tharsis region led to several massive groundwater releases from Echus Chasma, which subsequently flooded the Kasei Valles region around 3.6–3.4 billion years ago.

These ancient mega-floods have left their mark on the features seen today.

The Worcester Crater, a 25 km-wide impact crater has done its best to stand up to the erosive forces of the mega-floods.

While much of the blanket of material surrounding the crater – which was originally thrown out from inside the crater during the impact – has been eroded, the section downstream of the flood has survived. Over time this has led to the overall appearance of a streamlined island, with its stepped topography downstream perhaps suggesting variations in water levels or different flood episodes.

Is There Genetic Ancestry Between Mars And Earth?

Is it possible that we are all Martians?

According to many planetary scientists, it’s conceivable that all life on Earth is descended from organisms that originated on Mars.
So, if there is life on Mars, Martian species may share genetic roots with life on Earth.

More than 3.5 billion years ago, a blitz of meteors ricocheted around the solar system, passing material between the two fledgling planets. This galactic game of ping pong may have left bits of Earth on Mars, and vice versa, creating a shared genetic ancestry between the two planets.

Are We All Aliens On Our Own Planet?

A more controversial theory, put forward by Dr Ellis Silver, leading environmentalist and ecologist suggests that humans evolved somewhere else in the galaxy.

Is There Genetic Ancestry Between Mars And Earth? – Maybe Someday We’ll Know The Truth

Dr. Silver thinks there are a number of reasons why humans do not come from Earth. According to him it’s more likely humans evolved on a planet with lower gravity. “Mankind is supposedly the most highly developed species on the planet, yet is surprisingly unsuited and ill-equipped for Earth’s environment: harmed by sunlight, a strong dislike for naturally occurring foods, ridiculously high rates of chronic disease, and more, “Dr. Silver said.

Whatever the truth may be, the fact remains that Mars was once a much different place. The Red Planet lost about 63,000 gigatons of atmosphere, which would allow a layer of water about 15 feet deep to exist on the planet’s surface.

Better knowledge of the the Red Planet’s escaping atmosphere could help scientists better understand exoplanets too.