Eddie Gonzales Jr. – MessageToEagle.com – Astronomers have discovered thousands of exoplanets—planets beyond our solar system—but few have been directly imaged, because they are extremely difficult to see with existing telescopes. A University of Hawaiʻi Institute for Astronomy (IfA) graduate student has beaten the odds and discovered a directly imaged exoplanet, and it’s the closest one to Earth ever found, at a distance of only 35 light years. 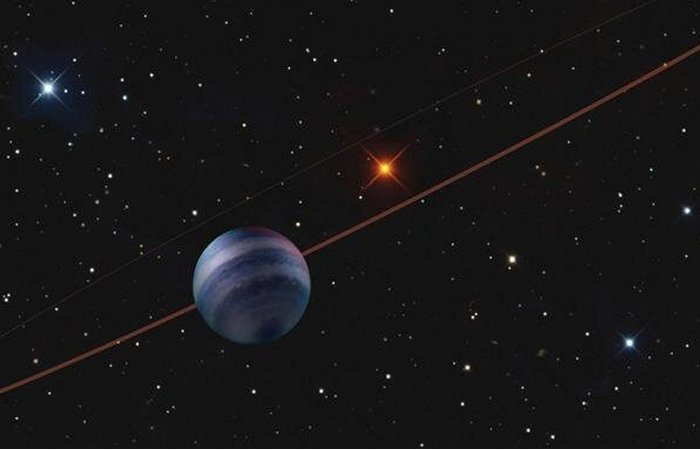 “With a massive planet on a super-wide-separation orbit, and with a very cool central star, COCONUTS-2 represents a very different planetary system than our own solar system,” Zhang explained. The COCONUTS survey has been the focus of his recently-completed Ph.D. thesis, aiming to find wide-separation companions around stars of all different types close to Earth.

COCONUTS-2b is the second-coldest imaged exoplanet found to date, with a temperature of just 320 degrees Fahrenheit, which is slightly cooler than most ovens use to bake cookies.

The planet can be directly imaged thanks to emitted light produced by residual heat trapped since the planet’s formation. Still, the energy output of the planet is more than a million times weaker than the sun’s, so the planet can only be detected using lower-energy infrared light.

“Directly detecting and studying the light from gas-giant planets around other stars is ordinarily very difficult, since the planets we find usually have small-separation orbits and thus are buried in the glare of their host star’s light,” said Liu, Zhang’s thesis advisor.

“With its huge orbital separation, COCONUTS-2b will be a great laboratory for studying the atmosphere and composition of a young gas-giant planet.”

The planet was first detected in 2011 by the Wide-field Infrared Survey Explorer satellite, but it was believed to be a free-floating object, not orbiting a star. Zhang and his collaborators discovered that it is in fact gravitationally bound to a low-mass star, COCONUTS-2A, which is about one-third the mass of the sun, and about 10 times younger.

Due to its wide-separation orbit and cool host star, COCONUTS-2b’s skies would look dramatically different to an observer there compared to the skies on Earth. Nighttime and daytime would look basically the same, with the host star appearing as a bright red star in the dark sky.