Eddie Gonzales Jr. – MessageToEagle.com – A lot is known about galaxies. We know, for instance, that the stars within them are shaped from a blend of old stardust and molecules suspended in a gas. What remains a mystery, however, is the process that leads to these simple elements being pulled together to form a new star. 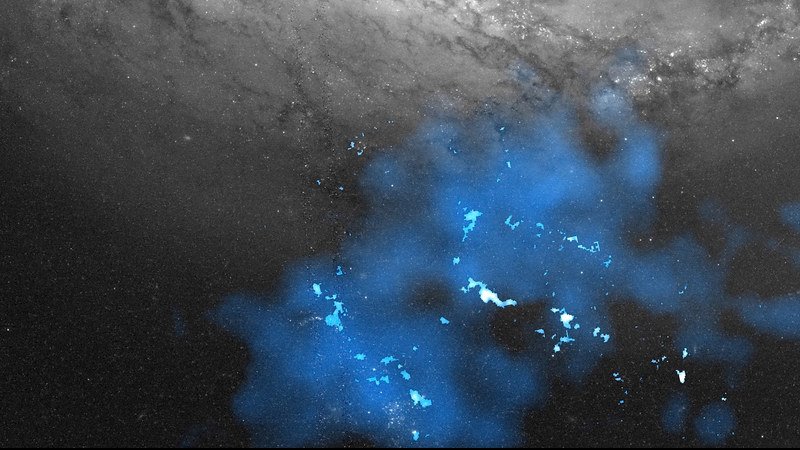 A tidal dwarf galaxy (blue) and a spiral galaxy (greyscale). The Milky Way is an example of a spiral galaxy. (Created from images taken by the Hubble Space Telescope and ALMA.)

But now an international team of scientists, including astrophysicists from the University of Bath and the National Astronomical Observatory (OAN) in Madrid, Spain have taken a significant step towards understanding how a galaxy’s gaseous content becomes organized into a new generation of stars.

Their findings have important implications for our understanding of how stars formed during the early days of the universe when galaxy collisions were frequent and dramatic, and star and galaxy formation occurred more actively than it does now.

For this study, the researchers used the Chile-based Atacama Large Millimeter Array (ALMA) – a network of radio telescopes combined to form one, mega telescope – to observe a type of galaxy called a tidal dwarf galaxy (TDG). TDGs emerge from the debris of two older galaxies colliding with great force. They are actively star-forming systems and pristine environments for scientists trying to piece together the early days of other galaxies, including our own – the Milky Way (thought to be 13.6-billion years old).

“The little galaxy we’ve been studying was born in a violent, gas-rich galactic collision and offers us a unique laboratory to study the physics of star formation in extreme environments,” said co-author Professor Carole Mundell, head of Astrophysics at the University of Bath.

From their observations, the researchers learned that a TDG’s molecular clouds are similar to those found in the Milky Way, both in terms of size and content. This suggests there is a universal star-formation process at play throughout the universe.

Unexpectedly, however, the TDG in the study (labeled TDG J1023+1952) also displayed a profusion of dispersed gas. In the Milky Way, clouds of gas are by far the most prominent star-forming factories.

“The fact that molecular gas appears in both cloud form and as diffuse gas was a surprise,” said Professor Mundell.

“ALMA’s observations were made with great precision so we can say with confidence that the contribution of diffuse gas is much higher in the tidal dwarf galaxy we studied than typically found in normal galaxies,” Dr Miguel Querejeta from the OAN in Spain and lead author of the study added:

He added: “This most likely means most of the molecular gas in this tidal dwarf galaxy is not involved in forming stars, which questions popular assumptions about star formation.”

Because of the vast distance that separates Earth from TDG J1023+1952 (around 50 million light-years), individual clouds of molecular gas appear as tiny regions in the sky when viewed through the naked eye. However, ALMA has the power to distinguish the smallest details.

“We have managed to identify clouds with an apparent size as small as observing a coin placed several kilometers away from us,” said Professor Mundell, adding: “It’s remarkable that we can now study stars and the gas clouds from which they are formed in a violent extragalactic collision with the same detail that we can study those forming in the calm environment of our own Milky Way.”