The two unique sarcophagi, ancient stone coffins, were found in the earthworks. At the time, the sarcophagi were moved to a location near the veterinary clinic and the African savanna zone. 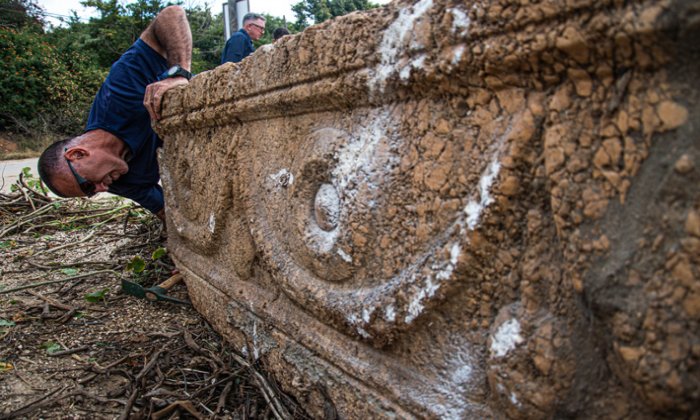 Still, over the years, they were forgotten and became buried under sand and thick vegetation.

Veteran safari workers present at the time said that the coffins had been found years ago in the area of the safari’s parking lot.

When work on the new wildlife hospital began a few days ago, the contractor working in the area started digging. Suddenly, Rami Tam, head of the African savanna zone, noticed the two coffins jutting out of the soil, according to  a statement released by The Friends of the Israel Antiquities Authority,

He quickly called animal health and management director Shmulik Yedvab, who came to see the find and contacted Alon Klein and Uzi Rothstein at the Israel Antiquities Authority’s Theft Prevention Unit. Hardly believing their eyes, the inspectors were astonished to see sarcophagi of this kind at the Safari Park. After a thorough examination, they excitedly confirmed the unique find’s great age.

Based on the stones and their ornate decoration, the sarcophagi were intended for high-status people who were buried near the Safari Park.

According to Israel Antiquities Authority archaeologists, the sarcophagi are roughly 1,800 years old and date from the Roman period.

Researchers believe the two sarcophagi may have been made for a husband and wife or for members of the same family. Photo by Yoli Schwartz/Israel Antiquities Authority

The sarcophagi, made of local stone – probably from the Judean Hills or Samaria – are locally-produced imitations of the prestigious sarcophagi made of Proconnesian marble from the Turkish island of Marmara. Found together, the two sarcophagi bear identical ornamentation, and they may have been made for a husband and wife or for members of the same family.

They are ornamented with symbolic discs – to protect and accompany the soul on its journey to the afterlife – and flower garlands, often used to decorate sarcophagi in the Hellenistic period as well. Between the garlands are oval blanks, which the archaeologists believe were originally intended to be filled with a customary grape-cluster motif, but for some unknown reason, the work remained unfinished.

The exact provenance of the sarcophagi is unknown. Still, they were probably buried near the Safari Park, in the region of Messubim – the site of ancient Bnei Brak in the Roman period, known to us from the Passover Haggadah.

The wealthy owners of the sarcophagi, buried with their grave goods, had no idea that the coffins would find a place of honor alongside giraffes, elephants, and a bird nursery. On Tuesday of this week, the sarcophagi were transferred to their rightful location in the Israeli National Treasures repositories.