UCLA researchers have developed a unique design of ultrathin films for highly flexible yet mechanically robust bioelectronic membranes that could pave the way for diagnostic on-skin sensors that fit precisely over the body’s contours and conform to its movements. 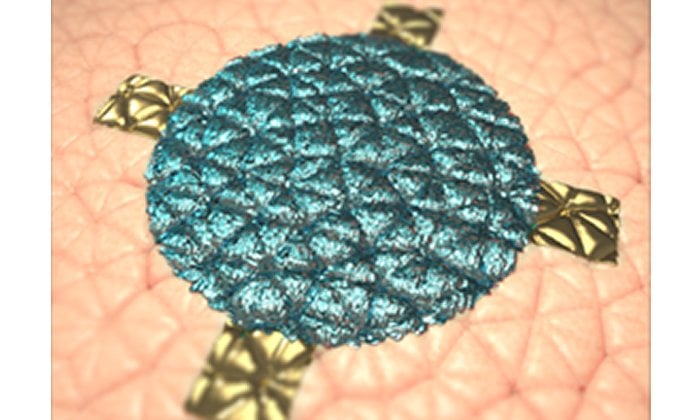 Held together by van der Waals forces, intermolecular interactions that can only take place at extremely close distances between atoms or molecules, the membrane is stretchable and adaptable to dynamically changing biological substrates, while being breathable and permeable to water and air. The advancement of the durable electronic material could lead to the development of noninvasive electronics for medicine, health care, biology, agriculture and horticulture. The researchers named the material van der Waals thin film, or VDWTF, which could serve as a foundational platform for living organisms to adopt electronic capabilities.

“Conceptually, the membrane is like a much-thinner version of kitchen cling film, with excellent semiconducting electronic functionality and unusual stretchability that naturally adapts to soft biological tissues with highly conformal interfaces,” Duan said. “It could open up a diverse range of powerful sensing and signaling applications. For example, wearable health-monitoring devices built with this material can accurately track electrophysiological signals at the organism level or down to the level of individual cells.”

The researchers created several demonstrations using the thin films, including a transistor that sat on top of a succulent plant’s leaf, whose abundant electrolytes were used to create the electronic circuit. They also created a similar transistor for human skin that used electrolytes-present skin cells to complete the circuit. In addition, the team developed an electrocardiogram that uses small circles of the film placed on a person’s right and left forearm and could detect their blinking during meditation. 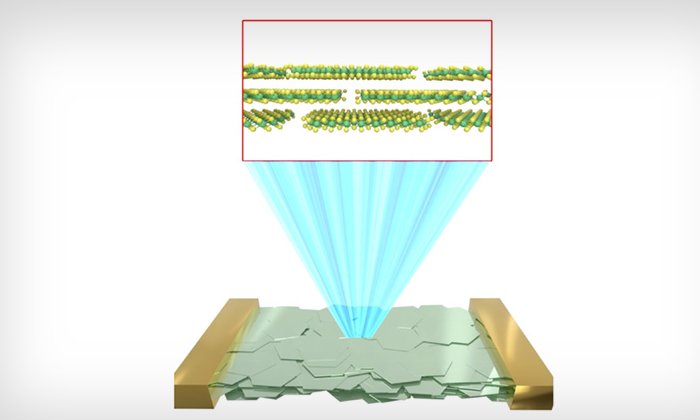 An animation showing how van der Waals thin films work. On the left, the layered patchwork design enables the membranes to stretch and flex over irregular geometries. On the right, a film with single continuous layers breaks upon stretching. (Credit: Yan et al./UCLA)

“Our proof-of-concept demonstrations using the van der Waals thin film really just hint at the myriad possibilities for this new material,” Huang said. “The membrane could serve as the connection for human-machine interfaces, enhanced robotics and artificial intelligence-enabled technologies that connect directly. This could open a pathway to synthetic electronic-cellular hybrids — cyborg-like living organisms with electronic enhancements.”

The ultrathin, approximately 10-nanometer-think electronic membranes are made of several layers of atomically thin sheets of the inorganic compound molybdenum disulfide. Each sheet is only two to three nanometers thick — more than 10,000 times thinner than the diameter of a piece of human hair.

The key to maintaining the membrane’s structural integrity while keeping it thin lies in its unique layered patchwork structure. The layers are not a single continuous sheet but instead are an assemblage of smaller pieces.

Instead of being held in place by rigid covalent bonds, the layers are loosely connected by nonbonding van der Waals forces. This allows the sheets to independently slide and rotate over one another, creating extraordinary pliability while keeping their electronic functionality intact.

The design also enables the membranes to stretch and flex over irregular geometries. The thin films can adhere to soft biological tissues with a snug fit over their micrometer-scale topologies, seamlessly merging with, and actively adapting to, dynamically changing biological substrates, such as skin, without tearing or interfering with the membranes’ functionality.

The layered patchwork creates a percolating network of nanochannels, large enough for air and water molecules to pass through them, giving the material its permeability and breathability.

With its unusual combination of high electronic performance and malleability, the van der Waals film addresses many challenges presented by other candidates for bioelectronic thin films, such as inorganic membranes or organic thin films. Those alternatives have been limited by their thickness, lack of stretchability, incompatibility to merge with irregular geometries of biological surface, or by their poor performance in wet biological environments.