Jan Bartek – MessageToEagle.com – Some years ago, paleontologists found sixteen preserved trunks of cypress trees, estimated to be eight million years old in the area of the Bükkábrány lignite mine in Hungary.

When archaeologists recently visited the same area they had the opportunity to admire these marvelous ancient trees, but more important to their work was the investigation of a 34-grave cemetery, which included special treasures from four tombs. 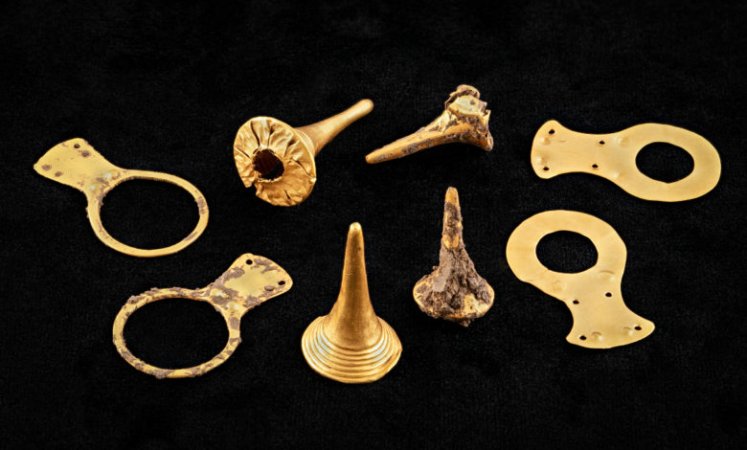 Scientists were fully aware that this region has been an important human settlement for thousands of years, but what treasures could they discover in the tombs?

The cemetery belonged to inhabitants who lived during the Copper Age. Experts suggest the graves hold the remains and burial gifts of the Bodrogkeresztúr culture that flourished in Hungary from 4000 to 3600 B.C.

The Bodrogkeresztúr culture had special burial practices. They buried the deceased with their heads oriented towards the east. Their cemeteries also reveal these Copper Age people made clear distinctions between males and females, who are buried on their right and left sides respectively.

There is no written documentation about this interesting ancient culture but based on previous archaeological discoveries scientists say they were among the first to wear gold jewelry in the Carpathian Basin.

“More than a dozen gold objects were found in the three women’s tombs excavated in the area of ​​the Bükkábrány mine, primarily pendants, which may once have been part of a headdress. These are among the most beautiful specimens known to date due to their design.

A unique feature of the recently unearthed cemetery is that one tomb of a prestigious man contained no gold objects; it did have a cracked stone blade, a polished stone ax, and a 2-pound copper pick. He may have used the last as a kind of scepter rather than as an actual tool. These four tombs show the wealth of distinguished individuals in the community. The objects must have held a high prestige value, as gold was still a rarity,” the Hungarian Insider reports.

It may be just a coincidence but some of the unearthed objects resemble the mysterious 3,000-year-old conical hats that are considered to be “hats of ancient wizards” but their original purpose has baffled scientists for many decades.

Whether the conical ancient hats were cult symbols, evidence of advanced astronomical objects, or served some entirely different purpose remains undetermined. What we do know with certainty is that numerous ancient civilizations either produced or depicted their gods wearing strange conical hats. Peculiar ancient conical hats have been discovered in many European countries, but even more interesting is the discovery Sumerian gods were often depicted in similar cone-shaped hats.

Of course, these recently discovered Hungarian objects could have served an entirely different purpose, but there is an interesting similarity that brings to mind the mystery of the 3,000-year-old conical hats scientists cannot solve yet.

On This Day In History: National Hero Paul Revere Warns Of The British Coming – On Apr 18, 1775