Eddie Gonzales Jr. – MessageToEagle.com – Light bulbs are a big upgrade from fires and candles. Every year, homes in informal settlements burn down in Africa because of fires used for heating and lighting. So electrical light bulbs with filaments brought about a revolution at home and work.

Still, all these options are too hot to handle carelessly. They also give off lots of heat, and light up everything around them with a rosy-tinged hue. In other words, good for romance and atmosphere, but not good for low lighting bills. 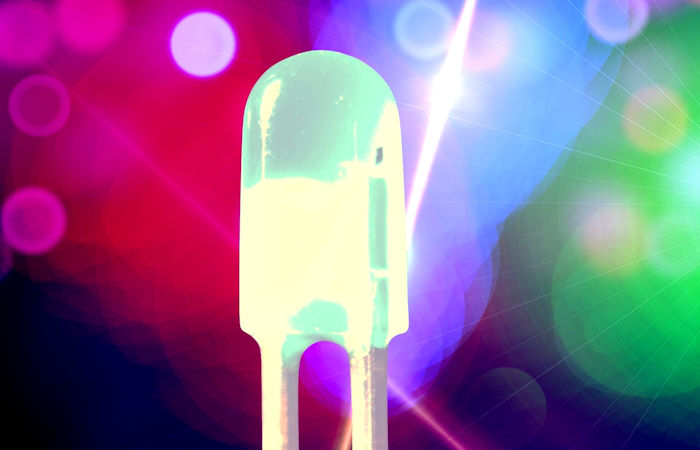 LED light bulbs swept in a revolution in safe lighting. But many people still risk fire at home because the bulbs are expensive to manufacture. UJ physics researchers discover they can get double the light intensity in a common light-emitting material. If the material succeeds, electric lighting bills could be much lower for everyone. Credit: Graphic by Therese van Wyk, University of Johannesburg, based on Pixabay images.

Then fluorescent lighting came along, using much less energy. These are fragile, prone to flickering, and contain poisonous mercury vapors.

These days, light emitting diode (LED) bulbs are available for middle-class homes. The bulbs reduce the lighting bill to a fraction of what’s needed for other options. They also last many times longer. An LED bulb can be a cozy “warm white” light or a “cold white” for offices. LED bulbs don’t get hot and don’t break easily. Their light can be focused, so it is easy to light up only what is needed.

Current LED bulbs are ideal for those with the finances to keep replacing them, and to pay ever-rising electricity bills. LEDs also function well in battery-powered lanterns during power outages or camping trips.

This still leaves a huge number of households and businesses around the globe vulnerable to inadequate lighting, or risking a fire at home by burning candles to see what they are cooking, or to study.

But if an LED bulb can be a fraction of the cost and last much longer, safe lighting can become accessible to more people.

“We’re working on making the light-emitting material in LEDs shine brighter and last longer, says Prof Odireleng Martin Ntwaeaborwa. He is at the Department of Physics at the University of Johannesburg (UJ).

“The material has to be chemically stable to make a long-lasting device. It should not degrade much over time. It should last as least twice as long as current materials, and be highly energy efficient. It needs to surpass what’s available in the market today,” he adds.

In an article published in the Journal of Luminescence, Ntwaeaborwa and others show how adding a common compound to a safe light-emitting material can create much brighter light. They added sulfate to zinc oxide doped with the rare earth cerium. They shined a laser on the compound to get it to emit light in the laboratory-based research.

“When we add sulfate to cerium-doped zinc oxide, the intensity of the emitted light is doubled. If this material is used in electronic devices in future, those will last much longer as well,” says Ntwaeaborwa.

Zinc oxide is being studied world-wide, because it is already used in many electronic devices, says Mr Machaba Letswalo, who performed the laboratory experiments towards attaining his Ph.D.

“The intensity of light emitted by zinc oxide doped with cerium is low. Adding the sulfate increases the intensity. In other words, the material emits a brighter light with the same laser excitation,” he adds.

“The sulfate helps the compound to better absorb the primary excitation from the laser, and to transfer this excitation to the light centers in the compound.”

Color edge in the search

The light-emitting material in the study doesn’t yet ‘shine as brightly’ as those used in industry, says Ntwaeaborwa.

“Compared to commercial LED bulbs, the light emitting material in this research is still a long way from reaching the same light intensity and durability. The intensity with the added sulfate is roughly half that of commercially used materials.

“However, the material is a promising candidate for future use in commercial LED lighting applications,” he says.

Cerium-doped zinc oxide is such an attractive candidate because of a very unusual thing that happens when a laser is shone into it.

“The material can emit different colors of light, depending on the excitation used to get the light emission,” says Dr. Balakrishna Avula, a co-author from UJ.

With one energy source, the material can be ‘excited’ into emitting red or blue or green light. This property is called chromaticity. And it is the single most important property in the search for cheap LED lighting, he says.

“When we add sulfate, the intensity of the red, blue and green light we get from the material, using the same laser for excitation, doubles,” he adds.

Three in one to slash costs

Rarer still, cerium-doped zinc oxide can perform the equivalent of a “Grand Slam” in the LED world. The material can emit white light, using the same laser source to get it to emit red, green, or blue light. That makes it a candidate to watch in the search for the next great LED.

In the study, adding the sulfate to cerium-doped zinc oxide also resulted in double the intensity of white light emitted.

“LED bulbs are expensive because we need three LEDs in one bulb to get white light. We need a red, a green and a blue. The three shining at the same time results in white light. This means a more complex bulb design which uses more materials,” says Ntwaeaborwa.

“If only one LED making white light can be used, that will be more cost-effective to manufacture, and LED bulbs can be much cheaper,” he adds.

No fires in the lab

Testing light-emitting materials in the laboratory can result in unpleasant surprises, says Letswalo.

“If you don’t yet know the basic properties of a compound, and how it will react to a laser or electricity, it can heat up and even explode. So, you must take precautions when exploring new materials. Once the basic science is understood, it becomes feasible to move research into a technology phase, he adds.”

Both zinc oxide and sulfate don’t melt, or catch fire, explode, or degrade much over time. They also don’t break easily. Both are easy to prepare in the lab, safe, non-toxic, and economical to work with. They’re environmentally friendly, and unlikely to create problems in storage, during manufacture, or in landfills.

“When using a single LED in a bulb for white light, the LED will have to be at least twice as bright as the ones used now. Fortunately, physics tells us that a brighter material will also last much longer,” says Ntwaeaborwa.