Eddie Gonzales Jr. – MessageToEagle.com – With Euclid, ESA’s future telescope we’ll be able to see something that is invisible. This future ESA telescope will map the structure of the universe and teach us more about invisible dark matter and dark energy.

Why do we assume that dark matter exists, if we have never seen it or even measured it? 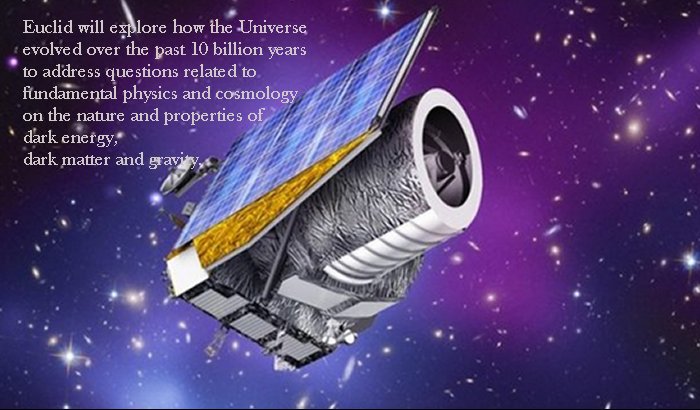 “We are orbiting the center of our galaxy at 220 kilometers per second,” says Henk Hoekstra, scientific coordinator of Euclid and astronomer from Leiden University.

“A bizarre speed, which fortunately we don’t notice. Still, something strange is going on. “Based on the number of stars in our Milky Way, the stars at the edge of the Milky Way should have much lower speed, but they move as fast as the Sun. Yet these stars are not being slung into the universe. Something is holding them together.”

Basically, there can only be one explanation: there is a matter that you cannot see, but that exerts extra gravity. In other words, dark matter. Hoekstra:

“Or the theory of gravity is wrong. But everything indicates that dark matter exists, only we still don’t know what it is. What we do know is that it does not absorb light or interact with it. So that literally makes it invisible.” If this is not strange enough: since 1998 we know that the expansion of the universe is accelerating. To explain this an even more mysterious ingredient is needed: ‘dark energy,” a term that simply encompasses all ideas that astronomers and physicists are currently studying.

“We have some knowledge-gaps and these cannot be filled with existing observations. So the only way forward is to take better measurements.” And that’s where Euclid comes in, the satellite that the European Space Agency will launch in 2022.

At a distance of 1.5 million kilometers from Earth, Euclid will map a third of the sky. So we can answer questions such as: How is the structure in the universe formed under the influence of gravity? How is all matter distributed in the universe?

And how does that change over time? Hoekstra: “An answer to the last question enables us to test models for dark energy directly.”

Hoekstra is one of the four cosmology coordinators and leaders of the project’s’ weak lensing.” “We are going to investigate how dark matter distorts space,” he says.

But how does this work?

“Mass distorts space and time around it. You can measure that effect, even if you can’t see the dark matter.” He uses an enlightening analogy to explain this. “Compare it to a tank of water containing a coin. If you tap that container, the water ripples and deforms the coin. Take several pictures of the coin and you’ll see that the coin looks different every time,” Hoekstra says.

“Suppose you’ve got a lot of coins and you know they’re originally round, then you can figure out how much water there is in that tank.” With dark matter it’s exactly the same, says the cosmologist. “Dark matter causes galaxies in the background to slightly deform. We can measure that distortion with Euclid by averaging the shapes of as many galaxies as possible.”

The more dark matter there is somewhere, the more the underlying galaxies are distorted. In this way, you can determine the distribution of dark matter in the universe. But first, a lot of sharp pictures are needed. “The more galaxies we measure, the more reliable the results. So we are talking about big data, not only because of the amount of data but also because of its complexity. The number of pictures that the Hubble telescope collected over the past 25 years is what we will collect in a few days.”

Not only is the amount of data large, so is the number of astronomers participating in Euclid. “It’s the largest astronomy team in the world, with about 1500 scientists, engineers, and technicians. However, the number of astronomers benefiting from Euclid will be much greater: the data will eventually be published publicly and can be used for various purposes, such as discovering the most distant quasars and identifying massive stars in nearby galaxies.

“In the beginning, the data will only be available for Euclid participants, after that we will have so-called data releases. In order to give people an idea of the first results, we will also have some quick releases. And those will be phenomenal,” Hoekstra says.