MessageToEagle.com – Each October 12th, Spain celebrates Hispanic Day with a national holiday to commemorate the day Christopher Columbus reached the Americas in 1492, but not all people in Spain think it’s an event worth celebrating.

Barcelona’s mayor, Ada Colau wants the statue of Christopher Columbus removed and replaced with a monument dedicated to Native Americans instead.

In 2015, Barcelona’s mayor Ada Colau said that Spain should not be marking “a genocide” with an €800,000 (£700,000) military parade. José María González, the Podemos-backed mayor of the southern city of Cádiz gave Colau support.

“We never discovered America; we massacred and suppressed a continent and its cultures in the name of God,” González wrote in one of her tweets. 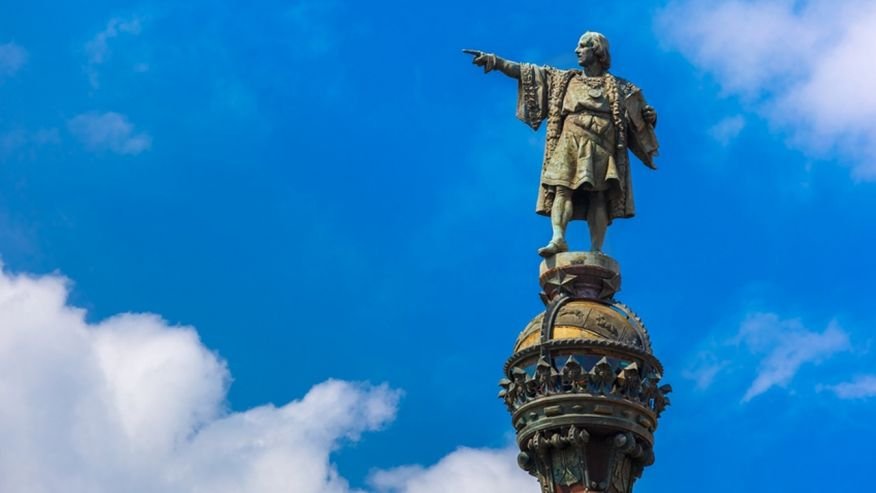 The Columbus Monument on the square Portal de la pau in Barcelona, Catalonia, Spain was originally erected in 1888.

Opponetns of the Columbus statue consider it to be a symbol of colonialism, oppression and segregation of the indigenous and African-American peoples of America.

The CUP Capgirem representatives say the statue should be removed, along with the base, as it pays homage to Columbus’ colleagues and patrons, including King Ferdinand and Queen Isabella.

Representative of the pro-Catalan independence Candidatura d’Unitat Popular (CUP) party have suggested the statue should be moved to a museum instead “to help an understanding of history,” and be replaced with a memorial to victims of oppression, celebrating resistance to colonialism and imperialism.

Kindred Spirits: Why Did The Irish Build A Monument In Honor Of Native Americans?

Ancient DNA Reveals The Story How Native Americans Were Wiped Out

Other statues proposed for dismantling include a statue of Antonio López, Marquis of Comillas, a well-known slave trader. The Lopez statue would also be replaced with a memorial, but for victims of the slave trade.

The initiative has been met with criticism as well, particularly from the liberal Convergència Democràtica de Catalunya (CDC) party branch. According to councillor Joaquim Forn, “the city has other problems to face at the moment” such as “the raising of rents and unemployment” and described the proposal as “frivolous.”

The unionist Ciutadans party refused to support the proposal and accused CUP of “mixing up changes with nonsense.”

Despite this, there are more and more people who think celebrating Christopher Columbus on October 12 is simply wrong and his statue should be removed and replaced with a monument dedicated to all Native Americans who died when Columbus arrived in America.

By examining ancient DNA   of 92 pre-Columbian mummies and skeletons, between 500 and 8600 years old, scientists have now confirmed the devastating impact of European colonization on the Indigenous American populations of the time.

The study reveals a striking absence of the pre-Columbian genetic lineages in modern Indigenous Americans; showing extinction of these lineages with the arrival of the Spaniards. So, many people have good reason to ask whether the arrival of Columbus is really an event Spain should celebrate.