Eddie Gonzales Jr. – MessageToEagle.com –  An exceptionally well-preserved collection of fossils discovered in eastern Yunnan Province, China, has enabled scientists to solve a centuries-old riddle in the evolution of life on earth, revealing what the first animals to make skeletons looked like. The results have been published in Proceedings of the Royal Society B. 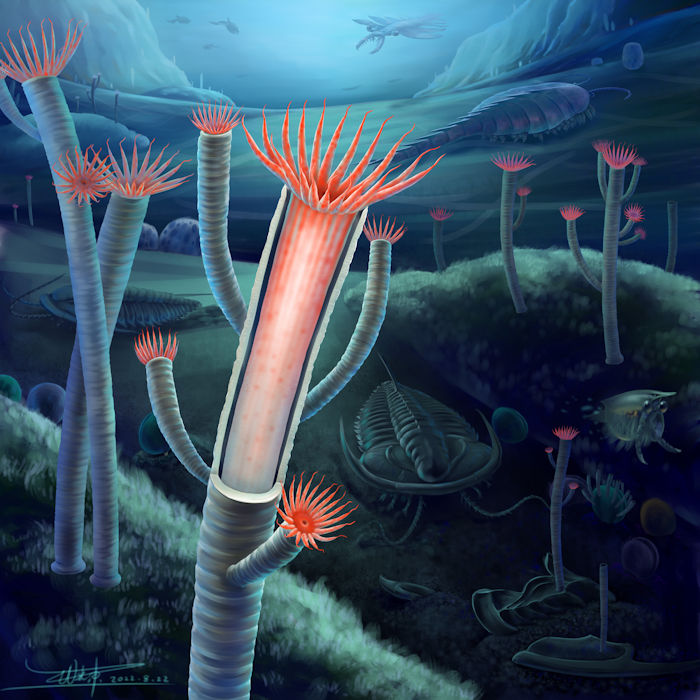 The first animals to build hard and robust skeletons appear suddenly in the fossil record in a geological blink of an eye around 550-520 million years ago during an event called the Cambrian Explosion. Many of these early fossils are simple hollow tubes ranging from a few millimeters to many centimeters in length. However, what sort of animals made these skeletons was almost completely unknown, because they lack preservation of the soft parts needed to identify them as belonging to major groups of animals that are still alive today.

The new collection of 514 million year old fossils includes four specimens of Gangtoucunia aspera with soft tissues still intact, including the gut and mouthparts. These reveal that this species had a mouth fringed with a ring of smooth, unbranched tentacles about 5 mm long. It’s likely that these were used to sting and capture prey, such as small arthropods. The fossils also show that Gangtoucunia had a blind-ended gut (open only at one end), partitioned into internal cavities, that filled the length of the tube. 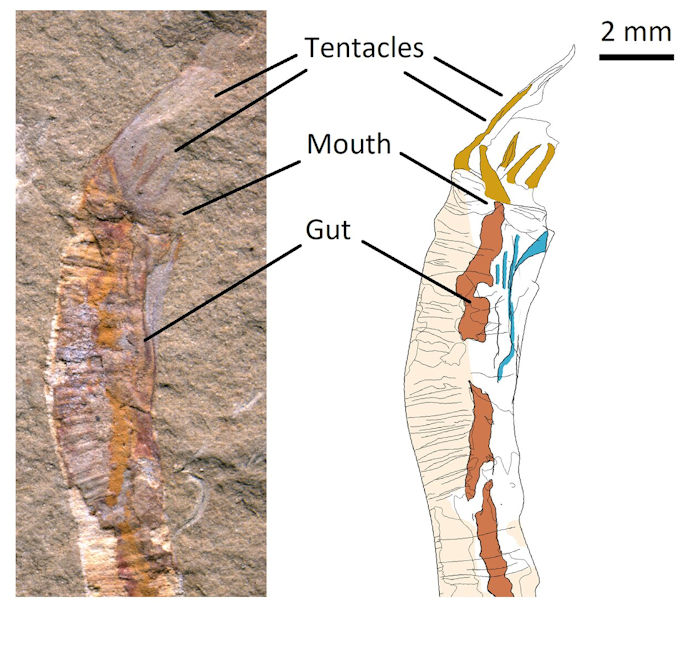 These are features found today only in modern jellyfish, anemones and their close relatives (known as cnidarians), organisms whose soft parts are extremely rare in the fossil record. The study shows that these simple animals was among the first to build the hard skeletons that make up much of the known fossil record.

According to the researchers, Gangtoucunia would have looked similar to modern scyphozoan jellyfish polyps, with a hard tubular structure anchored to the underlying substrate. The tentacle mouth would have extended outside the tube, but could have been retracted inside the tube to avoid predators. Unlike living jellyfish polyps however, the tube of Gangtoucunia was made of calcium phosphate, a hard mineral that makes up our own teeth and bones. Use of this material to build skeletons has become more rare among animals over time.

Corresponding author Dr. Luke Parry, Department of Earth Sciences, University of Oxford, said, “This really is a one-in-million discovery. These mysterious tubes are often found in groups of hundreds of individuals, but until now they have been regarded as ‘problematic’ fossils, because we had no way of classifying them. Thanks to these extraordinary new specimens, a key piece of the evolutionary puzzle has been put firmly in place.”

The new specimens clearly demonstrate that Gangtoucunia was not related to annelid worms (earthworms, polychaetes and their relatives) as had been previously suggested for similar fossils. It is now clear that Gangtoucunia’s body had a smooth exterior and a gut partitioned longitudinally, whereas annelids have segmented bodies with transverse partitioning of the body.

The fossil was found at a site in the Gaoloufang section in Kunming, eastern Yunnan Province, China. Here, anaerobic (oxygen-poor) conditions limit the presence of bacteria that normally degrade soft tissues in fossils.

Ph.D. student Guangxu Zhang, who collected and discovered the specimens, said, “The first time I discovered the pink soft tissue on top of a Gangtoucunia tube, I was surprised and confused about what they were. In the following month, I found three more specimens with soft tissue preservation, which was very exciting and made me rethink the affinity of Gangtoucunia. The soft tissue of Gangtoucunia, particularly the tentacles, reveals that it is certainly not a priapulid-like worm as previous studies suggested, but more like a coral, and then I realized that it is a cnidarian.” 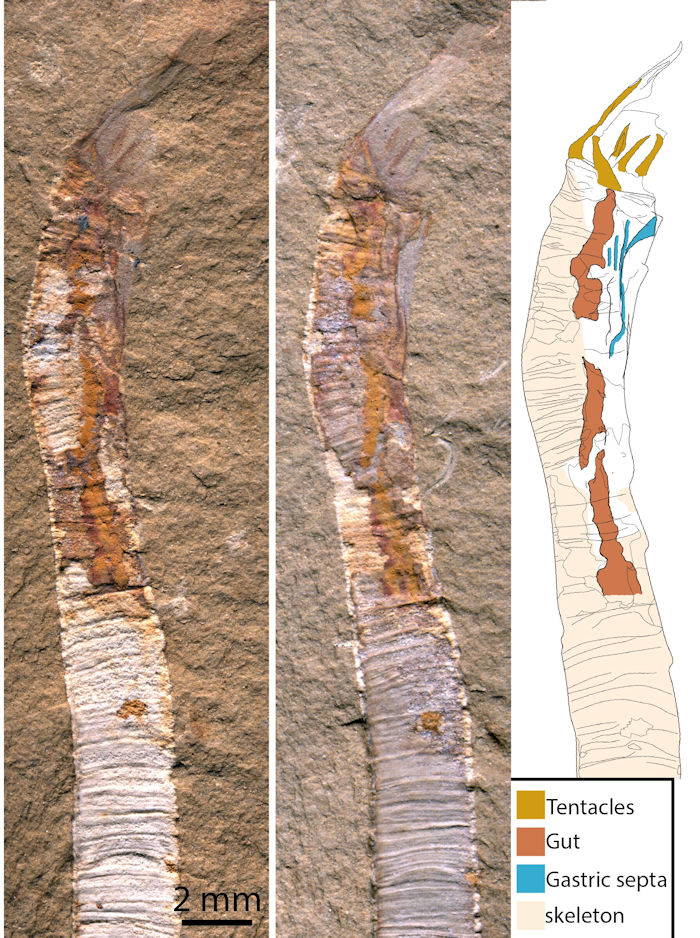 Although the fossil clearly shows that Gangtoucunia was a primitive jellyfish, this doesn’t rule out the possibility that other early tube-fossil species looked very different. From Cambrian rocks in Yunnan province, the research team have previously found well-preserved tube fossils that could be identified as priapulids (marine worms), lobopodians (worms with paired legs, closely related to arthropods today) and annelids.

Co-corresponding author Xiaoya Ma (Yunnan University and University of Exeter) said, “A tubicolous mode of life seems to have become increasingly common in the Cambrian, which might be an adaptive response to increasing predation pressure in the early Cambrian. This study demonstrates that exceptional soft-tissue preservation is crucial for us to understand these ancient animals.”

The study was published in Proceedings of the Royal Society B: Biological Sciences