MessageToEagle.com – Children were involved in the construction of a gigantic moose-geoglyph in the Ural Mountains which was only discovered thanks to images taken from space.

It predates Peru’s famous Nazca Lines by thousands of years, archaeologists have announced. But they are no nearer answering why ancient man made it, nor can they yet fathom which group built the geoglyph; archeological traces found so far in the area do not show a culture with sufficient refinement.
“Was it to impress the gods or did it have some other purpose? 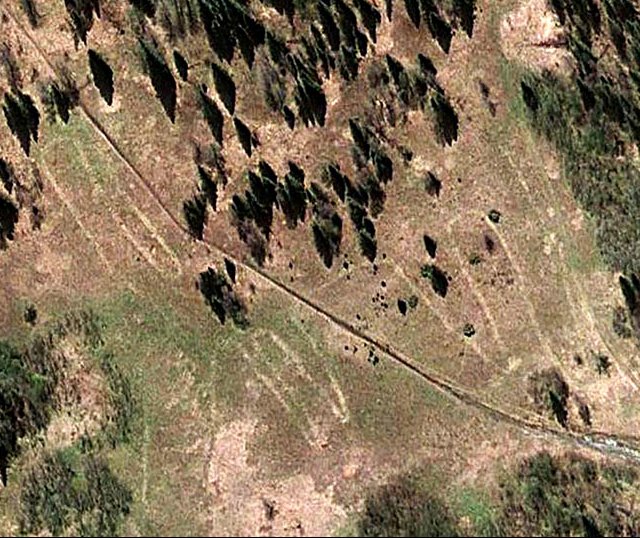 Experts have been examining the giant moose-shaped stone structure since it was discovered in 2011 and have now confirmed it is the world’s oldest.

Located near Lake Zyuratkul in the Ural Mountains, it stretches for about 275 metres and depicts an animal with four legs, antlers and a long muzzle,” reports The Siberian Times.
Two years ago researchers said they estimated the site could date back as far as 6,000BC based on the style of the stone-working, called lithic chipping.

Now new details about the geoglyph have been released as archaeologists revealed it was most likely created between 3,000 and 4,000BC.
Perhaps the most interesting development is that tools found at the site indicate it was worked on assiduously by children as well as adults in a large-scale community accomplishment.

Of 155 tools found beside the geoglyph, the majority were used for digging or breaking stones. 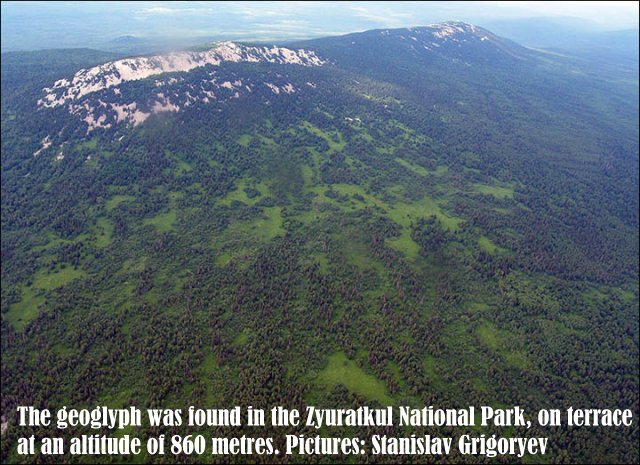 Stanislav Grigoryev, a senior researcher from the Chelyabinsk History and Archaeology Institute, said: ‘Judging by the different sizes of the tools – from 17cm-long and weighing about three kilograms to some being just two centimetres – we can assume they were used by both adults and children.
We can also assume it means that everyone participated in creating the moose.

‘But it was not a kind of slave labour of children. They were involved to share common values, to join something important to all the people.’

The moose was discovered by chance in 2011 by local researcher Alexander Shestakov after he spotted it trawling through satellite images from Google Earth.

He alerted archaeologists, who sent out a hydroplane and paraglider to survey the area, before the first expedition to the site was undertaken. The geoglyph was found 200km west of Chelyabink, in the Zyuratkul National Park, situated on terrace at an altitude of 860 metres.

Initial fieldwork found simple techniques were used to create the moose, with turf and earth 10-metres-wide dug out to make its shape before being filled with stones. ‘The figure would initially have looked white and slightly shiny against the green grass background,’ he said.

Different methods were deloyed to make the various parts of the geoglyph; for instance, a mix of clay and crushed stone was used to make the hooves. When part of the hind leg was excavated, archaeologists found the largest stones were on the edges, with the smaller ones inside. While there are similarities to the world famous Nazca Lines, in Peru, and to geoglyphs in England – such as the White Horse in Oxfordshire or the Dorset Giant – the experts believe there are no links.

Discovered in 1927, the Nazca Lines feature hundreds of lines, shapes and designs of animals, the earliest of which were created around 500BC. Instead, archaeologists say the Russian moose was drawn in a style similar to petroglyphs found in Finland. Excavations of nearby land could provide further clues as to its origins and to the people who made it. Radiocarbon dating has been carried out, narrowing down the period in which the geoglyph was created to between 3,000BC and 4,000BC, some 5,000 or 6,000 years ago.

But further testing is needed – for example optically-stimulated luminescence dating as well as pollen analysis – is planned.
Mr Grigoryev said: ‘It may help if we find ceramics on the site. Ceramics could help us with the date and with understanding who these people were that created the geoglyph. It’s not quite clear who the builders were. It is obvious that its creation has a big social importance. Geoglyphs are the symbols of unity’.

Yet archeologists still cannot fathom the identity of their sophisticated social group who worked in the massive operation of constructing structure visible from space.

‘Facts say that on this territory in the Neolithic and Eneolithic Ages lived hunters and fishermen. We conducted archaeological works on the site of a settlement nearby, on the lake shore, on the assumption that the builders of the geoglyph might live there. People have lived here since the Neolithic era but there was no sign of large social structures, nor that they did anything other than hunting and fishing’, Stanislav Grigoryev said.

‘It puzzles me a lot, I keep thinking about the people that built the geoglyph, and their purpose’. 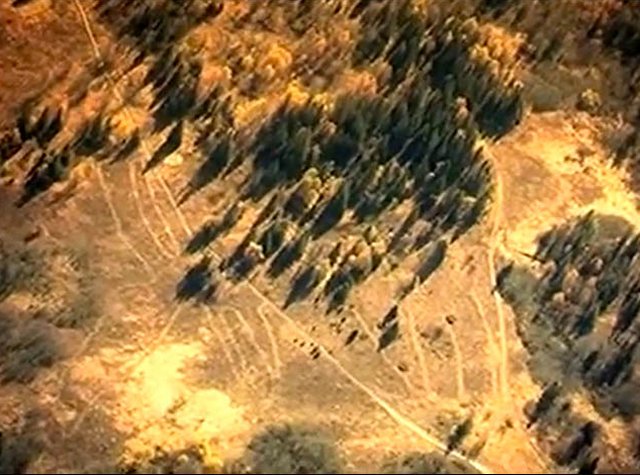 The research team found traces of two ancient fireplaces at the site of the moose, both used only once, possibly in a significant ritual. Despite many unanswered questions, Mr Grigoryev warned against future large scale excavation and said officials should consider preserving the sanctity of the site. At the moment it is the world’s most ancient geoglyph, dating back to about 4,000BC.

‘The geoglyphs in Nazca are younger as are those in the UK, though there might be some of comparable age in Britain. But at the moment Zyuratkul’s is the most ancient, and is the world’s largest figure image, but which we mean geometrical or zoomorphic figures, because there are very long lines in Nasca, and here we speak about the figure. So it’s not the largest geoglyph, but the largest figure image.

‘It could become a tourist attraction and with a museum, but we need to think how it might be implemented’.

An intriguing question is whether more geoglyphs will become visible as researchers analyse Google Earth in detail.

Ancient Unsolved Mysteries Of Siberia – A Place Full Of Secrets

Some 50 geoglyphs with various shapes and sizes, including a massive swastika, were recently discovered across northern Kazakhstan. There is no doubting the excitement people feel from seeing the moose. Russian journalist Yevgeny Bezborodov, originally from Siberia, said: ‘It’s rare when you film something truly exclusive – and this is what we got in the South Urals’. 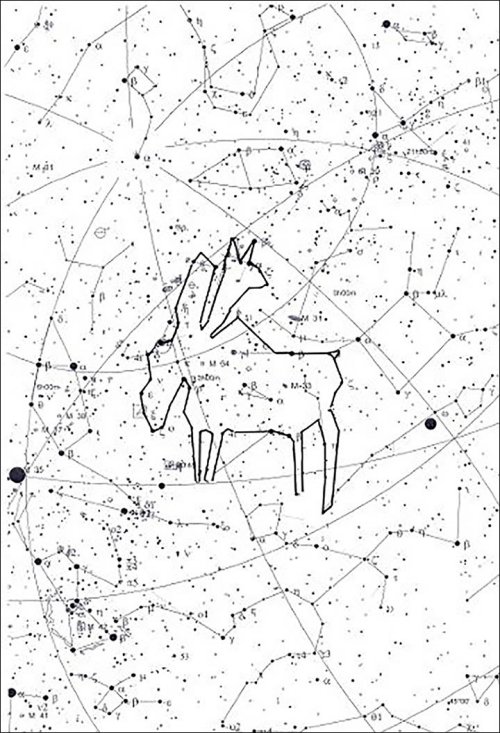 With tools to work with primitive, it may be that geoglyphs were early forms of statues to be worshipped. This could certainly be true of the Long Man of Wilmington, in England, which is thought to date as far back as 2,000BC and is the tallest in Europe. Some experts say the figure is a representation of an Anglo Saxon war god and the site is considered sacred by Pagans.
2. ASTRONOMY

A handful of archaeologists believe geoglyphs could have been drawn to represent the important stars, planetary events like sun solstices, or constellations. However a 1968 study by the National Geographic Society found that while some of the Nazca lines did point to the positions of the Sun and Moon, it was no more than could be expected by mere chance.

There is a theory that geoglyphs were simply ways of civilisations to mark their own territories in clear and visible ways. More often than they are giant structures in areas that can be seen from a distance or from a high vantage point, leading some experts to say they were used to mark ownership of the land.

The discovery of fireplaces at the Russian moose and other geoglyphs adds to speculation they were used for rituals. There is a theory that the Nazca used to dance along the lines of their geoglyphs when they prayed for rain, with many of the same images featuring on pottery from the time.

A common yet bizarre theory put forward about strange markings on the ground is that they were used by aliens. Many speculate that the straight lines of Nazca, for instance, were created as runways for spaceships, but why extra-terrestrials would attempt to land on geoglyphs in the shape of monkeys, spiders, or giant Russian moose is another question.