Eddie Gonzales Jr. – MessageToEagle.com – Researchers who traveled to Yellowstone National Park discovered bacteria that can eat and breathe electricity through the solid carbon surface of the electrodes.

These tiny creatures found in a pool of water are not merely of academic interest.

They can help us fight environmental pollution and provide scientists with ideas how to develop a sustainable energy plan. Such bacteria can “eat” pollution by converting toxic pollutants into less harmful substances and generating electricity in the process. 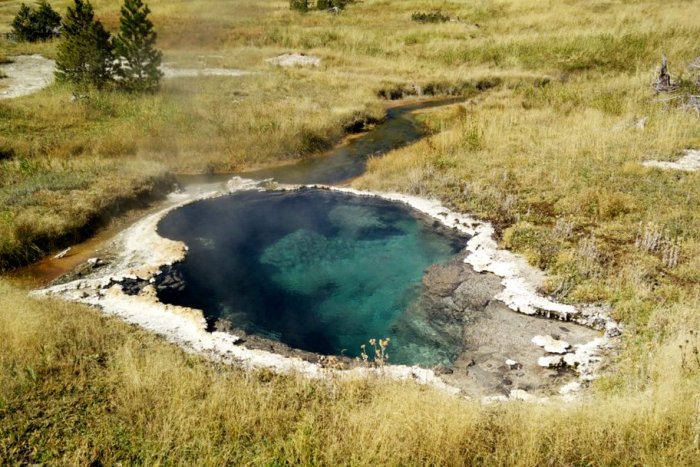 Pools of hot water like this are the home to bacteria that can eat and breathe electricity. Credit: Washington State University

According to researchers, this was the first time such bacteria were collected in situ in an extreme environment like an alkaline hot spring where temperatures ranged from about 110 to nearly 200 degrees Fahrenheit.

“As these bacteria pass their electrons into metals or other solid surfaces, they can produce a stream of electricity that can be used for low-power applications,” Haluk Beyenal from the Washington State University said in a press statement.

Most living organisms, including humans   use electrons, which are tiny negatively-charged particles, in a complex chain of chemical reactions to power their bodies.

Every organism needs a source of electrons and a place to dump the electrons to live. While we humans get our electrons from sugars in the food we eat and pass them into the oxygen we breathe through our lungs, several types of bacteria dump their electrons to outside metals or minerals, using protruding hair-like wires.

To collect bacteria in such an extreme environment over 32 days, scientists invented a cheap portable potentiostat, an electronic device that could control the electrodes submerged in the hot springs for long periods of time.

“The natural conditions found in geothermal features such as hot springs are difficult to replicate in laboratory settings,” Beyenal said. “So, we developed a new strategy to enrich heat-loving bacteria in their natural environment.”

Previous discoveries show bacteria are strange and very complicated creatures. It can live in super extreme conditions like drought, radiation, heat and overcrowding.

It’s able to communicate chemically with each other and consumes sulfur compounds and produce droplets of toxic sulfuric acid (similar to battery acid) as waste!