Eddie Gonzales Jr. – MessageToEagle.com – Small spheres suspended in a liquid move enough like molecules that the physics for one can be used to mimic the physics of the other.

That’s why the discovery of some unusual physics in colloids—particles dispersed in a solution such as milk, for example—could be of interest to researchers who study biological interactions. 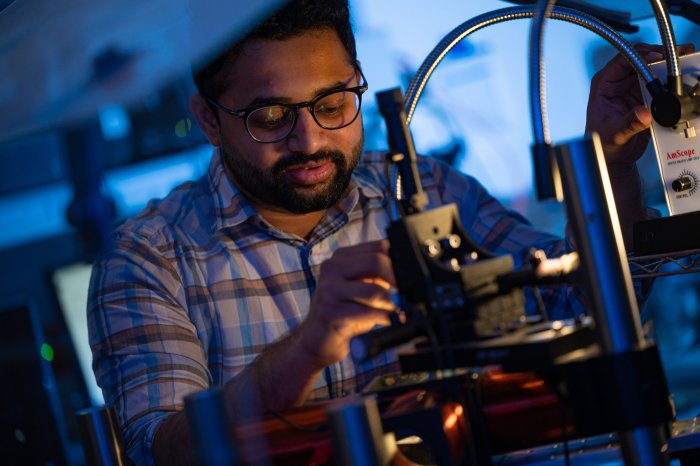 Chemical and biomolecular engineer Sibani Lisa Biswal and postdoctoral fellow Kedar Joshi of Rice University’s George R. Brown School of Engineering found that when a colloid—in this case, a suspension of micron-sized paramagnetic particles—is jostled with a magnetic field, it still tends to seek its lowest-energy state in the same way that gas and liquid systems do.

“It’s like trying to blow a bubble in an odd shape,” Biswal said. “It always goes back to a sphere.”

Their finding, detailed in the Proceedings of the National Academy of Sciences, doesn’t exactly challenge Kelvin’s equation, which describes thermodynamic interactions between liquids and gases. But it does stretch the equation a bit.

“Kelvin’s equation comes from classical thermodynamics, and tells us how liquid and gas phases are in equilibrium with each other,” Biswal said. “Kedar likes to give the example of water droplets: how they stay a certain size, even with water and vapor phases around them.”

“These colloidal groups are like the droplets,” Joshi said. “They try to stay circular, rather than take an arbitrary shape. Our thought was these equations should explain not just one or two but every property of our colloids as well.”

The study extends the lab’s previous work to characterize how particles interact in solutions, the most recent demonstrating how superparamagnetic colloids interact with each other in a rapidly spinning magnetic field.

“This one falls under our purview of how we think about gases and liquids, but in a different way,” Biswal said. “Kedar decided to apply the formula to our system, in which we can see the particles, we can count them and actually track them through their ‘gas’ and condensed phases.”

The results were surprising, they wrote, because Kelvin’s equation is not intended to apply to systems kicked out of equilibrium. In the Rice experiments, the particles represented liquid molecules when clumped and gas molecules when dispersed, both qualities controlled by the rotating magnetic field, a stand-in for the equation’s temperature variable.

The researchers threw their colloid out of equilibrium by spinning it with the field. In spite of that, they found the equation still held true for the interactions they observed as the particles came together or flew apart depending on the strength of the field.

“The particles followed the rotating field; they look like little miniaturized stir bars,” Biswal said. “But if we increased the frequency, we found that it generated an isotropic attractive interaction between the particles.”

The strength of this fast rotating magnetic field became a knob that raised and lowered the “temperature” and controlled whether the particles condensed into a liquid or dispersed like a gas. “The system does behave like it’s being affected by temperature,” said Joshi, who recently left Rice to join the faculty at the Indian Institute of Technology, Goa. “We were keen to show that it would replicate what classical phases do in terms of vapor pressure, viscosity and surface tension as well.”

Biswal said the study also has implications for devices like control displays that employ liquid crystals. “The new paper is about the idea that you can have coexistence (between the liquid and gas phases),” she said. “Being able to see how magnetic fields can be used to control how these systems are able to achieve coexisting phases is important to designing materials that are reconfigurable or have the desired property.”