Eddie Gonzales Jr. – MessageToEagle.com – Using a supercomputer simulation, a research team at Lund University in Sweden has succeeded in following the development of a galaxy over a span of 13.8 billion years. The study shows how, due to interstellar frontal collisions, young and chaotic galaxies over time mature into spiral galaxies such as the Milky Way. 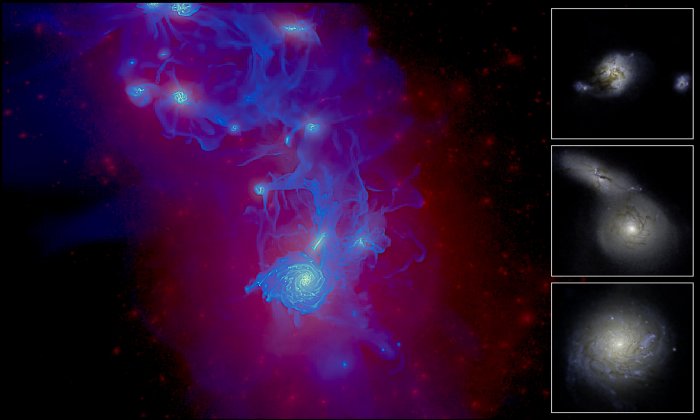 Soon after the Big Bang 13.8 billion years ago, the universe was an unruly place. Galaxies constantly collided. Stars formed at an enormous rate inside gigantic gas clouds. However, after a few billion years of intergalactic chaos,the unruly, embryonic galaxies became more stable and over time matured into well-ordered spiral galaxies. The exact course of these developments has long been a mystery to the world’s astronomers. However, in a new study published in Monthly Notices of the Royal Astronomical Society, researchers have been able to provide some clarity on the matter.

“Using a supercomputer, we have created a high-resolution simulation that provides a detailed picture of a galaxy’s development since the Big Bang, and how young chaotic galaxies transition into well-ordered spirals” says Oscar Agertz, astronomy researcher at Lund University.

In the study, the astronomers, led by Oscar Agertz and Florent Renaud, use the Milky Way’s stars as a starting point. The stars act as time capsules that divulge secrets about distant epochs and the environment in which they were formed. Their positions, speeds and amounts of various chemical elements can therefore, with the assistance of computer simulations, help us understand how our own galaxy was formed.

“We have discovered that when two large galaxies collide, a new disc can be created around the old one due to the enormous inflows of star-forming gas. Our simulation shows that the old and new discs slowly merged over a period of several billion years. This is something that not only resulted in a stable spiral galaxy, but also in populations of stars that are similar to those in the Milky Way,” says Florent Renaud, astronomy researcher at Lund University.

The new findings will help astronomers to interpret current and future mappings of the Milky Way. The study points to a new direction for research in which the main focus will be on the interaction between large galaxy collisions and how spiral galaxies’ discs are formed. The research team in Lund has already started new supercomputer simulations in cooperation with the research infrastructure PRACE (Partnership for Advanced Computing in Europe).

“With the current study and our new computer simulations we will generate a lot of information which means we can better understand the Milky Way’s fascinating life since the beginning of the universe,” concludes Oscar Agertz.