Eddie Gonzales Jr. – MessageToEagle.com – Researchers with the University of Chicago Pritzker School of Molecular Engineering have shown for the first time how to design the basic elements needed for logic operations using a kind of material called a liquid crystal — paving the way for a completely novel way of performing computations. 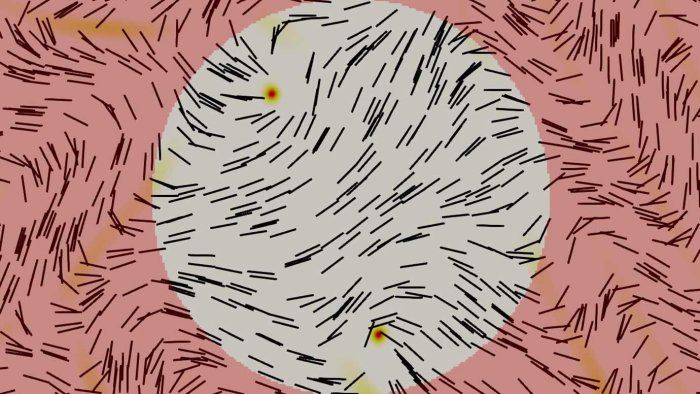 Researchers with the University of Chicago Pritzker School of Molecular Engineering laid out how liquid crystals could be used to perform computations using techniques, where the redder region is activated by light.

The results are published in Science Advances, are not likely to become transistors or computers right away, but the technique could point the way towards devices with new functions in sensing, computing, and robotics.

“We showed you can create the elementary building blocks of a circuit — gates, amplifiers, and conductors — which means you should be able to assemble them into arrangements capable of performing more complex operations,” said Juan de Pablo, the Liew Family Professor in Molecular Engineering and senior scientist at Argonne National Laboratory, and the senior corresponding author on the paper. “It’s a really exciting step for the field of active materials.”

The details in the defect

The research aimed to take a closer look at a type of material called a liquid crystal. The molecules in a liquid crystal tend to be elongated, and when packed together they adopt a structure that has some order, like the straight rows of atoms in a diamond crystal — but instead of being stuck in place as in a solid, this structure can also shift around as a liquid does. Scientists are always looking for these kinds of oddities because they can utilize these unusual properties as the basis of new technologies; liquid crystals, for example, are in the LCD TV you may already have in your home or in the screen of your laptop.

One consequence of this odd molecular order is that there are spots in all liquid crystals where the ordered regions bump up against each other and their orientations don’t quite match, creating what scientists call “topological defects.” These spots move around as the liquid crystal moves.

Scientists are intrigued by these defects, wondering if they could be used to carry information — similar to the functions that electrons serve in the circuits of your laptop or phone. But in order to make technology out of these defects, you’d need to be able to shepherd them around where you want them, and it’s proved very difficult to control their behavior. “Normally, if you look through a microscope at an experiment with an active liquid crystal, you would see complete chaos — defects shifting around all over the place,” said de Pablo.

But last year, an effort from de Pablo’s lab headed by Rui Zhang, then a postdoctoral scholar at the Pritzker School of Molecular Engineering, in collaboration with Prof. Margaret Gardel’s lab from UChicago and Prof. Zev Bryant’s lab from Stanford, figured out a set of techniques to control these topological defects. They showed that if they controlled where they put energy into the liquid crystal by shining a light only on specific areas, they could guide the defects to move in specific directions.

In a new paper, they took it a logical step further and determined that it should be theoretically possible to use these techniques to make a liquid crystal perform operations like a computer.

“These have many of the characteristics of electrons in a circuit — we can move them long distances, amplify them, and shut or open their transport as in a transistor gate, which means we could use them for relatively sophisticated operations,” said Zhang, now an assistant professor at the Hong Kong University of Science and Technology.

Though calculations suggest these systems could be used for computations, they are more likely to be uniquely useful in applications such as the field of soft robotics, the scientists said. Researchers are interested in soft robots — robots with bodies that aren’t made out of hard metal or plastic, but rather stretchy and soft materials — because their flexibility and gentle touch means they can perform functions that hard-bodied robots cannot. The team can imagine creating such robots that can do some of their own “thinking” using active liquid crystals.

They can also imagine using topological defects to ferry small amounts of liquid or other materials from place to place inside tiny devices. “For example, perhaps one could perform functions inside a synthetic cell,” said Zhang. It’s possible that nature already uses similar mechanisms to transmit information or perform behaviors inside cells, he said.

The research team, which also includes co-author and UChicago postdoctoral researcher Ali Mozaffari, is working with collaborators to carry out experiments to confirm the theoretical findings.

“It’s not often that you are able to see a new way to do computing,” de Pablo said.

This work used resources of the University of Chicago Materials Research Science and Engineering Center.