In their research, astronomers have – for the first time – used the technique of polarimetry to determine the properties of atmospheric clouds outside of the solar system or exoclouds. 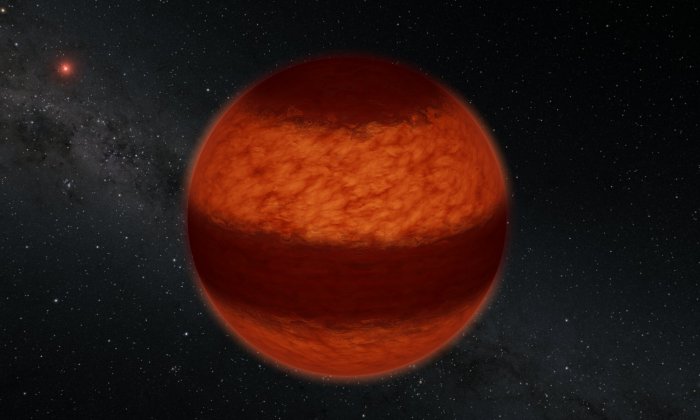 Astronomers have found evidence for a striped pattern of clouds on the brown dwarf called Luhman 16A, as illustrated here in this artist’s concept. The bands of clouds were inferred using a technique called polarimetry, in which polarized light is measured from an astrophysical object much like polarized sunglasses are used to block out glare. This is the first time that polarimetry has been used to measure cloud patterns on a brown dwarf. The red object in the background is Luhman 16B, the partner brown dwarf to Luhman 16A. Together, this pair is the closest brown dwarf system to Earth at 6.5 light-years away. Credit: Caltech/R. Hurt (IPAC)

Brown dwarfs are objects heavier than planets but lighter than stars, and typically have 13 to 80 times the mass of Jupiter. Luhman 16A is part of a binary system containing a second brown dwarf, Luhman 16B. At a distance of 6.5 light-years, it’s the third closest system to our Sun after Alpha Centauri and Barnard’s Star. Both brown dwarfs weigh about 30 times as much as Jupiter.

Despite the fact that Luhman 16A and 16B have similar masses and temperatures (about 1,900° F or 1,000° C), and presumably formed at the same time, they show markedly different weather. Luhman 16B shows no sign of stationary cloud bands, instead of exhibiting evidence of more irregular, patchy clouds. Luhman 16B, therefore, has noticeable brightness variations as a result of its cloudy features, unlike Luhman 16A.

“Like Earth and Venus, these objects are twins with very different weather,” said Julien Girard of the Space Telescope Science Institute in Baltimore, Maryland, a member of the discovery team. “It can rain things like silicates or ammonia. It’s pretty awful weather, actually.”

The researchers used an instrument on the Very Large Telescope in Chile to study polarized light from the Luhman 16 system. Polarization is a property of light that represents the direction that the light wave oscillates. Polarized sunglasses block out one direction of polarization to reduce glare and improve contrast.

“Instead of trying to block out that glare, we’re trying to measure it,” explained lead author Max Millar-Blanchaer of the California Institute of Technology (Caltech) in Pasadena, California.

When light is reflected off of particles, such as cloud droplets, it can favor a certain angle of polarization. By measuring the preferred polarization of light from a distant system, astronomers can deduce the presence of clouds without directly resolving either brown dwarf’s cloud structure.

“Even from light-years away, we can use polarization to determine what the light encountered along its path,” added Girard.

“To determine what the light encountered on its way we compared observations against models with different properties: brown dwarf atmospheres with solid cloud decks, striped cloud bands, and even brown dwarfs that are oblate due to their fast rotation. We found that only models of atmospheres with cloud bands could match our observations of Luhman 16A,” explained Theodora Karalidi of the University of Central Florida in Orlando, Florida, a member of the discovery team.

The polarimetry technique isn’t limited to brown dwarfs. It can also be applied to exoplanets orbiting distant stars.

NASA’s upcoming James Webb Space Telescope would be able to study systems like Luhman 16 to look for signs of brightness variations in infrared light that are indicative of cloud features. NASA’s Wide-Field Infrared Survey Telescope (WFIRST) will be equipped with a coronagraph instrument that can conduct polarimetry and may be able to detect giant exoplanets in reflected light and eventual signs of clouds in their atmospheres. 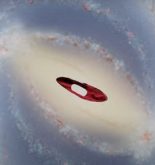