Eddie Gonzales Jr. – MessageToEagle.com – Using observations and archival data from several of NSF’s NOIRLab’s observatories, together with observations from telescopes around the world and in orbit, astronomers have discovered at least 70 new free-floating planets—planets that wander through space without a parent star—in a nearby region of the Milky Way. This is the largest sample of such planets found in a single group and it nearly doubles the number known over the entire sky.

Researchers have discovered a group of free-floating planets—planets not orbiting a star—in a nearby region of the Milky Way known as the Upper Scorpius OB stellar association. At least 70, and as many as 170 of these Jupiter-sized planets have been found by examining data from over 20 years of observations. The first free-floating planets were discovered in the 1990s, but the latest findings have almost doubled the total number known. 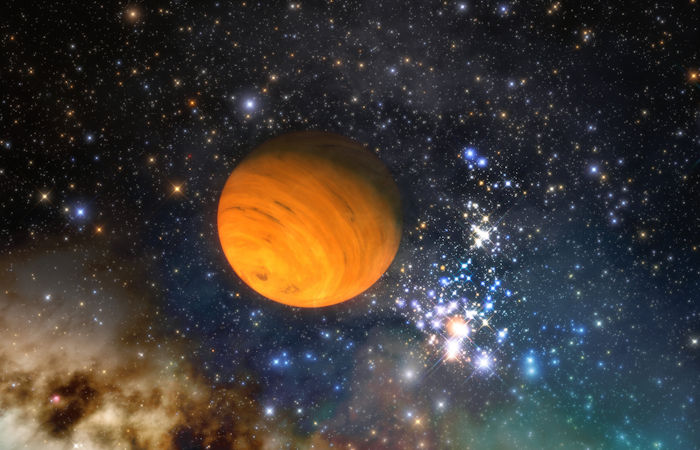 An artist’s impression of a free-floating planet. Using observations and archival data from several of NSF’s NOIRLab’s observatories, together with observations from telescopes around the world and in orbit, astronomers have discovered at least 70 new free-floating planets — planets that wander through space without a parent star — in a nearby region of the Milky Way known as Upper Scorpius OB stellar association. Credit: NOIRLab/NSF/AURA/J. da Silva

To find these planets, the study’s first author, Núria Miret-Roig of the Laboratoire d’Astrophysique de Bordeaux, at the University of Bordeaux in France, with a team of astronomers, used observations and archival data from a number of large observatories, including facilities from NSF’s NOIRLab, telescopes of the European Southern Observatory, the Canada-France-Hawaii Telescope, and the Subaru Telescope, amounting to 80,000 wide-field images over 20 years of observations.

Hervé Bouy, an astronomer at the Laboratoire d’Astrophysique de Bordeaux, and project leader of the research, says that the discovery of so many free-floating planets would not have been feasible without access to NOIRLab’s Astro Data Archive and Astro Data Lab Science Platform operated at the Community Science and Data Center (CSDC).

“The treasure trove available in the NOIRLab Astro Data Archive has been fundamental to this study,” Bouy says. “We needed very deep and wide-field images in both the optical and near-infrared, spanning a long time baseline. So the Dark Energy Camera and NEWFIRM were very appealing for our project because they are among the most sensitive wide-field cameras in the world.”

“This project illustrates the incredible importance of providing access to archival data from different telescopes, not just throughout the US, but worldwide,” says Chris Davis, Program Officer at the National Science Foundation for NSF’s NOIRLab. “This is something NOIRLab and specifically the CSDC has been working hard to enable over a number of years, and continues to do so with support from NSF.”

The free-floating planets lie in the Upper Scorpius OB association, which is 420 light-years away from Earth. This region contains a number of the most famous nebulae, including the Rho Ophiuchi cloud, the Pipe Nebula, Barnard 68, and the Coalsack.

Free-floating planets have mostly been discovered via microlensing surveys, in which astronomers watch for a brief chance alignment between an exoplanet and a background star. However, microlensing events only happen once, meaning follow-up observations are impossible.

These new planets were discovered using a different method. These planets, lurking far away from any star illuminating them, would normally be impossible to image. However, Miret-Roig and her team took advantage of the fact that, in the few million years after their formation, these planets are still hot enough to glow, making them directly detectable by sensitive cameras on large telescopes. Miret-Roig’s team used the 80,000 observations to measure the light of all the members of the association across a wide range of optical and near-infrared wavelengths and combined them with measurements of how they appear to move across the sky.

“We measured the tiny motions, the colors and luminosities of tens of millions of sources in a large area of the sky,” explains Miret-Roig. “These measurements allowed us to securely identify the faintest objects in this region.”

The discovery also sheds light on the origin of free-floating planets. Some scientists believe these planets can form from the collapse of a gas cloud that is too small to lead to the formation of a star, or that they could have been kicked out from their parent system. But which is the actual mechanism remains unknown.

It is expected that Vera C. Rubin Observatory could find many more free-floating planets when it begins scientific operations this decade.