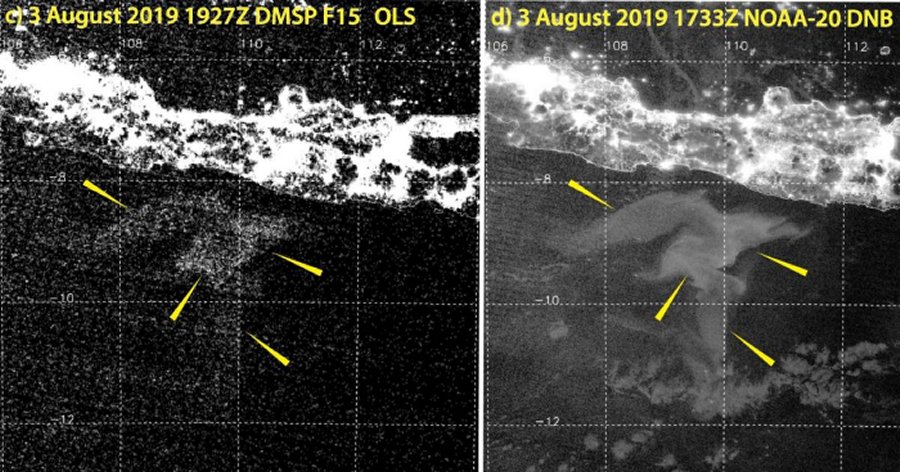 Milky seas are an elusive and rare display of bioluminescence in the Earth’s ocean, and the largest known form on our planet. Distinct from turbulent froth created by wakes of ships, milky seas achieve a long-lived, widespread, and uniform glow in the ocean’s surface that can persist for several nights, and span more than 100,000 square kilometers (almost 39,000 square miles) – about the size of the state of Kentucky.

Mariners experience these extraordinary conditions only in certain remote areas of the world—mainly in the northwest Indian Ocean offshore of the Horn of Africa, and in the waters surrounding Indonesia. Predicting when, where, and why milky seas form remains a modern-day scientific mystery.

Surreal descriptions of the fabled “milky sea,” which eyewitnesses say glows as bright as a snow field or a bed of clouds, has been shared among mariners throughout history, said Steve Miller, CIRA’s incoming director and lead author on the Scientific Reports paper. These stories found their way into seafaring adventure novels like Moby-Dick and Twenty Thousand Leagues Under the Seas, taking their place in folklore, but not so much in scientific observation.

In more than 200 recorded sightings dating back to the 19th century, only once, in 1985, did a research vessel sail through a milky sea. The water sample collected at the time suggested a strain of luminous bacteria, colonizing a bloom of algae at the water’s surface, created the glow. Some of the features of milky seas, however, are not adequately explained by this hypothesis—especially in the face of eyewitness accounts. 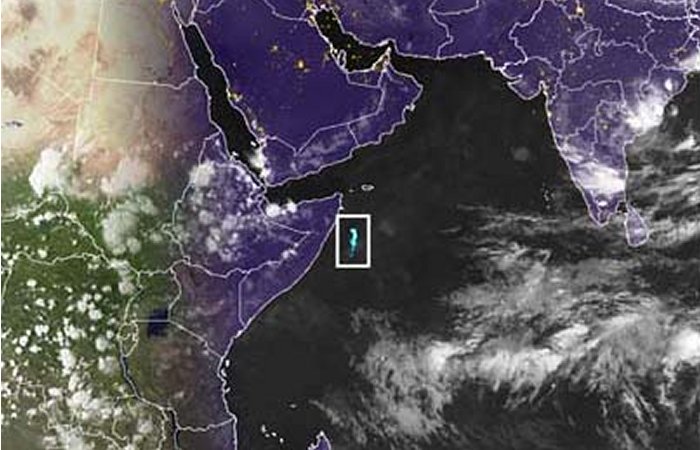 Bolstered by new observations from space, researchers are now positioned to understand much more about the circumstances of this fascinating phenomenon. From far above the world’s oceans, the Suomi NPP and NOAA-20 satellites collect imagery using a sophisticated suite of sensors, including the “Day/Night Band” instrument. The Day/Night Band detects very faint amounts of visible light at night, and peers through the darkness to reveal the glow of city lights, the flames of forest fires, and much more—including, now, the ability to see milky seas.

At CSU’s Cooperative Institute for Research in the Atmosphere (CIRA), researchers are constantly analyzing satellite data, including observations from the Day/Night Band. CIRA research using this instrument targeted changing city lights to demonstrate how the COVID-19 pandemic impacted human activity. Researchers have also used it to discover a new phenomenon of nighttime glowing in the Earth’s atmosphere.

“The Day/Night Band continues to amaze me with its ability to reveal light features of the night. Like Captain Ahab of Moby-Dick, the pursuit of these bioluminescent milky seas has been my personal ‘white whale’ of sorts for many years,” Miller said.

By carefully analyzing Day/Night Band observations from three locations where milky seas are often reported, Miller and his team located 12 occurrences of this elusive phenomenon between 2012 and 2021.

Catching the light created by milky seas requires patience—and the right conditions. Even faint moonlight reflecting off the ocean’s surface can mask the signal. Light emitted by the glowing upper atmosphere, both directly upward and as reflected by the clouds, can likewise contaminate observations. Researchers carefully analyzed signals in the satellite data to rule out other sources of light emission, and used sophisticated techniques to find the persistent bioluminescent structures emitting light beyond the background noise. 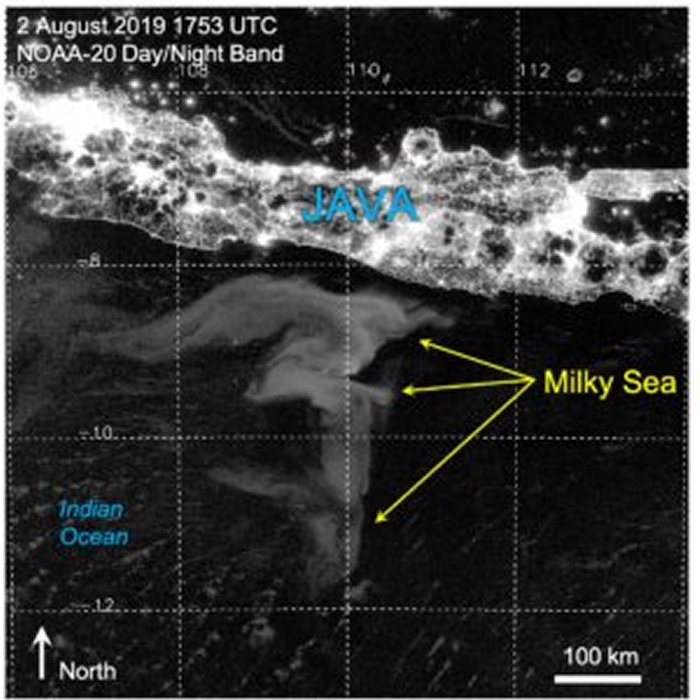 City lights of Java contrast with a large patch of ‘milky seas’ in this image from the Day/Night Band sensor. The area of the glowing sea surface here is greater than 100,000 square kilometers – nearly 25 million acres. Credit: Colorado State University

Appearing as a persistent glowing patch on the ocean at night, these glowing bodies of water move with ocean currents. Disappearing from view during the day—due to the overwhelming amount of light from the Sun compared to the faint glow from the ocean—these patches become visible again to the satellite at night.

“Milky seas are simply marvelous expressions of our biosphere whose significance in nature we have not yet fathomed,” Miller said. “Their very being spins an unlikely and compelling tale that ties the surface to the skies, the microscopic to the global scales, and the human experience and technology across the ages; from merchant ships of the 18th century to spaceships of the modern day. The Day/Night Band has lit yet another pathway to scientific discovery.”