Jan Bartek – AncientPages.com – This large woven basket is still in perfect condition despite being 10,500-year-old! It is now the world’s oldest woven basked and it was discovered in Muraba‘at Cave in Israel.

According to the Antiquities Authority, the basket was found empty and closed with a lid. Currently, it’s unknown what it once contained. 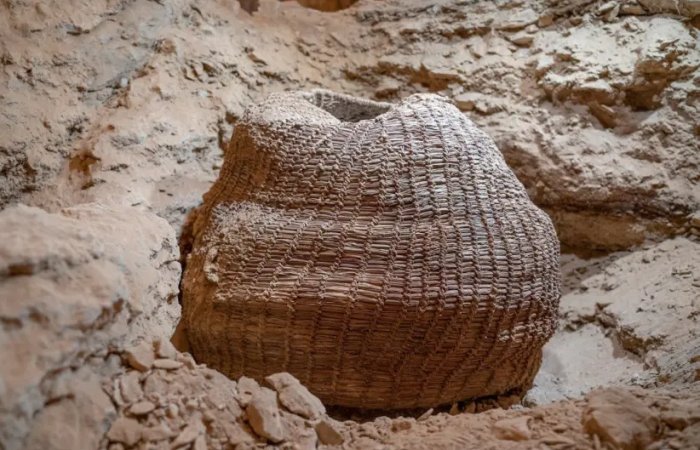 This 10,500-year-old basket as found in Muraba‘at Cave is now the world’s oldest woven basked ever discovered. Credit: Yaniv Berman/IAA

Scientists do not think those who produced the basked lived in the cave. It’s more likely it was used for storage, but why it ended up in the Judean cave is still an ancient mystery.

Materials from the basket have been analyzed and researchers concluded the woven basket was manufactured around 10,500 years ago during the Pre-Pottery Neolithic period. It was during this time, the world’s first town Jericho appeared in the Levant around 9,000 B.C.

“This is the most exciting discovery that I have encountered in my life.

The basket has a capacity of some 92 liters. We do not know yet which type of plant was used to make it, but we are looking into it.

However, we can already say that two people wove it, and that one of them was left-handed,” Dr. Haim Cohen said during a press briefing at the IAA lab in Jerusalem.

Archaeologists also discovered looters had been active in the close vicinity of the magnificent, ancient basket, but fortunately, they stopped excavating just before reaching it.

“The rescue operation aims at surveying hundreds of caves in the Judean Desert to trace and preserve the antiquities that are still hidden there before they are retrieved and sold on the private market, as has happened in the past.

“Organic materials usually do not have the ability to survive for such long periods,” Dr. Naama Sukenik from the IAA’s Organic Material Department told The Jerusalem Post.

“However, the special climatic condition of the Judean Desert, its dry weather, have allowed for dozens of artifacts to last for centuries and millennia.”

Among other items, the archaeologists have found fragments of textiles still carrying their bright colors dating back to the Roman period, parts of sandals, a small comb with 2,000-year-old lice stuck between its teeth, seeds, and pieces of rope.

Dozens of scroll fragments from a biblical scroll dating back some 2,000 years were also unearthed in the first discovery of its kind in decades.

About half of the area still remains to be surveyed and shed further light into life in Israel over the course of millennia.”