Don Wood – MessageToEagle.com – Our understanding of how the university works is still limited but we learn something new each day.

When researchers gauged the behavior of a subatomic particle called the muon, the results did not agree with theoretical calculations, posing a potential challenge to the Standard Model—our current understanding of how the universe works. The recent results of a study could be the beginning of a new physics. 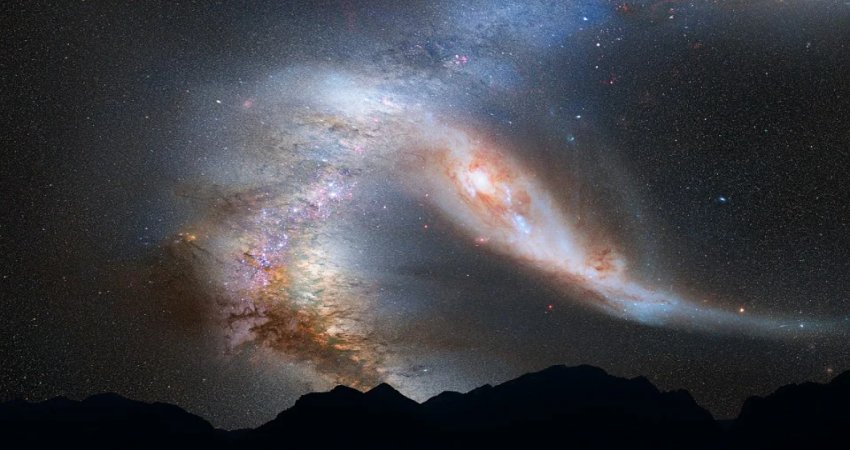 Ever since then, scientists around the world have been trying to verify this discrepancy and determine its significance. The answer could either uphold the Standard Model, which defines all of the known subatomic particles and how they interact, or introduce the possibility of an entirely undiscovered physics.

A multi-institutional research team has now used Argonne National Laboratory’s Mira supercomputer to help narrow down the possible explanations for the discrepancy, delivering a newly precise theoretical calculation that refines one piece of this very complex puzzle.

A muon is a heavier version of the electron and has the same electric charge. The measurement in question is of the muon’s magnetic moment, which defines how the particle wobbles when it interacts with an external magnetic field. The earlier Brookhaven experiment, known as Muon g-2, examined muons as they interacted with an electromagnet storage ring 50 feet in diameter. The experimental results diverged from the value predicted by theory by an extremely small amount measured in parts per million, but in the realm of the Standard Model, such a difference is big enough to be notable. 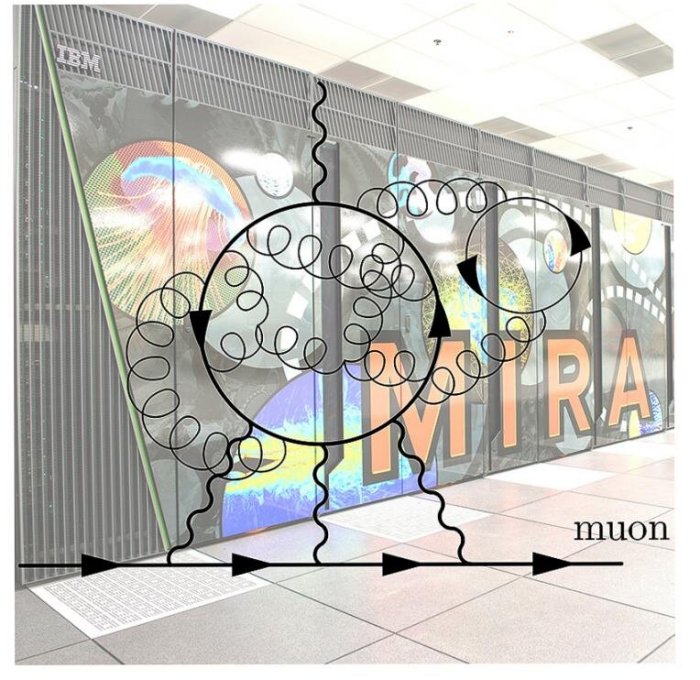 A typical diagrammatic representation of the hadronic light-by-light scattering contribution with Argonne’s Mira supercomputer in the background. Credit: Luchang Jin, University of Connecticut

“If you account for uncertainties in both the calculations and the measurements, we can’t tell if this is a real discrepancy or just a statistical fluctuation,” said Thomas Blum, a physicist at the University of Connecticut who co-authored the paper. “So both experimentalists and theorists are trying to improve the sharpness of their results.”

As Taku Izubuchi, a physicist at Brookhaven Lab who is a co-author on the paper, noted, “Physicists have been trying to understand the anomalous magnetic moment of the muon by comparing precise theoretical calculations and accurate experiments since the 1940s. This sequence of work has led to many discoveries in particle physics and continues to expand the limits of our knowledge and capabilities in both theory and experiment.”

What Is The Source Of The Anomalous High-Energy Signals In Antarctica?

If the discrepancy between experimental results and theoretical predictions is indeed real, that would mean some other factor—perhaps some yet-to-be discovered particle—is causing the muon to behave differently than expected, and the Standard Model would need to be revised.

The team’s work centered on a notoriously difficult aspect of the anomaly involving the strong force, which is one of four basic forces in nature that govern how particles interact, along with weak, electromagnetic, and gravitational force. The biggest uncertainties in the muon calculations come from particles that interact through the strong force, known as hadronic contributions. These hadronic contributions are defined by a theory called quantum chromodynamics (QCD).

The researchers used a method called lattice QCD to analyze a type of hadronic contribution, light-by-light scattering. “To do the calculation, we simulate the quantum field in a small cubic box that contains the light-by-light scattering process we are interested in,” said Luchang Jin, a physicist at the University of Connecticut and paper co-author. “We can easily end up with millions of points in time and space in the simulation.”

That’s where Mira came in. The team used the supercomputer, housed at the Argonne Leadership Computing Facility (ALCF), to solve the complex mathematical equations of QCD, which encode all possible strong interactions with the muon. The ALCF, a DOE Office of Science User Facility, recently retired Mira to make room for the more powerful Aurora supercomputer, an exascale system scheduled to arrive in 2021.

“Mira was ideally suited for this work,” said James Osborn, a computational scientist with the ALCF and Argonne’s Computational Science division. “With nearly 50,000 nodes connected by a very fast network, our massively parallel system enabled the team to run large simulations very efficiently.”

After four years of running calculations on Mira, the researchers produced the first-ever result for the hadronic light-by-light scattering contribution to the muon anomalous magnetic moment, controlling for all errors.

Meanwhile, a new version of the Muon g-2 experiment is underway at Fermi National Accelerator Laboratory, aiming to reduce uncertainty on the experimental side by a factor of four. Those results will add more insight to the theoretical work being done now.

“As far as we know, the discrepancy still stands,” Blum said. “We are waiting to see whether the results together point to new physics, or whether the current Standard Model is still the best theory we have to explain nature.”