Eddie Gonzales Jr. – MessageToEagle.com – A star known as SAO 244567, had a typical behavior for a very long time.

In a few decades, however,  the star, which lies at the center of Hen 3-1357, commonly known as the Stingray Nebula rapidly changed. 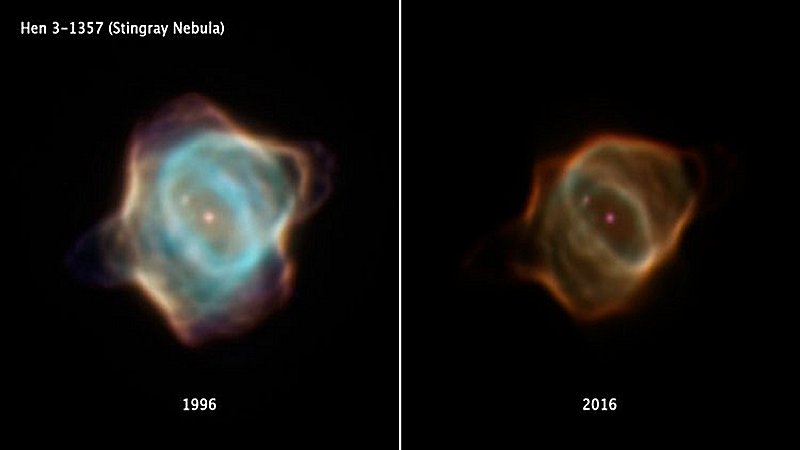 The Stingray Nebula is a planetary nebula — an expanse of material sloughed off from a star as it enters a new phase of old age and then heated by that same star into colorful displays that can last for up to a million years.

A team of astronomers recently analyzed a more recent image of the nebula, taken in 2016 by Hubble, and found something unexpected –  the Stingray Nebula has faded significantly and changed shape over the course of just 20 years.

If dimming continues at current rates, in 20 or 30 years the Stingray Nebula will be barely perceptible and was likely already fading when Hubble obtained the first clear images of it in 1996, according to lead author Bruce Balick, an emeritus professor of astronomy at UW.

“This is an unprecedented departure from typical behavior for a planetary nebula,” said Balick.

“Over time, we would expect it to imperceptibly brighten and expand, which could easily go unnoticed in a century or more. But here we’re seeing the Stingray nebula fade significantly in an incredibly compressed time frame of just 20 years. Moreover, its brightest inner structure has contracted — not expanded — as the nebula fades.”

The tiny Stingray Nebula unexpectedly appeared in the 1980s and was first imaged by scientists in the 1990s using NASA’s Hubble Space Telescope. It is by far the youngest planetary nebula in our sky.

Balick and his co-authors, Martín Guerrero at the Institute of Astrophysics of Andalusia in Spain and Gerardo Ramos-Larios at the University of Guadalajara in Mexico, compared Hubble images of the Stingray Nebula taken in 1996 and 2016. Hen 3-1357 changed shape markedly over 20 years, losing the sharp, sloping edges that gave the Stingray Nebula its name. Its colors have faded overall and once-prominent blue expanses of gas near its center are largely gone.

“In a planetary nebula, the star is really the center of all the activity,” said Balick. “The material around it is directly responsive to the energy from its parent star.”

Astronomers have yet to understand why SAO 244567 made the Stingray Nebula light up and then fade almost as quickly.

One theory, posited by a team led by Nicole Reindl at the University of Potsdam, is that the star underwent a brief burst of fresh helium fusion around its core, which stirred up its outer layers and caused its surface to both shrink and heat.

If so, then as its outer layers settle back down, the star may return to a more typical transition from red giant to white dwarf. Only future observations of the star and its nebula can confirm this.

“Unfortunately, the best tool to follow future changes in the Stingray Nebula, the Hubble Space Telescope, is near the end of its life as well,” said Balick.

“We can hope, but the odds aren’t good for Hubble’s survival as its three remaining gyroscopes start to fail. It’s a good race to the finish.”

On This Day In History: Alexander The Great Died In Babylon – On June 11, 323 BC