MessageToEagle.com – By now we’re used to the idea that the world has four dimensions: three spatial and one temporal. But what if there were a fifth dimension – what would that dimension look like, and how would it relate to time?

One of the central threads running through the philosophy of time concerns the idea that time flows. This doesn’t sound controversial: for most people, it flows in much the same way as a river.

But there are problems with this view.

If time flows, it’s surely reasonable to wonder about the rate it flows at. 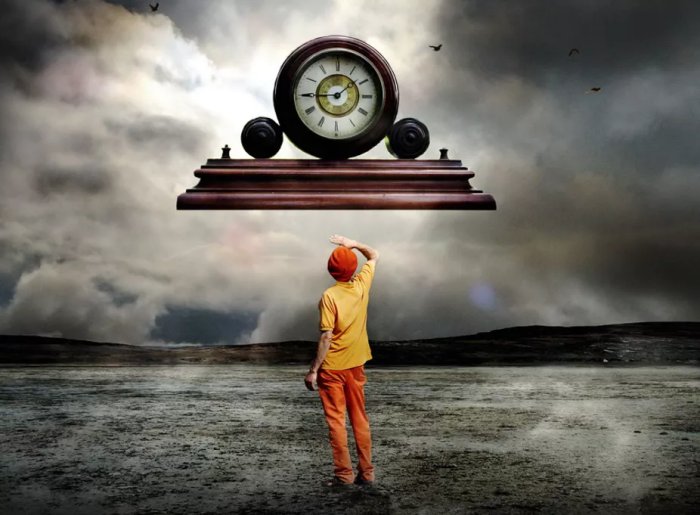 But rates of flow are construed as ratios over time – a river flows at one metre per unit of time, say – so it would seem time should also flow at some rate over time: one second per second.

This doesn’t work, though: it’s like saying that, for every dollar you give me, I give you a dollar back: what could be gained in such a transaction?

We commonly think of time flowing into the future, away from the past, but time wouldn’t “go anywhere” if it flowed at one second per second.

One option might be to construe the flow of time as a ratio of time over space, so that time flows, for example, at one second per metre.

But this too would be pretty odd: treating time as dependent on space in this fashion flies in the face of our intuitive understanding of its nature.

Another alternative might be to invoke a further temporal dimension – a fifth dimension – which can then be used as the yardstick for measuring temporal flow.

In Higher Dimensions We Could See Past, Present And Future Events Simultaneously

Existence Of Time – One Of The Greatest Mysteries Of The Universe

Appealing to a fifth dimension in this fashion is often seen as a strategy of last resort by philosophers of time: the idea is simply too wild to take seriously.

It has been predicted that the Large Hadron Collider in Switzerland might generate particles that time-travel by taking shortcuts through a fifth dimension.

Unfortunately, according to the physicists responsible for the relevant experimental predictions, the fifth dimension is spatial, not temporal.

Even if the fifth dimension were temporal, there’d still be a problem. This is because the experimental predictions conducted so far are produced against the backdrop of a particular physical theory: general relativity.

General relativity undermines any basis we might have for believing that time flows at all, as it’s portrayed as a space-like dimension. This means that, very roughly, we should think time flows only if it’s coherent to think of space flowing, which seems implausible.

On the plus side …

Perhaps we have reason to take heart. Although general relativity plays a role in relevant experimental predictions, those predictions are actually coming from a particular theory of quantum gravity: string theory.

This theory reconciles our best theories of the very big (general relativity) with the very small (quantum theory).

Some versions of string theory posit as many as 11 dimensions.

With so many, surely it’ll be possible to make some sense of the idea that time flows … won’t it?