MessageToEagle.com – Scientists have previously said that about 50% of the Earth’s water may be older than the Solar System itself. It sounds amazing and researchers have long tried to figure out how and when Earth’s got its water.

A new theory may now shed more light on this scientific riddle. In a new study in the Journal of Geophysical Research: Planets, a journal of the American Geophysical Union, researchers propose that Earth’s water may have originated from both asteroidal material and gas left over from the formation of the Sun. 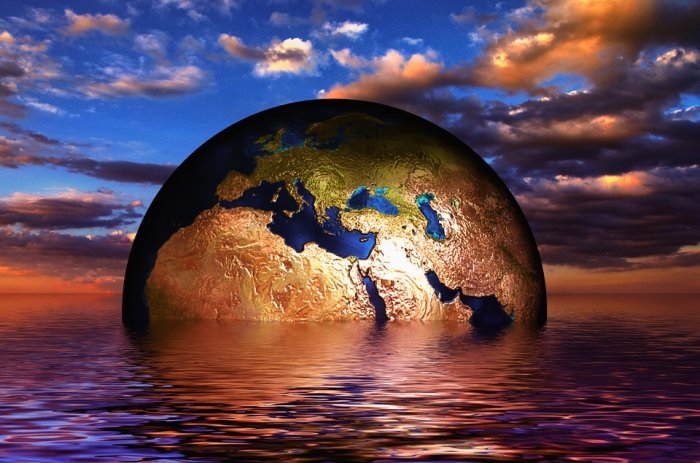 The new study challenges widely-accepted ideas about hydrogen in Earth’s water by suggesting the element partially came from clouds of dust and gas remaining after the Sun’s formation, called the solar nebula.

To identify sources of water on Earth, scientists have searched for sources of hydrogen rather than oxygen, because the latter component of water is much more abundant in the solar system.

Many scientists have historically supported a theory that all of Earth’s water came from asteroids because of similarities between ocean water and water found on asteroids. The ratio of deuterium, a heavier hydrogen isotope, to normal hydrogen serves as a unique chemical signature of water sources. In the case of Earth’s oceans, the deuterium-to-hydrogen ratio is close to what is found in asteroids.

But the ocean may not be telling the entire story of Earth’s hydrogen, according to the study’s authors.

“When people measure the [deuterium-to-hydrogen] ratio in ocean water and they see that it is pretty close to what we see in asteroids, it was always easy to believe it all came from asteroids.”

More recent research suggests hydrogen in Earth’s oceans does not represent hydrogen throughout the entire planet, the study’s authors said. Samples of hydrogen from deep inside the Earth, close to the boundary between the core and mantle, have notably less deuterium, indicating this hydrogen may not have come from asteroids. Noble gases helium and neon, with isotopic signatures inherited from the solar nebula, have also been found in the Earth’s mantle.

In the new study, researchers developed a new theoretical model of Earth’s formation to explain these differences between hydrogen in Earth’s oceans and at the core-mantle boundary as well as the presence of noble gases deep inside the planet.

According to their new model, several billion years ago, large waterlogged asteroids began developing into planets while the solar nebula still swirled around the Sun. These asteroids, known as planetary embryos, collided and grew rapidly. Eventually, a collision introduced enough energy to melt the surface of the largest embryo into an ocean of magma. This largest embryo would eventually become Earth.

Gases from the solar nebula, including hydrogen and noble gases, were drawn in by the large, magma-covered embryo to form an early atmosphere. Nebular hydrogen, which contains less deuterium and is lighter than asteroidal hydrogen, dissolved into the molten iron of the magma ocean.

Through a process called isotopic fractionation, hydrogen was pulled towards the young Earth’s center. Hydrogen, which is attracted to iron, was delivered to the core by the metal, while much of the heavier isotope, deuterium, remained in the magma which eventually cooled and became the mantle, according to the study’s authors. Impacts from smaller embryos and other objects then continued to add water and overall mass until Earth reached its final size. 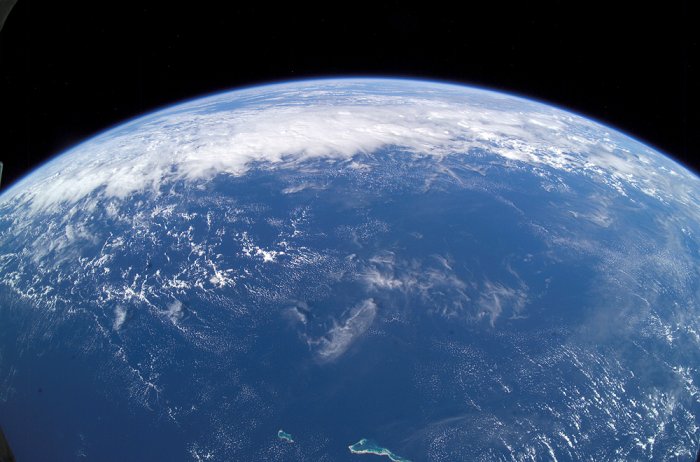 This view of Earth’s horizon was taken by an Expedition 7 crewmember onboard the International Space Station, using a wide-angle lens while the Station was over the Pacific Ocean. Credit: NASA

This new model would leave Earth with noble gases deep inside its mantle and a lower deuterium-to-hydrogen ratio in its core than in its mantle and oceans.

The authors used the model to estimate how much hydrogen came from each source. They concluded most was asteroidal in origin, but some of Earth’s water did come from the solar nebula.

“For every 100 molecules of Earth’s water, there are one or two coming from solar nebula,” said Jun Wu, assistant research professor in the School of Molecular Sciences and School of Earth and Space Exploration at Arizona State University and lead author of the study.

The study also offers scientists new perspectives about the development of other planets and their potential to support life, the authors said. Earth-like planets in other solar systems may not all have access to asteroids loaded with water. The new study suggests these exoplanets could have obtained water through their system’s own solar nebula.

“This model suggests that the inevitable formation of water would likely occur on any sufficiently large rocky exoplanets in extrasolar systems,” Wu said. “I think this is very exciting.”

Water And Its Secrets: Water Has A Memory Far Longer Than Our Transient Lifetimes

Anat Shahar, a geochemist at the Carnegie Institution for Science, who was not involved with the study, noted the hydrogen fractionation factor, which describes how the deuterium-to-hydrogen ratio changes when the element dissolves in iron, is currently unknown and difficult to measure. For the new study, this property of hydrogen had to be estimated.

The new model, which fits in well with current research, could be tested once experiments reveal the hydrogen fractionation factor, Shahar said.

“This paper is a very creative alternative to what is an old problem,” Shahar said. “The authors have done a good job of estimating what these different fractionation factors would be without having the experiments.”