Eddie Gonzales Jr. – MessageToEagle.com – New scientific results confirm an anomaly seen in previous experiments, which may point to an as-yet-unconfirmed new elementary particle, the sterile neutrino, or indicate the need for a new interpretation of an aspect of standard model physics, such as the neutrino cross section, first measured 60 years ago. 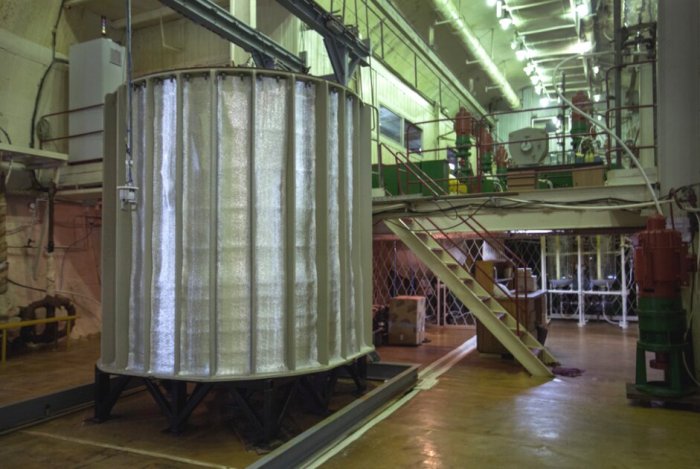 Located deep underground at the Baksan Neutrino Observatory in the Caucasus mountains in Russia, the completed two-zone gallium target, at left, contains an inner and outer tank of gallium, which is irradiated by an electron neutrino source. Credit: A. A. Shikhin

Los Alamos National Laboratory is the lead American institution collaborating on the Baksan Experiment on Sterile Transitions (BEST) experiment, results of which were recently published in the journals Physical Review Letters and Physical Review C.

“The results are very exciting,” said Steve Elliott, lead analyst of one of the teams evaluating the data and a member of the Los Alamos Physics division. “This definitely reaffirms the anomaly we’ve seen in previous experiments. But what this means is not obvious. There are now conflicting results about sterile neutrinos. If the results indicate fundamental nuclear or atomic physics are misunderstood, that would be very interesting, too.” Other members of the Los Alamos team include Ralph Massarczyk and Inwook Kim.

More than a mile underground in the Baksan Neutrino Observatory in Russia’s Caucasus Mountains, BEST used 26 irradiated disks of chromium 51, a synthetic radioisotope of chromium and the 3.4 megacurie source of electron neutrinos, to irradiate an inner and outer tank of gallium, a soft, silvery metal also used in previous experiments, though previously in a one-tank set-up. The reaction between the electron neutrinos from the chromium 51 and the gallium produces the isotope germanium 71.

The measured rate of germanium 71 production was 20–24% lower than expected based on theoretical modeling. That discrepancy is in line with the anomaly seen in previous experiments.

BEST builds on a solar neutrino experiment, the Soviet-American Gallium Experiment (SAGE), in which Los Alamos National Laboratory was a major contributor, starting in the late 1980s. That experiment also used gallium and high intensity neutrino sources. The results of that experiment and others indicated a deficit of electron neutrinos—a discrepancy between the predicted and the actual results that came to be known as the “gallium anomaly.” An interpretation of the deficit could be evidence for oscillations between electron neutrino and sterile neutrino states.

The same anomaly recurred in the BEST experiment. The possible explanations again include oscillation into a sterile neutrino. The hypothetical particle may constitute an important part of dark matter, a prospective form of matter thought to make up the vast majority of the physical universe. That interpretation may need further testing, though, because the measurement for each tank was roughly the same, though lower than expected.

Other explanations for the anomaly include the possibility of a misunderstanding in the theoretical inputs to the experiment—that the physics itself requires reworking. Elliott points out that the cross section of the electron neutrino has never been measured at these energies. For example, a theoretical input to measuring the cross section, which is difficult to confirm, is the electron density at the atomic nucleus.

The experiment’s methodology was thoroughly reviewed to ensure no errors were made in aspects of the research,

such as radiation source placement or counting system operations. Future iterations of the experiment, if carried out, may include a different radiation source with higher energy, longer half life, and sensitivity to shorter oscillation wave lengths.