Eddie Gonzales Jr. – MessageToEagle.com – Scientists have discovered one of the smallest black holes on record—and the closest one to Earth found to date. Found in the constellation Monoceros, the black has been dubbed – “The Unicorn”.

“When we looked at the data, this black hole—the Unicorn—just popped out,” said lead author Tharindu Jayasinghe, a doctoral student in astronomy at The Ohio State University and an Ohio State presidential fellow. 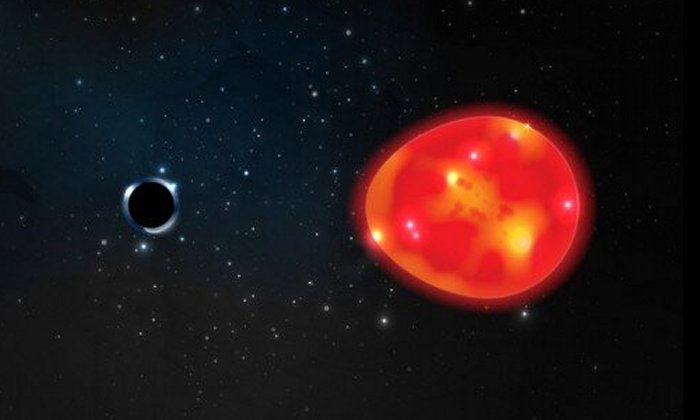 The Unicorn is about three times the mass of our sun—tiny for a black hole. Very few black holes of this mass have been found in the universe. This black hole is 1,500 light-years away from Earth, still inside the Milky Way galaxy. And, until Jayasinghe started analyzing it, it was essentially hiding in plain sight.

The black hole appears to be a companion to a red giant star, meaning that the two are connected by gravity. Scientists can’t see the black hole—they are, by definition, dark, not only visually, but to the tools astronomers use to measure light and other wavelengths.

But in this case, they can see the black hole’s companion star. That star had been well-documented by telescope systems including KELT, run out of Ohio State; ASAS, the precursor to ASAS-SN, which is now run out of Ohio State, and TESS, a NASA satellite that searches for planets outside our solar system. Data about it had been widely available but hadn’t yet been analyzed in this way.

When Jayasinghe and the other researchers analyzed that data, they noticed something they couldn’t see appeared to be orbiting the red giant, causing the light from that star to change in intensity and appearance at various points around the orbit.

Something, they realized, was tugging at the red giant and changing its shape. That pulling effect, called a tidal distortion, offers astronomers a signal that something is affecting the star. One option was a black hole, but it would have to be small—less than five times the mass of our sun, falling into a size window that astronomers call the “mass gap.” Only recently have astronomers considered it a possibility that black holes of that mass could exist.

“When you look in a different way, which is what we’re doing, you find different things,” said Kris Stanek, study co-author, an astronomy professor at Ohio State and university distinguished scholar. “Tharindu looked at this thing that so many other people had looked at and instead of dismissing the possibility that it could be a black hole, he said, ‘Well, what if it could be a black hole?'”

The findings are publishing in the journal Monthly Notices of the Royal Astronomical Society.