Eddie Gonzales Jr. – MessageToEagle.com – A gigantic aquifer of relatively fresh water trapped in porous sediments lying below the salty ocean, has been discovered by a team of scientists at Columbia University. 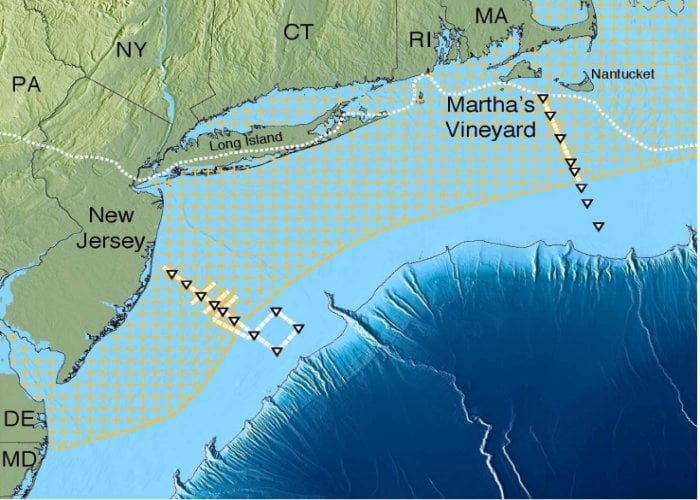 Scientists have mapped a huge aquifer off the US Northeast (hatched area). Solid yellow or white lines with triangles show ship tracks. Dotted white line near shore shows edge of the glacial ice sheet that melted about 15,000 years ago. Further out, dark blue, the continental shelf drops off into the Atlantic abyss. Credit: Gustafson et al., Scientific Reports, 2019

The aquifer – the largest yet found in the world – stretches from the shore at least from Massachusetts to New Jersey, extending more or less continuously out about 50 miles to the edge of the continental shelf.

Researchers say that if found on the surface, it would create a lake covering some 15,000 square miles. At the same time, they add that similar aquifers may lie off the coast of other land

The study suggests that such aquifers probably lie off many other coasts worldwide.

The researchers employed innovative measurements of electromagnetic waves to map the water, which remained invisible to other technologies.

“We knew there was fresh water down there in isolated places, but we did not know the extent or geometry,” lead author Chloe Gustafson, a Ph.D. candidate at Columbia University’s Lamont-Doherty Earth Observatory, said in a press release. 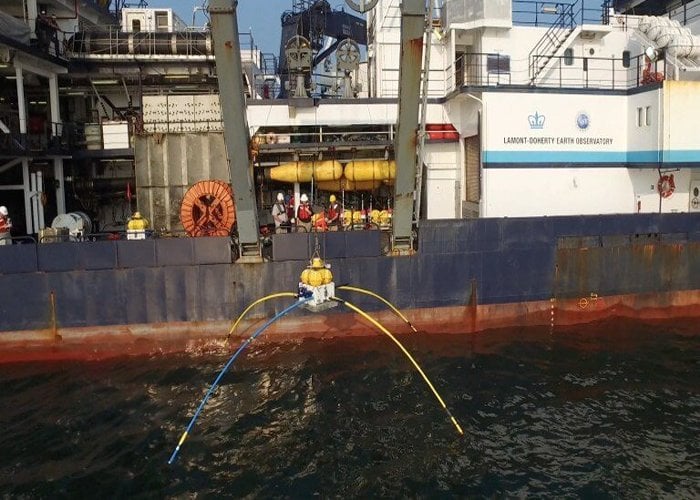 An electromagnetic receiver used in the study being deployed off the research vessel Marcus Langseth. Credit: Kerry Key

“It could turn out to be an important resource in other parts of the world.”

The first hints of the aquifer came in the 1970s, and now to map the aquifer, researchers dropped their equipment to take indispensable measurements.

The results show that fresh water sediments continuously span not just New Jersey and much of Massachusetts, but the intervening coasts of Rhode Island, Connecticut and New York.

They estimate that the region holds at least 670 cubic miles of fresh water, and the water starts at approx. 600 feet and extends 1,200 feet below the ground and just out as far as 75 miles into the continental shelf.

If future research shows the aquifer extends further north and south, it would rival the great Ogallala Aquifer, which supplies vital groundwater to eight Great Plains states, from South Dakota to Texas.

Some 15,000 to 20,000 years ago, toward the end of the last glacial age, much of the world’s water was locked up in mile-deep ice; in North America, it extended through what is now northern New Jersey, Long Island and the New England coast.

The aquifer is also being fed by modern subterranean runoff from the land.